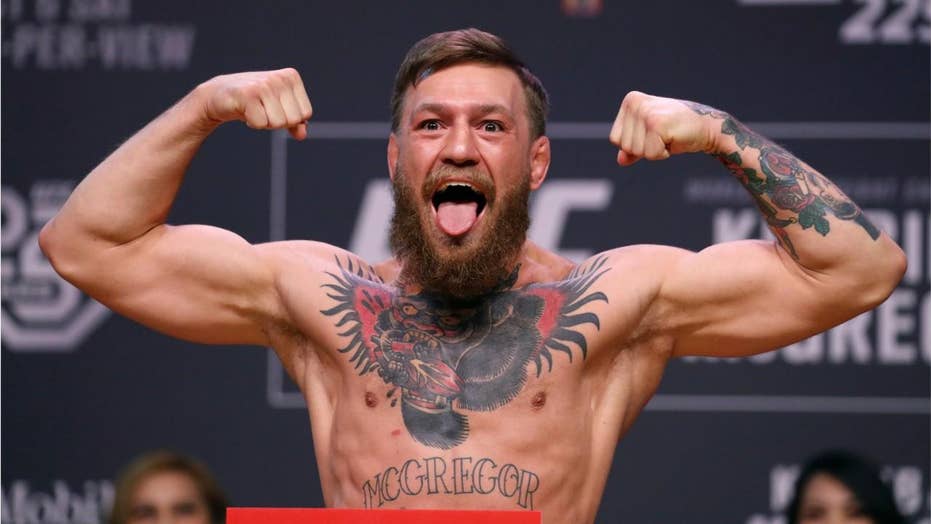 UFC's Conor McGregor mocks Mark Wahlberg, challenges actor to a fight 'for all the shares'

MMA fighter Conor McGregor threw shade at Hollywood actor Mark Wahlberg on Saturday on Twitter while inviting him to a battle over his stake in the UFC.

It looks like MMA fighter Conor McGregor is already ready to come out of retirement.

The former UFC featherweight and lightweight champion threw shade at Hollywood actor Mark Wahlberg on Saturday while inviting him to a battle over his stake in the fight promoting company.

"I’ve decided to challenge Hollywood actress Mark Walhberg next. A fight for all the shares!" McGregor tweeted, earning more than 8,300 retweets and 73,000 likes as of Monday afternoon.

Some encouraged Wahlberg — who's one of 23 celebrity shareholders in the company, according to Business Insider — to accept McGregor's offer.

But others cautioned the MMA fighter that Walhberg could be victorious.

"You must not know what this man is capable of," one fan wrote.

"Don’t you dare come at Marky Mark or you’ll hear from the Funky Bunch," another added.

"I love you and respect a fellow Irishman, but disrespecting Marky Mark is where I draw the line," a third chimed in.

Another UFC fan then advised McGregor to watch the 2010 thriller "Four Brothers," starring Wahlberg as a hotheaded hockey player.

"I’ll smack him and his 4 brothers around. It wouldn’t be the first crew of brothers I’ve smacked around. Check the history books. The UFC history books," McGregor fired back, pointing at his fighting record. Wahlberg has yet to respond to McGregor's challenge.

The 30-year-old McGregor is the most famous fighter in his sport, but he hasn't won a fight since November 2016 — when he beat Eddie Alvarez to become the first UFC fighter to hold championship belts in two divisions simultaneously. His only fight in 2017 was a loss to boxer Floyd Mayweather in the richest fight in boxing history.

McGregor announced his retirement (for the second time) on social media last week.

"I've decided to retire from the sport formally known as 'Mixed Martial Art' today," he wrote on Twitter, wishing his "old colleagues well going forward in [the] competition."

The fighter has been vocal about his desire to own a portion of the company in recent years.

"Me sliding into the co-main event ... it’s now boosting [the UFC's] brand over fighter rhetoric that they have. And, there's no problem with that," said Conor McGregor in a March video taken by BJPenn.com's Mike Pendleton, according to TMZ Sports. "If they want me to push that and I have no problem with pushing that, give me my rightful shares in the UFC company. That’s all I ask."