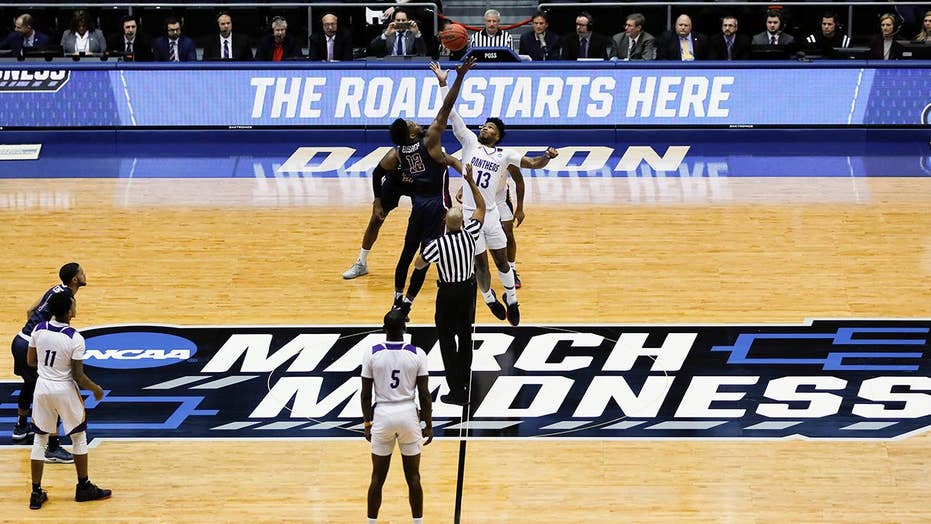 Place your bets: March Madness by the numbers

University at California at Irvine coach Russell Turner said he thought he was helping distract one of the Oregon Ducks' star players by chanting out the nickname "Queen" — a riff off forward Louis King's surname — during a tense NCAA tournament game Sunday.

Turner made the revelation about the label while discussing his team's 73-54 loss. He reportedly said during a news conference afterward that he continuously told his team to "double-team Queen" to get inside the 19-year-old's head. The news came as a shock to March Madness fans, who subsequently blasted the veteran basketball coach for commentary they considered "misogynistic" and "homophobic."

On Monday, Turner apologized for his remarks, admitting his "actions were inappropriate and insensitive."

"I share UC Irvine's belief that inclusivity and diversity are paramount values, and I apologize for not understanding that my actions during the game suggested otherwise," Turner said in an online statement released by the school.

The coach said he has since reached out to King, his parents and Oregon's head coach Dana Altman to address the situation and ask for forgiveness — which, he says, they have "graciously" offered.

"Coach Turner reached out today to express his apology to Louis and the King family, as well as the staff and program for in-game comments. He reiterated they were not meant to offend. All parties accepted the apology and are moving past the issue," Oregon Men's Basketball confirmed in a Twitter statement Monday night.

"I take seriously my responsibility as a campus and community leader, and I regret that my actions during the Oregon game did not meet the standard of leadership I should consistently set. For that, I apologize to the UC Irvine community, including the student-athletes and coaches of our men's basketball program. When student-athletes on our team make mistakes, I expect them to take responsibility and to learn from their mistakes in order to improve themselves. I will do the same. I accept full responsibility for my ill-considered actions, and I will learn from this situation to be a more thoughtful coach and competitor," Turner concluded.

Turner previously said the nickname was simply intended to "irritate" the player, adding that it was never meant to be offensive.

“We were calling him ‘Queen’ because I knew it might irritate him, because of how important he is to their team — the queen in chess. It was a play on his name of King," Turner said during the Sunday news conference, according to The Washington Post.

Regardless of his explanation, many fans were upset — King's mother, Ativea, included.

"Since Russel Turner decided it was ok to try and publicly humiliate my son by calling him queen although he doesn’t get fazed by it. Me and his dad as his parents would like for him to publicly APOLOGIZE to louis. It was in poor taste. The incident is trending all over Twitter," a Twitter account reportedly belonging to Ativea stated in a tweet. "Now what if people just start randomly calling him Queen can we thank him for that?"

"I agree with you Ativea. We ALL know what he really meant by that in today's world, that's not cool at all. That's not how champions win. That's not how leaders should lead. That's not right in a world where we need to be more inclusive," a Twitter user replied in the thread.

"Poor taste and classless. I’d be disappointed if he coached my team," another echoed.