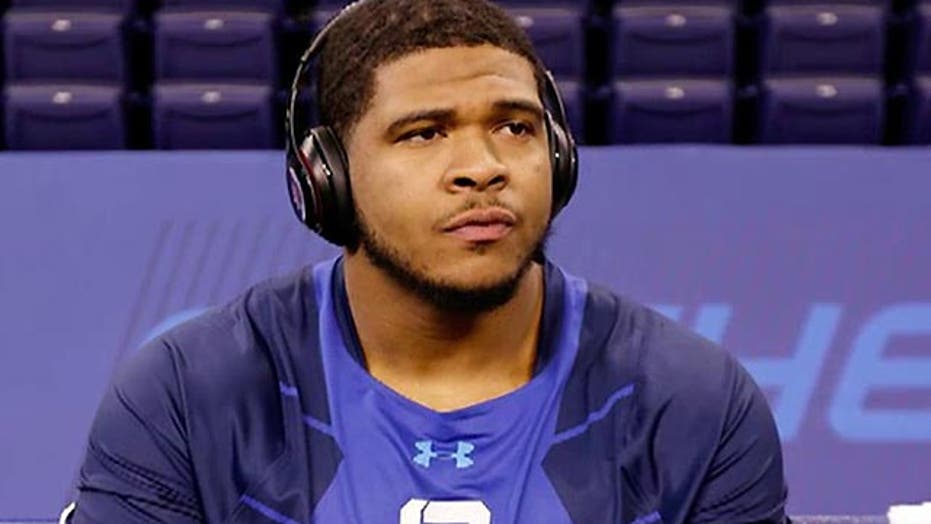 With just hours left to clear his name and millions of dollars on the line in Thursday night's NFL draft, a prospect expected to be among the first players selected abruptly left the Chicago event to go home to Louisiana to talk to police who are probing the murder of a pregnant woman believed to be his ex-girlfriend.

With millions of dollars potentially on the line, La'el Collins, a three-year starter at offensive tackle for LSU, is hoping to clear his name ahead of tonight's first round selections, according to the Baton Rouge Advocate. Some scouts have him rated as the top lineman in the annual draft, and top picks typically attend the event, which draws a huge television audience.

It was unclear when Collins would meet with police, the paper reported. As of Wednesday evening, neither Collins nor his attorney had contacted detectives to schedule an interview, said Lt. Jonny Dunnam, a Baton Rouge police spokesman.

Collins has not been named as a suspect in the shooting of Brittney Mills, 29, Friday night in the doorway of her Baton Rouge home, but police in Baton Rouge have said they want to talk to him. Collins, 21, is believed to have been romantically linked to Mills, but it is unclear if the baby, who survived, is his.

“There are numerous other people who are going to be interviewed,” Dunnam told the Baton Rouge Advocate. “So he is one of many.”

NFL.com's Ian Rapoport tweeted that Collins would submit to a paternity test to determine if he is the father of the boy.

First responders who arrived at Mills' apartment shortly after 10:30 p.m. Friday found the residence door ajar and Mills, who was eight months' pregnant, dead from multiple gunshot wounds to the torso. Mills' body was rushed to a hospital, where her unborn son was successfully delivered. On Saturday, his condition stabilized, and officials say he is expected to live.

Another Baton Rouge Police spokesman, Don Coppola, told The Times of Shreveport the department's desire to talk to Collins does not mean he is being eyed as a possible suspect.

“Let me emphasize that La’el Collins is not a suspect,” Coppola said. “But we know he had some type of past with this young lady. We want to talk to as many people who knew her as possible to try to find out who is responsible for killing Miss Mills. The more friends and acquaintances we can talk to would be helpful.”

Jim Boren, the attorney for the 6 foot, 5 inch, 305-pound Collins, said earlier this week he has been in touch with Baton Rouge detectives and said Collins, who is in Chicago to attend the draft, will cooperate. Boren, who called the timing of the investigation "poor," said a private investigator was hired to check out Collins' alibi and determined he was nowhere near the murder scene. Police believe Mills let someone she may have known into her apartment.

"We have identified where La'el was the day the lady was murdered to establish he was nowhere around," Boren told ESPN. "We have offered to give names, witnesses who can vouch for his whereabouts that day until after the woman's body was discovered."

Boren said Collins will meet with police when he returns to Louisiana following the draft.

The Times-Picayune reported that Collins is a former Eagle Scout whose background NFL scouts have described as squeaky-clean. But having his name mentioned in the context of a murder probe could scare teams from drafting him, according to NFL experts.

NFL.com draft guru Mike Mayock said some teams will not choose Collins at any point in the seven-round draft unless he is unequivocally cleared by police. Salaries for players NFL rookies are largely set in stone, with rookies signing four-year contracts that go down commensurate with where in the draft they are selected. First-round picks in 2014 were signed for between $6.8 million and $22.2 million over four years, depending on where they were picked. But players selected after the first round, or undrafted players who later sign with teams, make substantially less.

“La’el is one of the finest kids I’ve been around," Cameron said. "I think the NFL feels the same way. We’re looking forward to him having a long NFL career.”

The first round of the draft begins Thursday at 8 p.m. Rounds 2 and 3 take place Friday and 4-7 on Saturday. This year, the draft is being held in Chicago, the first time it has taken place outside of New York. More than 32 million people tuned in last year to watch the first-round selections.