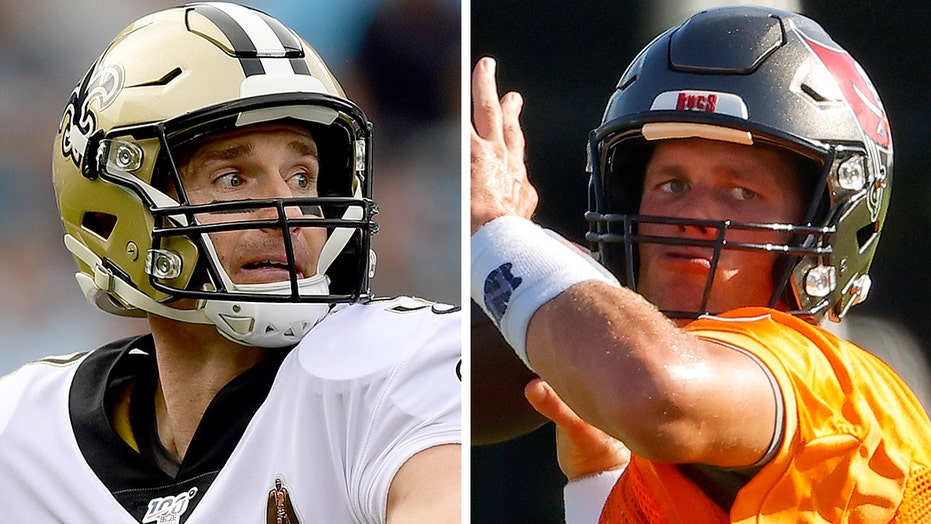 For the first time in 20 years, Tom Brady will be wearing a different uniform on Sundays.

The world has become so accustomed to Brady wearing his No. 12 jersey with the logo of the New England Patriots, the franchise he guided to six Super Bowl titles after they selected him in the sixth round of the 2000 NFL Draft. But in 2020, one of the most odd years in recent memory, Brady’s decision to leave comes as no surprise.

This Week 1 showdown on FOX at 4:25 . .ET will feature two of the greatest quarterbacks of this era and the NFL’s top two all-time passing yards leaders. Brees is No. 1 with 77,416 yards, and Brady is No. 2 with 74,571 yards. Brees also holds NFL records for completions and touchdown passes.

NEW ORLEANS SAINTS: WHAT TO KNOW ABOUT THE TEAM'S 2020 SEASON

Brees, who has led the Saints to three straight NFC North titles, will have his work cut out for him this year, especially since many think their window for a championship is nearly closed. The Saints, coming off back-to-back 13-3 finishes, have been the division's only winning team the last two seasons.

New Orleans has been on the wrong side of every result in the playoffs in recent memory. Three years ago, the Saints gave up a Hail Mary to the Minnesota Vikings, and wide receiver Stefon Diggs as time expired. The following season, a horrendous no-call in the NFC title game against the Los Angeles Rams prevented the Saints from reaching the Super Bowl, and last year, New Orleans once again fell at the hands of the Vikings, led by quarterback Kirk Cousins, who guided Minnesota to an overtime victory.

TAMPA BAY BUCCANEERS: WHAT TO KNOW ABOUT THE TEAM'S 2020 SEASON

The Buccaneers, on the other hand, finished with a 7-9 record in 2019 behind quarterback Jameis Winston, who threw for a career-high 5,109 passing yards and 33 touchdowns. However, he managed to throw a league-high 30 interceptions, to go with five fumbles lost, which made the decision for head coach Bruce Arians to go after Brady an easy one.

One year later, Winston left Tampa Bay and signed with the Saints to back up Brees.

Once Brady signed with the Buccaneers, former teammate and star tight end Rob Gronkowski unretired, and was traded from the Patriots to Tampa Bay.

Add Gronkowski to the mix of weapons that includes wide receivers Mike Evans and Chris Godwin, and running back Leonard Fournette, who was signed by the team just last week after the Jacksonville Jaguars released him.

The Buccaneers have commanded most of the offseason headlines in the division, but the Saints will have something to say about that when the two division rivals square off in New Orleans on Sunday afternoon.