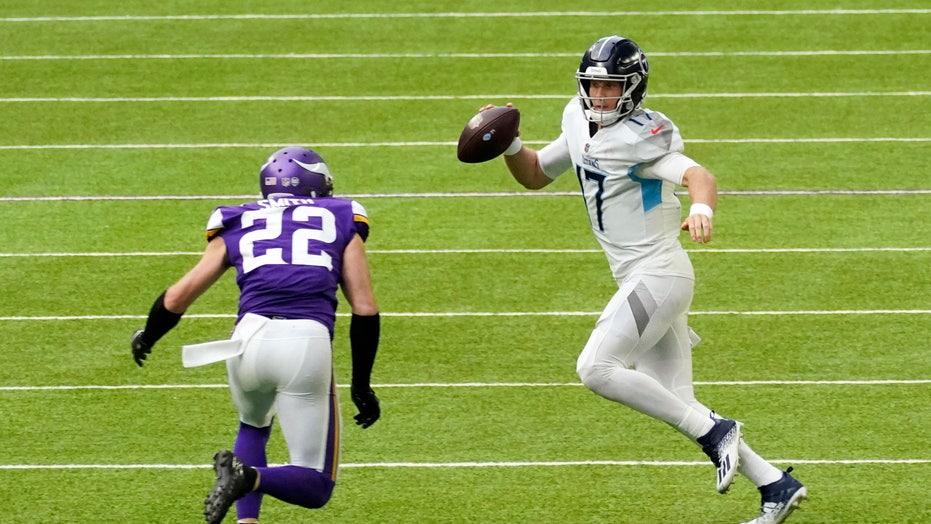 Ryan Tannehill and the Tennessee Titans have had little reason to sweat these tight finishes.

That shaky start with his new team now a distant memory, Stephen Gostkowski had this late-game part down a long time ago.

Gostkowski made his career-high sixth field goal of the game, a 55-yarder with 1:44 left that lifted undefeated Tennessee to a 31-30 victory over the Minnesota Vikings on Sunday after Tannehill directed another comeback.

“Every phase of our team has to improve and get better, but there’s no panic,” said coach Mike Vrabel, who took the Titans to the AFC championship game last season.

Derrick Henry rushed 26 times for 119 yards and two third-quarter touchdowns for the Titans, who improved to 3-0 for the first time since 2008 after trailing for a total of 32:07 in the game including a 12-point deficit until late in the third quarter.

Tannehill passed for 321 yards, guiding the Titans on a go-ahead drive in the fourth quarter or overtime for the sixth time in 16 games since becoming the starter. The Titans are 12-4 behind Tannehill, including the playoffs, and they're 15-0 when Henry — the NFL rushing leader last year — hits the 100-yard mark.

“We just kept chipping away chipping away, believing in each other,” said Tannehill, whose streak of nine straight games — the fourth-longest in NFL history — with two or more touchdown passes and one or fewer interceptions ended.

Tannehill, who was picked off in the end zone by Harrison Smith in the second quarter, hit Kalif Raymond three times for a career-high 118 yards and connected with seven different receivers in the absence of star A.J. Brown for the second straight game to a knee injury.

“There was no hesitation by anyone in the huddle, a lot of confidence we were going to get it done,” said Tannehill, the 2019 comeback player of the year.

Gostkowski, the four-time Pro Bowl pick and three-time Super Bowl champion with New England Patriots who signed with Tennessee just 10 days before the regular season began, missed three field goals in the 40 to 49-yard range and two extra points over his first two performances with the Titans. The 15-year veteran has three game-winning kicks with less than two minutes left in three games, though. The Titans have a net scoring margin of just six points.

“I had my back up against the wall, just kind of the emotions and feelings I never had before,” Gostkowski said. “To just keep my head down and grind and have some good results the last two weeks definitely means a lot.”

Dalvin Cook rushed for a career-high 181 yards and a score and rookie Justin Jefferson had seven catches for 175 yards and a touchdown for the Vikings, who are 0-3 for the first time since 2013, the year before coach Mike Zimmer was hired.

“We just came up a play or two short,” said Kirk Cousins, who threw for 251 yards and three scores.

Cousins hit Kyle Rudolph for a one-handed, toe-tapping grab in the back of the end zone for a 30-25 lead with 10:17 left, but the depleted Vikings defense didn't do enough to hold it. Tannehill and Henry helped move the Titans just close enough for Gostkowski, whose three second-half makes were all from 50-plus yards.

“The thing I have to figure out right now is to how to keep this team to understand what’s causing them to lose,” Zimmer said.

The Vikings, who were outscored 37-13 in the first half over their first two games, had 464 yards by an offense that finally got going. Cousins was hit late by Jeffery Simmons for a roughing-the-passer penalty that gave Minnesota the ball at its 40-yard line with 1:41 remaining, but the Titans toughened up after that. Amani Hooker picked off a desperation fourth-down heave by Cousins, who has already matched his 2019 interception total with six.

“The last possession, when you’ve got a chance to go down and win the game with a field goal, is a complete disaster,” Zimmer said.

During this NFL season that’s been drastically altered by the coronavirus outbreak, resilience might be even more of a vital ingredient in the recipe for success than usual and style points will be even more irrelevant. The Titans can surely attest.

Titans: LT Taylor Lewan hurt his shoulder late in the first quarter and did not return, replaced by Ty Sambrailo. ... LB Vic Beasley Jr. played sparingly in his Titans debut after missing the first two games with a knee injury.