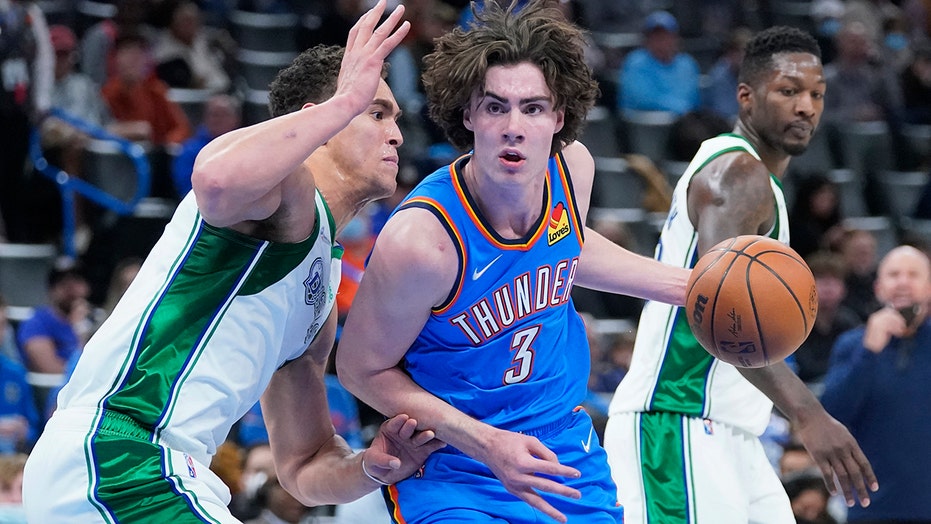 Luka Doncic had 14 points, 10 assists and nine rebounds in his return from a 10-game absence and Marquese Chriss came off the bench to score a season-high 15 points, leading the Dallas Mavericks to a 95-86 win over the Oklahoma City Thunder on Sunday night.

Doncic played with a long brace on his left knee and saw just over 31 minutes in his first game in 23 days. He was content with setting up teammates for baskets after missing five games with ankle soreness and five more games due to virus health and safety protocols.

"It was hard. The last time I did five-on-five was like four weeks ago," Doncic said. "Weird feeling, but I’m just really happy to be back. My chest was burning. I think slowly it’s going to come back. When I shot, the feeling was weird. I didn’t know if it was going to go in or out. There was one shot that feels amazing, I said ‘You shot it great and it’s going to go in,’ and it was an air ball."

The 10-game absence was the longest of Doncic’s career. Coach Jason Kidd thought his performance was solid.

"He almost had a triple-double in 30 minutes, so I think he did a great job. He’s still trying to get the feel," Kidd said. "He set the table for his teammates, he got his guys great shots, rebounded the ball for us. I just kept asking how was his wind and he said he felt great. It was good to see him out there."

Chriss, on his second 10-day contract after joining the Mavericks on Dec. 21, shot 6 of 9 from the field, including three 3-pointers, and had seven rebounds. He had played in just seven NBA games in the previous two seasons before signing with the Mavericks last month.

"I’d be lying if I said that it didn’t feel like there was any pressure," Chriss said. "But at the end of the day, I’m doing what I love and I get to be able to play basketball again. Truthfully, it’s been a really long year, just coming back from an injury. Being able to be back on the court, I’m just thankful for that. Just trying to make the most out of the opportunity that I can."

Kidd, who had 107 triple-doubles during his playing career, was impressed by Giddey’s performance.

"He’s unselfish. As a 19-year old, he understands how to play the game," Kidd said. "He’s comfortable with the ball, his teammates all know that if he has it, they’re gonna cut, because there’s a chance that they can get it. He’s comfortable shooting the 3. He has the total package. At 19, it’s just a matter of time of understanding how teams are going to play him. He’s as good as advertised."

Thunder: Shai Gilgeous-Alexander missed his second game this week, this time being placed in the health and safety protocols Saturday following his 23-point performance in a New Year’s Eve win over the Knicks. ... Only two officials were available for the game after crew chief Brent Barnaky was placed in the health and safety protocols earlier in the day. Veteran NBA ref Leon Wood and G League callup Dannica Mosher handled officiating duties.

Mavericks: Dallas won its third straight over the Thunder, cutting the all-time series advantage for the Thunder to 84-81