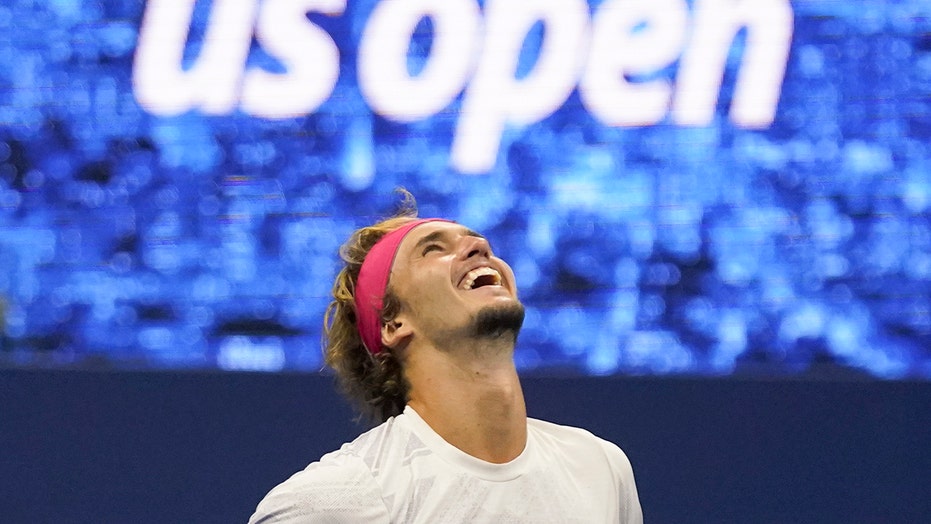 And perhaps he will Sunday, when both try to become a first-time Grand Slam champion, something men’s tennis hasn’t seen in six years, thanks largely to the dominance of Roger Federer, Rafael Nadal and Novak Djokovic.

What’s certain is that Zverev, as talented as he is, does not present the same kind of hurdle Thiem faced in his three previous title matches at major tournaments -- a pair of losses to 12-time French Open champion Nadal in Paris, and one to eight-time Australian Open champion Djokovic in Melbourne.

Doesn’t get any more difficult than those assignments.

“I won’t change my mindset at all. I know what Sascha is capable of,” Thiem said, referring to Zverev by his nickname.

“For me, it really doesn’t matter whether it’s him or one of the Big Three,” he said. “I’ll just try to go in there and give my best.”

It had been 16 years since Grand Slam semifinals were held without at least one of Federer, Nadal or Djokovic, who had combined to win the past 13 major trophies and 56 of the last 67.

Nadal chose not to try to defend his U.S. Open, citing concerns about international travel amid the coronavirus pandemic. Federer is out for the rest of 2020 after two operations on his right knee. And Djokovic’s tournament ended at 6-5 in the first set of his fourth-round match when the No. 1 seed and title favorite was disqualified for accidentally hitting a line judge in the throat with a ball after dropping a game in the first set.

So now there will be a Thiem vs. Zverev final between two members of the 20-something set long seen as capable of winning Grand Slam titles.

“It’s huge pressure for both of us,” Thiem said.

While Thiem reached his first major semifinal back in 2016 and has been knocking on the door since, this is relatively new territory for his opponent.

It wasn’t until this January that Zverev made it to his first Grand Slam final four at the Australian Open, losing to -- yes, that’s right -- Thiem, who is 7-2 against someone he calls “a very good friend and a great rival.”

That includes a 3-0 mark for Thiem at the majors and 3-1 edge on hard courts.

After putting together his first career comeback from a two-set deficit to win his U.S. Open semifinal 3-6, 2-6, 6-3, 6-4, 6-3 against No. 20 seed Pablo Carreño Busta on Friday, Zverev was asked about the importance of taking that step.

“There’s still one more step to go,” he said. “For me, I think it’s going to be extremely difficult.”

Thiem showed that he’s as mentally tough as he is fundamentally sound in his semifinal.

One key element Sunday should be Thiem’s resolute returning against Zverev’s superb serving.

Zverev regularly tops 135 mph and is averaging more than 19 aces per match, the most for anyone who played more than two matches in this U.S. Open. He’s won 86% of his service games.

Thiem, though, has won a tournament-best 40% of his return games. Medvedev entered their semifinal having lost just three service games through five matches -- and Thiem equaled that total by the second set Friday.

One more win will make Thiem an actual Slam champ. Another loss and he’ll become just the third man in the Open era to fall to 0-4 in major finals, joining Ivan Lendl and Andy Murray.

Lendl would go on to win eight Grand Slam titles; Murray has three.