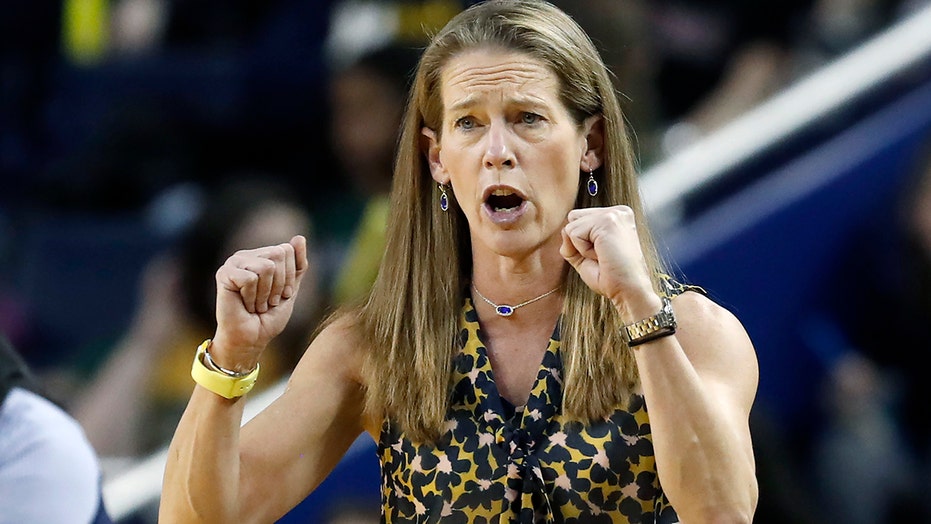 After Michigan lost to Ohio State in the semifinals of the women's Big Ten Tournament, coach Kim Barnes Arico and her staff immediately hit the road. They intended to take advantage of a full week off before the NCAA Tournament by making visiting as many potential recruits as possible.

“That was our window. You get to go to someone's home, that helps you build relationships. Helps build so many things,” Barnes Arico said. “We had all these things scheduled until we went to see high school championships.”

Those championships were canceled, of course. So was the NCAA Tournament, and just about everything else across sports because of the coronavirus. That includes the crucial recruiting period for college coaches who were putting the finishing touches on the 2020 class and laying the all-important groundwork for next year.

The NCAA has barred in-person recruiting until at least April 15. The Collegiate Commissioner's Association, which administers the letters of intent used by Division I and II athletes, followed with a suspension on all letters through the same date.

The result? No college coaches packed into suffocating high school gyms. No coaches milling around airport terminals, waiting for the next flight to some out-of-the-way place. No chance to shake hands with mom and dad and make a pitch that ultimately hold the fate of your career in their hands.

“March was watching high school games and going into homes. April and May had recruiting weekends. Home visits are all gone,” Barnes Arico said. “When the calendar comes back, June isn't a home-visit month. What will happen?”

It's a similar story for college football, baseball and a myriad other sports. There is a pervasive sense of uncertainty that has coaches on edge as they try to navigate recruiting amid a pandemic.

“I think recruiting is more of an inexact science right now than it ever has been,” Kansas coach Bill Self said. “Just knowing your own numbers and how to attack that — how can you commit to something now that you don't know what will exist, and the rules behind that existence? I think there's a lot of programs up in the air.”

The Jayhawks are one of them. Like most programs, they are largely done with their 2020 recruiting class. But they're also awaiting the decision of leading scorer Devon Dotson, who is expected to skip his final two seasons for the NBA, and that could potentially open up a late scholarship for Self and his staff to fill.

“What you do,” Self said, “is you recruit like you're going to have more scholarships when you don't end in the end.”

What does that recruiting look like, though? How do coaches that so value in-person visits, whether they happen on their own campus or in the homes of a prospect, build the same kind of relationships when face-to-face contact is impossible?

After all, there is only so much video that a coach can watch. So many text messages they can send.

Just like many businesses these days, technology is helping to fill the void. FaceTime and Zoom video conferences allow coaches to see athletes as they talk, and kids are increasingly posting workouts on YouTube for coaches to see.

Throw in the rapidly expanding transfer portal, where dozens of experienced college players are searching for new homes, and the recruiting landscape is more challenging and confusing than ever.

“It puts a premium on being really organized,” Connecticut coach Danny Hurley said. “We're just going to have to be a little creative in the way that we're able to present information to potential recruits, without the ability to get them on campus and without the ability to meet them for the foreseeable future. There's no blueprint for this one.”

For coaches who prefer a decidedly old-school approach to recruiting, such as Miami's Jim Larranaga, the loss of face-to-face opportunities is a difficult hurdle to overcome.

“I think social media has too much misinformation," Larranaga explained, “and I feel like one-on-one is better. I want to talk to a young man. I want to have a conversation. I don’t want to be posting, tweeting, Instagramming.”

Eventually, the coronavirus lock-downs will be lifted, travel will resume and life will return to some semblance of normal. High school athletes and college transfers will be allowed to visit campuses, coaches will be back to having dinner in their homes and the seemingly year-round recruiting grind will begin anew.

Or will it? Kentucky coach John Calipari isn't so sure. In fact, he hopes the disruption caused by the pandemic will help to reshape the recruiting calendar, leaving a lasting change that could benefit coaches and athletes alike.

“I’ve been saying since I was at UMass, ‘Eliminate summer recruiting,’ and everyone thought I was crazy,” Calipari said. "How about we spend time on our campus with our players? How about this thought? The coaches right now, like, have a normal life. We’re like, bored — cleaning garages. We’re reading books. We’re in the backyard breathing for the first time. We’re sleeping good at night. Why don’t we do this in the summer so we can have normal lives in what we do?

“We’re not taking three months off," he continued, "it’s just you’re on campus, you’ll have your own team, you’ll be with your own family. How about this? This is a crazy thought: Let’s take a two-week vacation where we can just go with your family, leave your phone at home. There’s things that I’m hoping come out of this.”