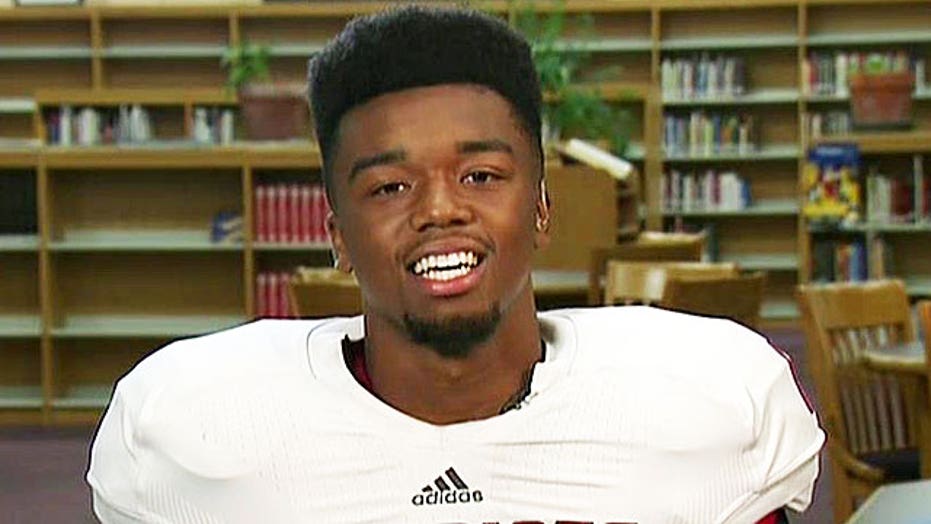 A Texas high school football player secured his place in the post-game interview hall of fame after delivering a motivational speech that would make even the crustiest coach's heart swell and eyes water.

Apollos Hester and the East View Patriots defeated the Vandegrift Vipers 42-41 on Friday and the senior’s infectious personality quickly showed during an interview with TWC News Austin.

"That's all it takes to be successful is an attitude. And that’s what our coach told us."

Nearly 4 million people had viewed Hester’s 2-minute video as of Tuesday and the school district’s athletic director told FoxNews.com that the performance might not even be the teen’s best.

“From what I understand, that wasn’t even his best speech — so I think that says a lot,” said Todd York, athletic director of the Georgetown Independent School District. “It was completely in character for him, it came natural. He just has this charisma about him and it came out at that time.”

Hester, listed at 6 feet tall and just under 200 pounds, plays football and basketball at East View High School in Georgetown and could be a scholarship athlete, York said.

“He’s the type of kid who could receive a scholarship for football,” he told FoxNews.com. “He’s a pretty good player on a good team, so he has that capability.”

York said Hester, who has posted other motivational videos on YouTube, is an example of how other students can learn from their experiences with positive role models.

“First of all, he’s a fabulous young man, but he's also obviously paid attention to what his coaches, teachers and parents have told him,” he said. “He’s been able to bring that out in a very emotional situation after that come-from-behind win.”

Hester, who could not be reached for comment Tuesday, appeared early Wednesday on Fox News Channel's "Fox & Friends."