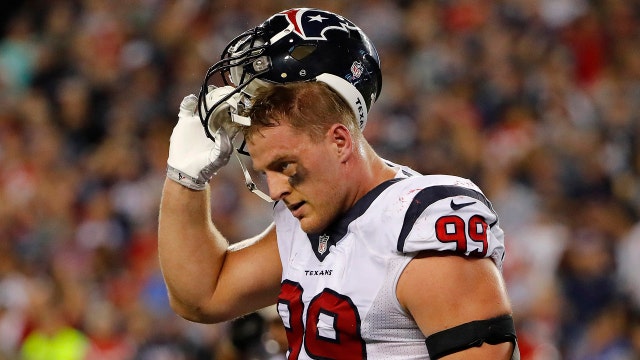 Houston Texans star J.J. Watt tweeted Saturday that kneeling during the national anthem is not about "disrespecting" the American flag or the military.

One person wrote, in a now-deleted tweet, that he was "pretty sure" the three-time Defensive Player of the Year would not be taking a knee, along with three American flag emojis.

Watt clapped back, responding Saturday: “Don’t speak for me”

"If you still think it's about disrespecting the flag or our military, you clearly haven't been listening," Watt tweeted.

On Friday, Texans coach Bill O’Brien said he would kneel with his players if they chose to do so during the anthem.

Watt has been outspoken about the need for more understanding and justice in the nation following the death of George Floyd while in police custody in Minneapolis on May 25.

Earlier this month, he wrote a lengthy post on social media that began: “Silence is unacceptable."

Last month, the defensive end said he is spending his free time in training in anticipation of the start of the NFL season amid the coronavirus pandemic.

“We don't know what's going to happen,” Watt said. “But I'm training like it's gonna happen on time. And, I'm looking forward to playing -- fans, no fans -- whatever it is. I'm just looking forward to competing and just doing what we do."

Watt said he believes the return of football is important, but not if it means lives are lost.

"We love the game. We love the competition as long as it's safe for everybody," Watt said. “You have to remember we have coaches who are older. We have people helping out on the sidelines and staff members.