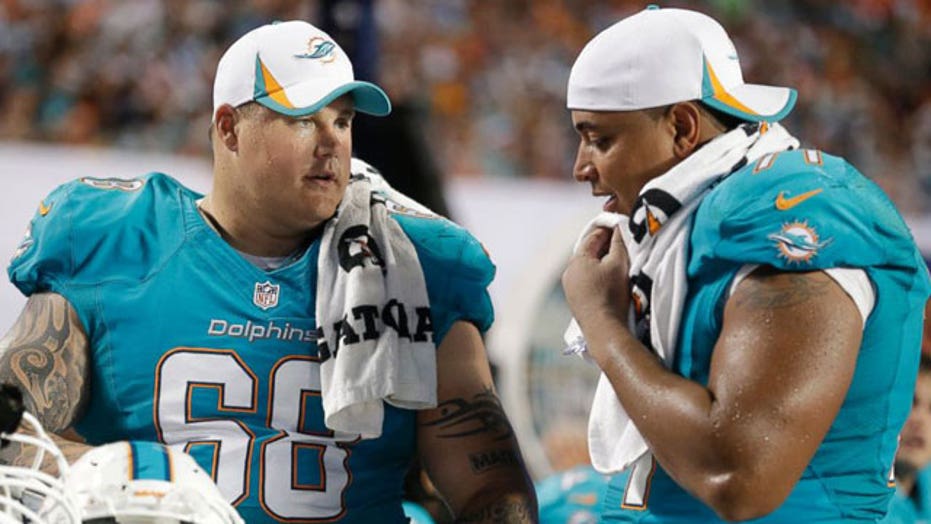 Richie Incognito is fighting back.

The Miami Dolphins offensive lineman who was suspended by his team for allegedly bullying teammate Jonathan Martin fully intends to return to pro football as a free agent in the 2014 season, people close to him tell Fox News.

What's more, Incognito has hired high-profile public relations firm Sitrick & Co. to mount a public defense and rebut allegations he bullied Martin, while his attorneys have turned over information to the National Football League that they believe shows Martin to be a troubled player both on and off the field, who at times made inflammatory and vulgar comments to Incognito.

The moves by Incognito come as the NFL's investigation of allegations that Martin was the target of bullying by Incognito and possibly other teammates has largely concluded, according to people with direct knowledge of the probe. High-profile attorney Theodore Wells, who is conducting the investigation, concluded the vast majority of his interviews with Dolphin players in late November, these people say.

Wells is expected to issue a final report sometime after Sunday’s Super Bowl, these people add. One issue that Wells is said to be grappling with is evidence turned over by lawyers for Incognito that they believe casts doubt on the allegation that Incognito harassed Martin. Rather, it suggests that both players were friends who engaged in crude locker room banter over a period of many months.

Incognito's attorneys also stressed that Martin came forward with the bullying charge in November of last year only after it appeared he might lose his starting job with the Miami Dolphins, and he abruptly left the team. That’s when he attempted to make the Dolphins locker-room appear to be a "hostile work environment" as grounds for a possible lawsuit, they said. Martin didn’t return for the rest of the season.

Incognito's attorneys argued to Wells that Martin’s mother is a prominent attorney with a background in labor law, and that before he left the team, Martin never said he was uncomfortable with the tone of his discussions with Incognito.

In a statement to Fox News, Incognito's attorney Mark Schamel of the law firm of Womble, Carlyle, Sandridge & Rice, said: "The coarse and unacceptable comments and text messages that were sent to Jonathan Martin were of the same poor taste as those sent by him. All of these communications were provided to Ted Wells and the NFL investigation. What they show is banter between friends, not bullying."

Martin’s attorney, David Cornwell, declined both email and telephone requests for comment. Martin’s spokeswoman, Ann Marchant, told Fox News that Wells and the NFL investigators have "the entire series of texts and it's more accurate to look at all of them," adding that to the extent Martin had made crude comments to Incognito, it was in the context of trying "to be a friend to Richie and to fit in" with the team.

She added that Incognito sent emails yet to be made public where Incognito "talks about gang raping (Martin's) mother and sister. They are very vile."

Marchant said Martin has no plans to file a lawsuit in the matter, but does intend on returning to the NFL in the 2014 season, though not with the Miami Dolphins, which she described as a “toxic environment.” Martin remains on the Miami Dolphins roster; owner Stephen Ross has indicated that neither Martin nor Incognito will return to the team.

Press officials for the NFL, the Miami Dolphins and Wells declined to comment.

Martin has spoken out just once about the matter, in a recent interview with NBC in which he said he felt "trapped" by the locker room bullying. Incognito, for his part, has given one interview with Fox Sports' Jay Glazer, in which Incognito conceded using racially charged language in the voicemail left with Martin, but described it as banter between friends.

His lawyer’s comments to Fox News add new light to the controversy which began last November, when Martin abruptly walked out amid charges of bullying on the team. Martin is said to have taken particular aim at Incognito, who was considered one of his closest friends.

In one voicemail message that was made public, Incognito called Martin a "half n----- piece of s---," and telling Martin that "I want to kill you." Incognito’s attorneys have argued to Wells that the message was taken out of context, since the rest of the voicemail shows the two speaking as friends.

That said, the episode cast a harsh light on NFL locker room culture, especially when details emerged that Incognito allegedly took it upon himself to toughen up Martin, who joined the team as a rookie in 2012. Incognito is an eight-year veteran who made the Pro Bowl in 2012 and is considered one of the league’s best and most aggressive offensive linemen.

Soon after details of the alleged bullying surfaced, Incognito was suspended by the Dolphins; he is officially an unrestricted free agent for the 2014 season, though the controversy has placed a cloud over his career, with many in the sports world questioning whether he will return.

More recently, Incognito, through his attorneys, has been pressing a case with Wells that while he may have made outrageous and at times racially charged comments, Martin wasn’t an aggrieved party; in fact, they say he was a willing participant in what has been described as dirty locker room talk between two friends.

In fact, they've provided Wells with one text dated Nov. 1, 2013 in which Martin says about the controversy: "It's insane bro but just know I don’t blame you guys at all it's just the culture around football and the locker room got to me a little."

People close to Incognito say his lawyers handed Wells hundreds of text-message conversations between the two players. In one such conversation, dated Dec. 17, 2012, Martin told Incognito that “Ima egg your house & light a bag of s--- on fire then ring your doorbell.”

Martin shot back: "Im gonna give McDonald bath salts & lock him in your house with a tranquilizer gun & a box of sand paper condoms."

In a series of interviews with Wells, Incognito's lawyers also described Martin as a troubled young man, someone who missed team meetings and had difficulty keeping up with the rigors of daily life in the NFL, particularly in 2013, when he was worried he would lose his starting job. They pointed Wells to text messages where they described Martin telling Incognito that he had sought mental-health counseling to deal with intense anxiety.

The text messages also provide indications of Martin’s alleged possible drug use, Incognito’s lawyers have asserted. In one, dated June 15, 2013, Incognito asked Martin, "Hahaha What did u do last night."

In another set of texts, dated Aug. 31, 2013, Incognito asks Martin to join him and two female companions for "dinner and drinks," but Martin demurred stating, "My friend Mary Jane has me glued to the couch."

"F---ing stoner," Incognito shot back (the term "Mary Jane" is a common short-hand for marijuana).

In a statement to Fox, Schamel said "Jonathan Martin also raised concerns with Richie Incognito that he was not playing well, about how upset he was at being ranked by Pro Football Focus as among the worst lineman in the NFL, about his poor performance on the field, his demotion to right tackle and how he was concerned about what the outcome might be for his missing team meetings and about how he felt his job was at risk."

He added: "It was only after sharing these concerns, and Martin's abandonment of the team, that the bullying allegations were raised. Rather than deal with his poor on field performance and myriad other issues, Martin is now hiding behind false allegations."