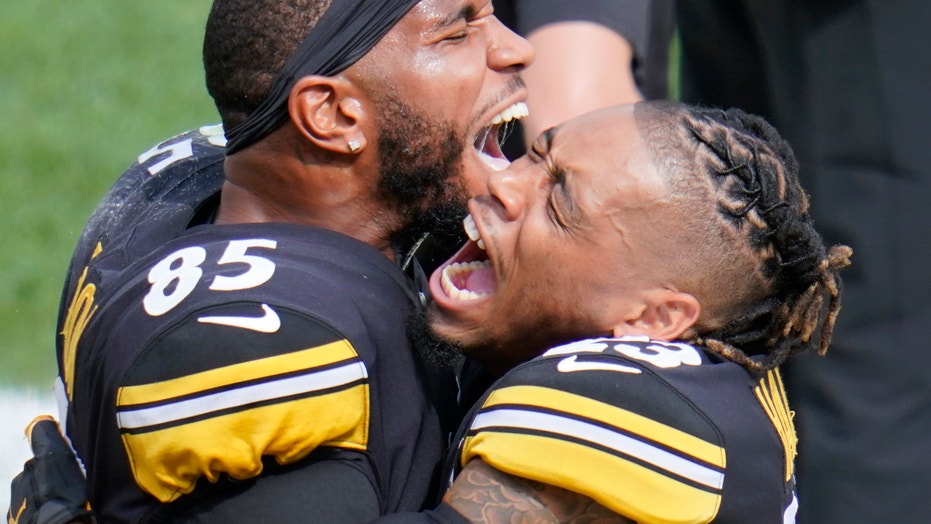 The Pittsburgh Steelers spent two quarters trying to hem in Deshaun Watson. It didn't take. After watching the Houston quarterback move the Texans up and down Heinz Field with remarkable ease, the Steelers blew up their meticulously put-together game plan and went back to their default setting: attack.

Might want to stick with that one. Probably for good.

Slicing into the backfield relentlessly, the Steelers put the clamps on the Texans in the second half to rally for a 28-21 victory that pushed them to 3-0 for the first time in a decade. Houston managed just 51 yards and two first downs over in the final 30 minutes to fall to 0-3.

Houston's defense wilted late, giving up a 12-play, 79-yard touchdown drive following a pick by Watson, one that ended with James Conner's 12-yard sprint that put the Steelers up 28-21 with 6:24 to go. Pittsburgh forced its third three-and-out of the second half on Houston's next possession and the Steelers then ran off the final 4:47 that began with a 25-yard dash by Conner and ended with three anticlimatic knee downs inside the Houston 10.

“You’re not going to win football doing what we do in the fourth quarter these last two weeks, giving up all of these runs,” said Texans defensive end J.J. Watt, whose team let the Ravens push them around late in a lopsided loss in Week 2.

Conner finished with 109 yards rushing and added 40 yards receiving. He had plenty of help from rookie Anthony McFarland, who ran for 42 yards on six carries in his NFL debut and Benny Snell Jr., who converted a key third-and-1 on the go-ahead touchdown drive. After opening the season with two relatively drama-free wins, the Steelers needed to overcome an early 11-point deficit to stay perfect.

“We’re a four-quarter team," Conner said. "Our defense allowed us to get back in it and ... (if) you get us back on offense, we’re going to get it going sooner or later.”

DEJA VU ALL OVER AGAIN?

Houston opened 0-3 in 2018 and rallied to win the AFC South. The going might be tougher this season if the defense can't find a way to hold up over 60 minutes. Then again, the schedule hasn't exactly been user friendly either considering Houston opened with road trips to Kansas City and Pittsburgh sandwiched around a home visit by the reigning Super Bowl champions.

“We’ve got 13 more games,” said Watson, who finished 19 of 27 for 264 yards with two touchdowns and the interceptions. "So it’s a lot of opportunities out there. We've got to keep building and keep pushing forward.”

Pittsburgh's Ben Roethlisberger threw for 237 yards and two touchdowns in his franchise-record 221st appearance, breaking the record set by Hall of Fame center Mike Webster. The 38-year-old even paid tribute to Webster by throwing a block on Houston linebacker Jacob Martin on wide receiver Diontae Johnson's 9-yard reverse in the second quarter.

Roethlisberger gave the credit for his longevity to the men who have protected him throughout the years and stressed he doesn't believe he's eclipsed Webster.

“He’s ‘Iron Mike’ for a reason,” Roethlisberger said. "They’re never going to call me ‘Iron Ben,’ I get that. ... It’s not like I passed him, I feel like I joined him today.”

Middle brother Derek, a fullback for the Steelers, watched from the sidelines and spent most of the afternoon there. Derek played occasionally in the first half before leaving with a hamstring injury.

T.J. Watt earned family bragging rights, picking up a key sack on Watson to push back the Texans at the start of their final possession. Watt's sack was the fifth by the Steelers on the afternoon, extending their streak of games with at least one sack to 60, fourth-longest in NFL history.

“I know this really is a once in a lifetime thing,” T.J. Watt said.

One J.J. doesn't plan to savor until his team figures things out.

“Someday we’ll look back on it and it will be pretty cool,” J.J. Watt said. “But right now, sitting at 0-3 it doesn’t feel that great.”

Texans: S A.J. Moore left with a hamstring injury in the first half and did not return.

Steelers: Johnson exited in the second quarter due to a concussion on the play where Roethlisberger helped pave the way for a short gain.

Texans: Host Minnesota next Sunday looking to avoid their first 0-4 start since 2008.