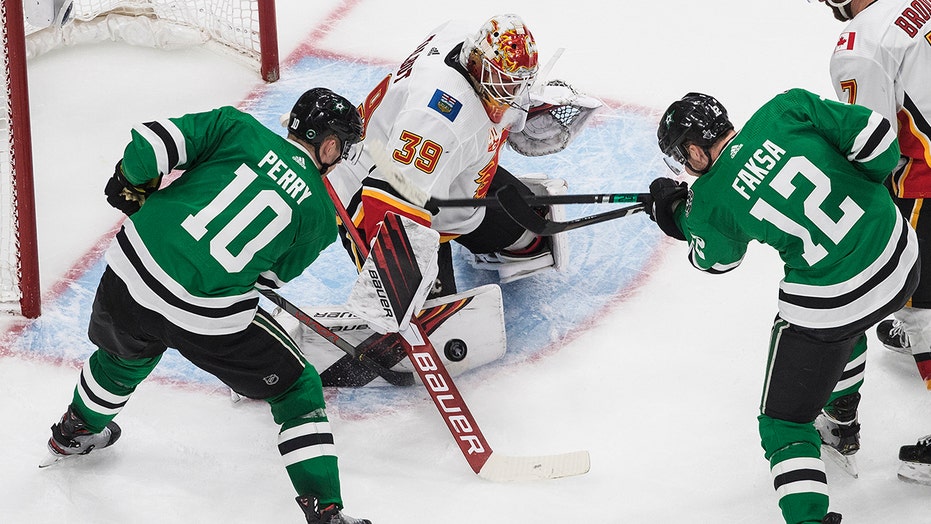 Miro Heiskanen set the tone early for the Stars when on the ice with their top line. Corey Perry and Jamie Oleksiak made sure Dallas got a series-evening win without needing overtime.

Oleksiak scored with 40 seconds left in regulation on a nifty pass from Perry as the Stars caught the Calgary Flames on a line change, and won 5-4 Thursday night after blowing a two-goal lead in the third period.

“Saw a little opening on the weak side, Perry coming down the wing. He made a great pass," Oleksiak said. “Somehow get it in, it was close. ... It was a great feeling, a great play by Perry."

Perry also scored on a power play for the Stars, who evened the series at a game each. Game 3 is Friday night.

Calgary got a short-hander from Tobias Rieder with 7:36 left, and then tied the game on Sam Bennett's power play goal with 2:49 left after Alexander Radulov got an interference penalty in the offensive zone when trying to batting for position.

"I don't think we panicked at all when they scored that fourth goal," said John Klingberg, who had two assists. “I think we dictated most of the game tonight, and it’s a huge win for us and our team."

Heiskanen scored two goals while on the ice with Jamie Benn, Tyler Seguin and Radulov, responding after Dillon Dube put the Flames ahead with a goal just 19 seconds into the game,

The Stars tied the game less than 2 1/2 minutes later, when Benn took a hard shot from just inside the blue line that goalie Cam Talbot couldn't handle in traffic. Radulov then made a backhand spin, with the puck ricocheting over the lower leg of Derek Forbort and past the goalie.

Radulov assisted on the go-ahead goal midway through the first period when he beat Calgary captain Mark Giordano for the puck along the board, and pushed it ahead to Heiskanen for a backhander from just inside the left circle.

Heiskanen made it 3-1 about five minutes into the second period with a backhand knuckler off the board that slipped through the small gap between Talbot's right arm and the post.

“Same thing we see out of him every game. It’s something we kind of get used to,” goalie Ben Bishop said of Heiskanen's play. “It’s good to get him on the public stage here so everybody can see how good of a defenseman he is. ... This is Miro to a `t'. He shows up every single night and he gives the same effort, and it was nice to see him get rewarded.”

Bishop stopped 22 of 26 shots for the third-seeded Stars after not playing in their last two round-robin games or the series opener against Calgary.

The Flames appeared to have gotten within a goal again about five minutes into the third period but officials ruled after a replay review that Andrew Mangiapane had kicked the puck into the net. That came at the same time that Seguin took a double-minor penalty for a high stick.

“The way I saw it, he was falling backward,” Ward said.

“It looked like he was getting pulled down or falling," Giordano said. “The good thing is, I like the way our team responded. We didn’t let that affect us. We went out and still got the tie-er. Yeah, those things are out of our control. We thought it was good. They thought it wasn’t."

Calgary got only two shots during the ensuing four minutes with a man advantage, before the short-hander and power play goal after that.

Forbort's wrister from inside the blue line in the second period got Calgary within 3-2, but the Stars restored their two-goal lead about two minutes later on Perry's power play goal.

Dube, who scored twice in the first period of the Flames' 3-2 win in Game 1, quickly put them ahead when the puck ricocheted off the end board and through traffic right in front to the 22-year-old center.

NOTES: Flames LW Matthew Tkachuk seemed out of sorts when he skated off the ice and then left the bench early in the third period. He banged heads with both Benn and Oleksiak after getting caught in a collision between the two. Tkachuk didn't return, but Ward had no update after the game. ... Heiskanen entered the game as the Stars with a team-hive points (five assists) in the first four postseason games.

Game 3 is set for Friday.