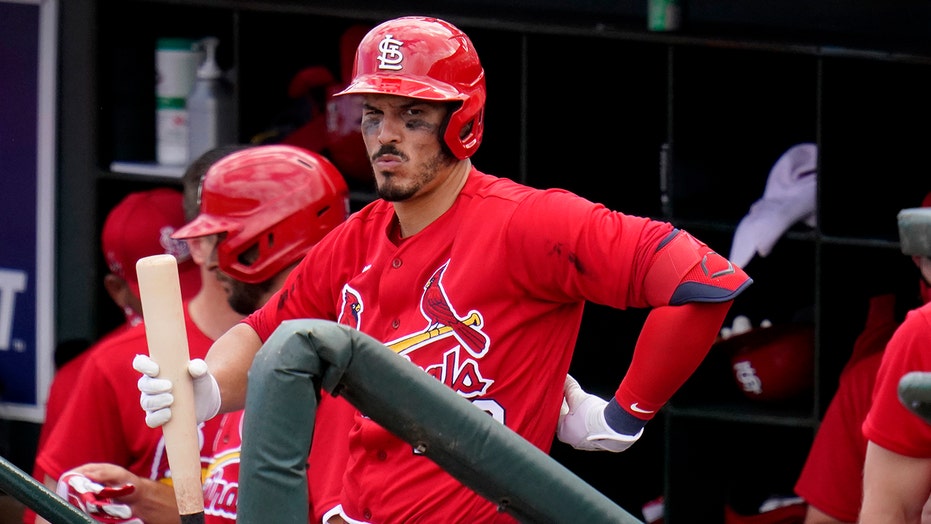 Nolan Arenado in his new Cardinal red, Mookie Betts back in Dodger blue. October breakout star Randy Arozarena with a hit in his first February at-bat, Buster Posey returning from an opt-out year.

And a socially distanced standing ovation for Trey Mancini.

All over spring training, baseball enjoyed a bevy of reassuring signs Sunday on the opening day of Grapefruit and Cactus league play.

Including people in the seats, albeit in numbers limited by COVID-19 protocols.

The Toronto-Yankees game at Steinbrenner Field in Tampa, Florida, drew 2,637, close to its permitted maximum of 2,800 in a park that holds over 10,000. A little farther south in Bradenton, the Baltimore-Pittsburgh opener crowd of 1,705 was officially listed as a sellout.

"I’m glad we got some of the fans back," Yankees slugger Luke Voit said.

Many top names were in play, too.

Jazz Chisholm of the Marlins and Adam Haseley of the Phillies did even better — they led off games with home runs.

Say, what’s all this talk about a deadened ball?

A change easily noticeable: shortened games. Major League Baseball is letting teams cut these early exhibitions down to five innings if they want, coming after a season in which the coronavirus forced clubs to alter workouts and play only 60 times.

The Chicago White Sox and Milwaukee stopped after six innings in Arizona. The only Florida game to go nine was Washington-St. Louis, and tied 4-all.

Around the diamonds, Marcus Semien, Andrew Benintendi and Elvis Andrus made their exhibition debuts for new teams and Todd Frazier homered for Pittsburgh.

Not many aces on the mound on the first day — Jack Flaherty, Nathan Eovaldi and Iván Nova were among the familiar names limbering up, and they each got tagged.

By far, the most touching scene involved Mancini.

After producing 35 home runs and 97 RBIs for the Orioles in 2019, he seemed primed for even bigger things. But after playing just five exhibitions last year, he needed to end his season to have surgery for colon cancer.

When Mancini came up in the first inning against Pittsburgh, he drew a nice round of applause as he approached the batter’s box and waved to the crowd. The cheers kept growing, with pitcher Chad Kuhl stepping off the mound and umpire Will Little cleaning the plate to prolong the salute.

Mancini took off his helmet to acknowledge a standing ovation that included the fans, the Orioles and the Pirates.

Moments later, the slugging first baseman, who turns 29 in a few weeks, lined a single to center field.

"It’s almost a year to the day when I was last in a game, so it definitely felt like a moment where we came full circle a little bit," he said. "I thought more about everything that happened today than I have in a long time. I’ve mostly tried to in a lot of ways just move on and not think too much about last year. But today I ran through all the tough days that we had and really tried to appreciate and cherish today."

FROM AROUND THE GRAPEFRUIT AND CACTUS LEAGUES

Prized prospects Julio Rodriguez and Jarred Kelenic combined to deliver the winning run in the bottom of the ninth inning a week after disrespectful comments from CEO Kevin Mather regarding both players became public. Mather has since resigned. Rodriguez and Kelenic offered a look at Seattle’s future when Kelenic walked and scored on Rodriguez’s two-out single.

Marco Gonzales made his first spring start for Seattle, allowing two hits and an unearned run in two innings. Kyle Seager and Dylan Moore had RBI singles, while Evan White doubled in a pair. Mitch Haniger was in the lineup for Seattle for the first time since June 6, 2019, following a series of surgeries after he ruptured a testicle from a foul ball. Haniger singled in two trips, scoring a run.

Arenado was hitless in two trips, striking out with two runners on in the first inning and flying out to center in the third. Flaherty surrendered three runs, four hits and three walks in an inning-plus of work.

Kyle Schwarber singled in two at-bats and scored a run in his first game with Washington. Erick Fedde, in line for the final spot in the starting rotation, loaded the bases in the first inning and gave up a run on a wild pitch to Arenado.

Baltimore's Chris Davis was hitless in two trips with a strikeout. Davis, in the sixth year of his $161 million, seven-year deal, has changed his mechanics in an effort to resurrect his career after batting .115 in 16 games of an injury-plagued 2020 season. Hall of Famer Cal Ripken Jr.'s son Ryan struck out in his only at-bat.

Kuhl allowed two hits but struck out the side in a one-inning start for Pittsburgh. Gregory Polanco had a two-run shot, and Ke'Bryan Hayes doubled in a run and scored. Kevin Newman had two singles and walked, scoring twice.

Rowdy Tellez had a two-run, ground-rule double, Cavan Biggio doubled in a run and Jonathan Davis and Lourdes Gurriel Jr. added RBI singles as Toronto scored runs in each of the first four innings of a game called after seven innings.

LeMahieu, who signed a six-year $90 million deal to stay with New York in the offseason, had a single in two trips. Gleyber Torres doubled.

Max Kepler had a two-run single, Miguel Sano added a two-run double and Minnesota scored five runs in the second inning of a game called after seven.

Eovaldi started for Boston and was tagged for two runs on two hits and a walk while retiring four batters. Bobby Dalbec had a solo home run in two trips. Top prospect Jeter Downs had a two-run home run and RBI single, while Michael Chavis hit a solo shot.

Austin Meadows and Mike Brosseau homered for the reigning AL champs, and Manuel Margot added an RBI double during a four-run second inning against Atlanta's Kyle Wright. Wander Franco, MLB's No. 1 prospect, was hitless in two trips after replacing Arozarena.

Wright, hoping to nail down the final spot in the Braves' rotation, allowed three runs, four hits and a walk while retiring four batters. Dansby Swanson had an RBI single.

Nova allowed five runs, three hits and two walks while retiring just one batter. Willi Castro led off Detroit's five-run first with a homer, and Jeimer Candelario doubled for one of his two hits.

Haseley's homer was one of four hits for Philadelphia, including a double by Mickey Moniak.

Chisholm's homer got Miami going, Garrett Cooper doubled in a run and Lewis Brinson hit a two-run shot as the Marlins scored four times in the first.

Myles Straw, expected to take over in center field after Houston mainstay George Springer signed with Toronto in the offseason, had a pair of singles from the leadoff spot in two trips.

Seager had an RBI single in two trips for the Dodgers, and newcomer Matt Davidson doubled in the go-ahead run.

Seth Brown singled in the only run for Oakland, which managed just two hits. Andrus walked and was caught stealing in his first game with the A's.

Posey walked and singled, scoring a run for San Francisco. Wilmer Flores had an RBI double.

Keston Hiura hit the first of Milwaukee's four homers, a three-run shot in the first. Avisail Garcia added a solo homer and scored twice. Eric Lauer, in the hunt for a spot in the back of the rotation, gave up two runs in an inning of work.

Andres Gimenez, who along with fellow shortstop Amed Rosario came to Cleveland in the Francisco Lindor trade with the Mets, tripled in a run in his first at-bat with the Indians. He added a single and finished 2 for 2. Cal Quantrill, in the hunt for a rotation spot, pitched two scoreless innings, allowing a hit and a walk.

Kyle Farmer doubled and scored on Votto's single for Cincinnati. Votto had two of the Reds’ four hits.

Austin Gomber, who came to Colorado in the Nolan Arenado trade with St. Louis, was sharp in his spring debut. The 27-year-old left-hander allowed one hit in two shutout innings. Garrett Hampson and Eric Stamets had RBI singles. Josh Fuentes, in a battle with C.J. Cron and Greg Bird for the starting job at first base, went 2 for 2, scoring a run.

Newcomer Ervin Santana, hoping to earn a spot in the Kansas City rotation, allowed two runs on a hit and a walk, pitching two innings. Former Royals closer Wade Davis, back with the team for the first time since 2016, allowed one hit in two scoreless innings. Salvador Perez had two hits, including a solo home run. Ryan O’Hearn added a solo shot.

Joey Gallo had a two-run home run for Texas, connecting off Santana in the first inning.