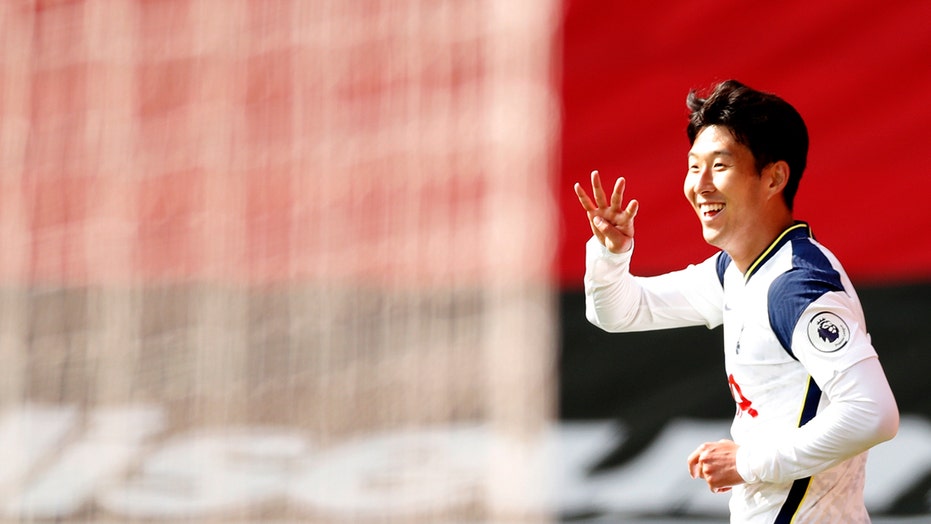 No fans but no shortage of goals.

There were 18 goals in the Premier League's four games on Sunday — with Tottenham's 5-2 victory over Southampton producing the most.

Heung-min Son was rampant, scoring four in a league game for a first time — all assisted by Harry Kane, who got Tottenham's fifth.

Neal Maupay was also on target twice as Brighton won 3-0 at Newcastle. And there were six different scorers as Leicester beat Burnley 4-2.

A tepid game at Stamford Bridge swung in Liverpool’s favor when Christensen hauled down Mane in first-half stoppage time.

As the champions pressed immediately after the break, Mane took five minutes to head in the opener after an interchange between Roberto Firmino and Mohamed Salah.

Yet another blunder by Kepa Arrizabalaga gifted Liverpool a second. The Chelsea goalkeeper stopped Fikayo Tomori’s back pass before trying to clear to Jorginho. But it was easily intercepted by Mane to slot into the net.

Chelsea did gain a unexpected chance to stage a comeback when Thiago Alcantara on his Liverpool debut brought down Timo Werner but Jorginho’s penalty was saved by Alisson.

But first Jose Mourinho's side had to recover from Danny Ings meeting a high ball from Kyle Walker-Peters to put Southampton in front in the 32nd minute.

But Tanguy Ndombele released Kane, who squared for Son to equalize at the far post in first-half stoppage time.

Two minutes into the second half, Kane played in Son again as Tottenham went in front. The South Korean secured his first Premier League hat trick in the 64th minute after being set up by Kane’s lofted pass.

Kane became the first player to set up a Premier League teammate for four goals, crossing for Son to chip goalkeeper Alex McCarthy.

When Erik Lamela's shot was turned onto the post, Kane was primed to net for himself.

There was still time for a slightly frustrating end for Tottenham when Matt Doherty was adjudged to have handled in the box and Ings netted from the penalty spot in the 90th.

For the first time since the 2015-16 season, Leicester has opened with two wins. That campaign ended with Leicester's shock surge to the title.

Just qualifying for Europe would suit Leicester fine this time, after being denied Champions League qualification on the final day of the last season in July.

Although Chris Wood put Burnley in front in the 10th minute, Harvey Barnes leveled 10 minutes later and Erik Pieters’ own-goal put Leicester ahead five minutes into the second half. James Justin extended the lead in the 61st.

Although Jimmy Dunne pulled a goal back, Dennis Praet’s powerful shot in the 79th made sure of the win.

After opening with a loss to Chelsea, Brighton was quick off the mark to secure the win over Newcastle.

Maupay scored twice in the opening seven minutes, the first from a penalty after Allan Saint-Maximin’s challenge on Tariq Lamptey.

Aaron Connolly wrapped up the victory in the 83rd. Brighton had Yves Bissouma sent off for catching Jamal Lewis in the face with his studs in the 89th.