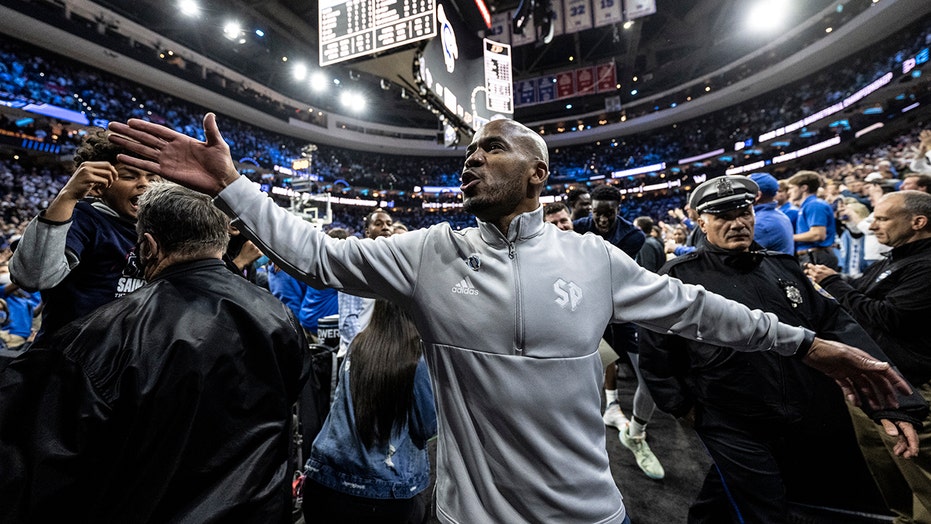 The Saint Peter’s Peacocks became the first No. 15 seed in NCAA tournament history to reach the Elite Eight after a stunning 67-64 win over third-seeded Purdue Friday night. Behind their run is a coach whose history as a gritty college player is helping this small New Jersey school reach improbable heights.

A native New Yorker, Shaheen Holloway has always remained loyal to his roots. Born in Queens, Holloway played high school basketball just over the river in Elizabeth, New Jersey, at St. Patrick's, where he became regarded as one of the top prospects in the nation.

Head coach Shaheen Holloway of the St. Peter's Peacocks during a television interview after beating the Purdue Boilermakers during the Sweet 16 of the 2022 NCAA men's basketball tournament at Wells Fargo Center in Philadelphia March 25, 2022.  (Ben Solomon/NCAA Photos via Getty Images)

After turning down offers to play at powerhouses like Duke and Georgia Tech, Holloway attended Seton Hall in New Jersey, where he played a pivotal role in ending a Pirates’ NCAA Tournament drought and became one of the program’s all-time greats.

Holloway returned to New York to start his coaching career, making a name for himself at Iona College, his alma mater and, eventually, Saint Peter’s.

"That's who I am," Holloway told ESPN in an interview this week. "That's me as a person. When someone is loyal to me, the loyalty is [given] right back. I'm the type of person who wanted to go for challenges."

Shaheen Holloway, a 5-foot-10 point guard from St. Patrick High School in Elizabeth, N.J., in action during the McDonald's All-American high school basketball game at the Civic Arena in Pittsburgh.

In high school, Holloway played alongside NBA greats in the 1996 McDonald's All-Star Game, including the legendary Kobe Bryant, Stephen Jackson and Richard Hamilton. Holloway was named the game's MVP after finishing with seven points, eight assists and six steals.

Holloway spoke highly of that 1996 team in an interview with NJ.com in 2020, recalling Kobe’s reaction to being snubbed for MVP.

"He was a competitor, he had that competitive spirit," Holloway said of Bryant. "You’ve got to realize, the team that we had at the McDonald’s game in the east, there were so many big-time level guys. He took everything personal all the time, like he always wanted to be the best."

Shaheen Holloway of the Seton Hall Pirates is grabbed by teammates during an NCAA Tournament first-round game against the Oregon Ducks at the HSBC Arena in Buffalo. The Pirates defeated the Ducks 72-71 in overtime.  (Getty Images)

Holloway had an immediate impact on the court as a freshman at Seton Hall, averaging 17.3 points, 6.3 assists, 2.8 steals and 3.8 rebounds per game and was named to the Big East All-Rookie team. He helped his team reach the Sweet 16 in 2000 before an injury ended his collegiate career. He finished his four years as the Pirates’ all-time assist leader with 681. He also scored 1,588 career points, the 17th highest total in program history.

Holloway was a two-time All-Big East second-team selection and was named Big East Most Improved Player his senior year. He was inducted into the Seton Hall Athletics Hall of Fame in June 2012.

Head coach Shaheen Holloway of the St. Peter's Peacocks after beating the Purdue Boilermakers in the Sweet 16 of the 2022 NCAA men's basketball tournament at Wells Fargo Center in Philadelphia March 25, 2022. (Ben Solomon/NCAA Photos via Getty Images)

After a professional career overseas, Holloway returned to Seton Hall in 2006 as an administrative assistant before joining the Iona Gaels, where he served as an assistant coach under Kevin Willard for three seasons, helping turn around a 2-28 team into a 21-10 powerhouse.

Holloway followed Willard to Seton Hall as an assistant coach in 2010 and eventually an associate head coach for eight seasons. During his time there, the Pirates recorded three straight 20-win seasons for the first time since 1991-93 and NCAA Tournament appearances in three consecutive seasons for the first time since four straight appearances between 1991 and 1994.

In 2018, Holloway took the head coaching position at Saint Peter’s. He was named the 2020 MAAC Coach of the Year in his second season. This year, he led the Peacocks to their first 20-win season since 2016 and is in the midst of the program's best-ever NCAA Tournament run.

"The tough kid from Queens who got hurt in the NCAA tournament and couldn't play — couldn't finish out his career — now gets the chance to coach a tough, gritty team that’s become the darling of the country, and so we literally have — I wouldn’t say David vs. Goliath — but Shaheen vs. Goliath this weekend."

The Peacocks will look to continue their Cinderella run with a win over the No. 8-seeded Tar Heels Sunday night.