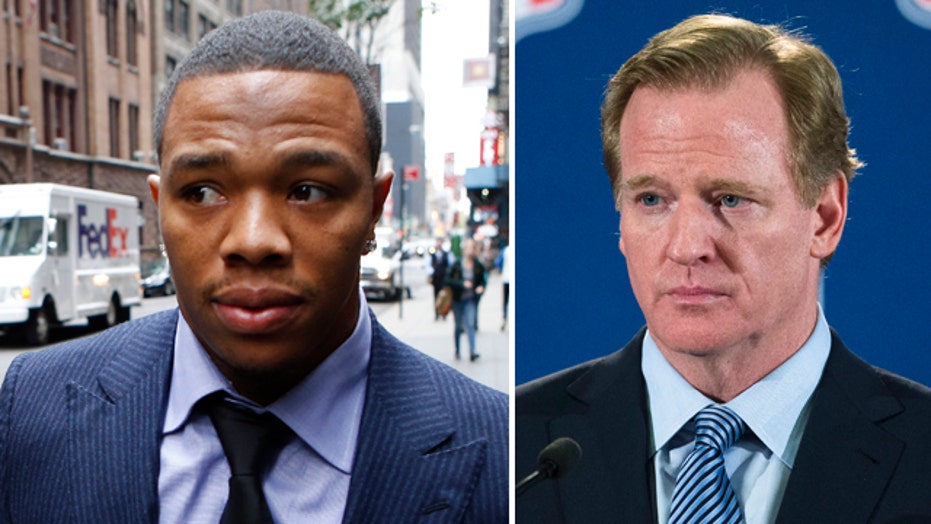 Former Baltimore Ravens running back Ray Rice and his wife reportedly arrived in New York on Thursday for the second day of testimony in his appeal hearing.

Rice, 27, and his wife, Janay, arrived together in midtown Manhattan early Thursday. They and Baltimore Ravens general manager Ozzie Newsome were expected to be among witnesses at the offices of former U.S. District Judge Barbara S. Jones in New York, a source with knowledge of the hearing told USA TODAY Sports. Rice and his wife were expected to testify separately.

Rice spent nearly 10 hours at the hearing, which took place nearly two months after the former Pro Bowl running back was suspended indefinitely by the NFL and released by the Baltimore Ravens.

League security chief Jeffery Miller and Ravens President Dick Cass are among the key witnesses expected to testify in the two-day hearing.

Rice was suspended indefinitely Sept. 8 for violating the NFL's personal conduct policy after a video of him hitting his then-fiancee was released publicly.

Rice is seeking immediate reinstatement, though it's unlikely a team would sign him this season. Rice has also filed a separate wrongful termination grievance against the Ravens.

It's uncertain how long Jones will take to make a decision, but she's not expected to make it on Thursday, one source told The Associated Press.

Goodell originally suspended the running back for two games. The incident occurred inside an elevator at an Atlantic City casino in February. The couple married a month later.

The league considered the video made public after the initial suspension to be new evidence, giving Goodell the authority to amend Rice's punishment. But Rice's attorneys are arguing he should not be disciplined twice, citing the collective bargaining agreement.

Rice's side also is arguing that he described details of the incident to Goodell when they met in June. Goodell has called Rice's description "ambiguous" while the player's representatives have maintained he gave exact details.

Jones was jointly picked by the commissioner and the players' union to hear the appeal. Though it isn't a criminal case, Jones ruled witness will testify under oath. Transcripts of the testimony will not be released publicly, the source said.

Rice, a three-time Pro Bowl pick, played in two preseason games for the Ravens this year. His last carry was a 6-yard run against San Francisco on Aug. 7.