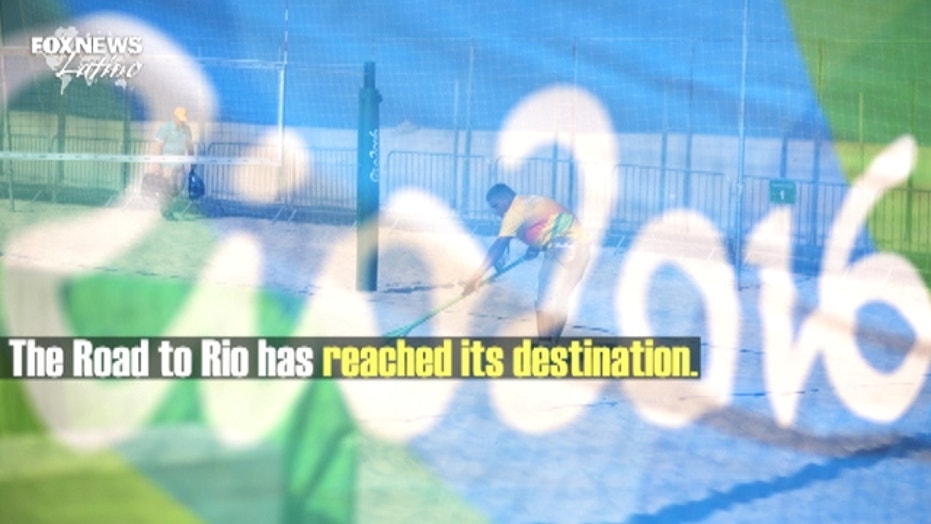 Here are 17 Latino athletes representing the United States at the Rio Olympics. Let the Games begin!

The Road to Rio has reached its destination.

Team USA is pumped and ready to represent the Red, White and Blue once again.

The United States is sending 554 athletes and among those are 17 Latino rookies and veterans hoping to make their mark at the 2016 Summer Olympics.

Meet Brenda Martinez. The inspiring story of how she reached Rio is one for the record books. At the U.S. Olympic trials, she tripped in the 800 meters and was under the gun to qualify in her last race, the 1,500 meters. She made it by 0.03 of a second. Before the race, she told reporters, “The track doesn’t care about your feelings. You’ve just got to move forward.”

Also moving forward is Carmelo Anthony. He is the first American to play for the men’s basketball team in four Olympic games. He already has two gold medals and one bronze – but Carmelo wants more.

On the women’s side Diana Taurasi – “White Mamba” as Kobe Bryant called her – wants to add another gold medal to the three she’s already won.

In boxing, three Latinos are vying to put the U.S. back on the podium.

Carlos Balderas, the son of Mexican strawberry pickers, started boxing because he was getting into trouble at school. Now, instead of drugs and gangs, he fights to honor his country.

Nico Hernandez works with his father as a lube tech at a trucking company. He boxes in the memory of his close friend Tony Losey who died in 2014.

Antonio Vargas had a tough time making it to the Olympics – missing out on a couple of chances to qualify – but his desire to compete at the games was stronger than any defeat. He brushed himself off and bounced back even stronger to earn his spot on Team USA.

Anita Alvarez teams up with Mariya Koroleva representing the U.S. in Rio in duet synchronized swimming. The USA has not won a medal in the event since the 2004 games in Athens.

Photos: A look at Latino athletes who will be representing the U.S. in Rio

Laurie Hernandez took the gymnastics world by storm this year. The 16-year-old, one of the youngest on Team USA, made the “Magnificent Seven” with power and grace.

Danell Leyva almost didn’t make it to Rio. The Cuban-born gymnast – who won the all-around bronze medal in London in 2012 – was chosen as an alternate but after an injury prevented John Orozco from going, Leyva got his spot. Pay attention to the theatrics of his coach (and stepfather) during Leyva’s routines.

For water polo captain, Tony Azevedo, going to the Olympics is a sort of homecoming. The 35-year-old was born in Rio but grew up in the U.S. This will be the first time his family in Brazil will see him play live.

Another Olympic veteran is Steven Lopez. The taekwondo master was born in Nicaragua, and with, his brother Mark and sister Diana, all represented the U.S. in the discipline at the 2008 Beijing Olympics.

Melissa Gonzalez is tearing up the field hockey pitch with Team USA. In her second Olympic games, Gonzalez hopes to add a medal to her two Pan American games medals.

Sarah Robles is a 3-time U.S. weightlifting champ. Before the 2012 Olympics, she lived on just $400 a month. She’s fought hard to return to top form after getting a 2-year ban for drugs.

Pedro Pascual had his breakthrough in 2015 when he won the RS:ONE European Championship in windsurfing. This Spanish-born sailor, who has dedicated these games to his grandfather, wants to be an inspiration for other young athletes to pick up the sport.

The U.S. women’s judo team has only taken home 3 Olympic medals in its history, and Angelica Delgado wants to bring home the fourth.

Robin Prendes, who qualified in the men’s lightweight 4 rowing crew, was born in Matanzas, Cuba. His crew finished 8th at the London Olympics, but with a silver at the 2015 Pan Am games, he hopes to make it to the podium in Rio.

Ryan Lochte is jumping into the pool at his fourth Olympics. With 11 medals to his name, this son of a Cuban and Spanish mother is already among the most decorated U.S. swimmers in history. He has a chance to add two more in Rio, and he says his love for the sport is rejuvenated.