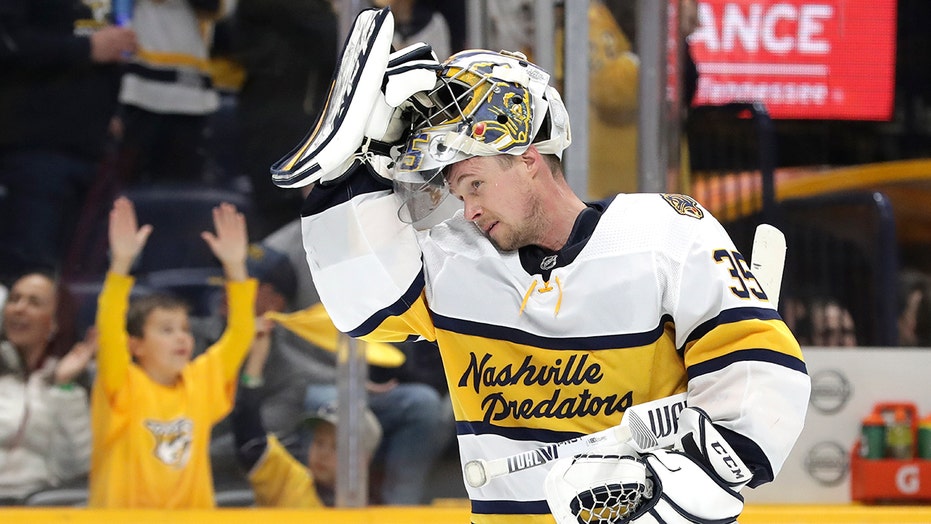 That remains on the list with the season suspended because of the coronavirus pandemic amid concerns that next season will be affected, too. Rinne, a three-time All-Star and former Vezina Trophy winner, keeps dreaming about winning his first Cup.

“I always dream about winning Stanley Cup, and I don’t mind talking about it publicly,” Rinne said Monday. “And, yeah it is my goal, it is our goal. I’m still hopeful. I’m still positive that we (are) going to get back and back to playing and we have a chance to compete again.”

With each passing day, the end of Rinne's career draws closer. The Finn, who turns 38 in November, already has lost his starting job in Nashville to young understudy Juuse Saros.

At least Rinne is under contract for another season. Veterans like Patrick Marleau, Joe Thornton, Jason Spezza, Mikko Koivu, Ryan Miller and Craig Anderson all are in the final year of their contracts and all 37 or older with a chance at their first Stanley Cup slipping away.

Marleau had been hoping for his first championship after being traded to Pittsburgh by San Jose at the trade deadline in February. Marleau has enjoyed the short amount of time that he had with the Penguins before the NHL stopped play.

“Everything’s been great with the organization," said Marleau, who turns 41 in September. "They’ve helped out every step of the way and looking forward to getting out of the house I’m sure like everybody else is and get back to normal and get out there and start playing again.”

Thornton, Marleau's former teammate in San Jose, still is hoping to play another season with the Sharks at the bottom of the West right now. Playoff hopes also were already dim for Anaheim and Ottawa with Miller turning 40 and Anderson turning 39 in the next three months.

Spezza turns 37 in June and had been hoping to lift his first Cup to celebrate.

Minnesota is a point out of the West’s second wild card with Wild captain Koivu now 37. He didn't have an answer about his future for reporters earlier this month. He did acknowledge thinking about all his options.

“I’m in a boat like any other player that is trying to wait for the league to make a decision if we’re going to restart the season and when that would be,” Koivu said. “And if not then obviously trying to figure out what to do with the future and then go from there.”

Rinne used the first couple weeks after the NHL stopped play March 12 to look at himself. The goalie who led Nashville to the franchise’s first Stanley Cup Final in 2017, then won the Vezina on his fourth time as a finalist in 2018 is now a backup.

Rinne is 18-14-4 as a starter this season, and he became only the 12th NHL goalie to score a goal Jan. 9 with an empty netter in Chicago from behind his own goal line. But Saros was in net for Nashville's last six victories with Rinne 1-3-1 in his final five starts allowing 17 goals.

“I realized the fact that I haven’t had the strongest season so far,” Rinne said. “But at the same time, I tried to use this time to my advantage.”

Nashville holds the second wild-card spot in the West and would be in the playoffs if the NHL decided to resume play by jumping straight into the postseason. So Rinne works out daily and works on his hand-eye coordination using juggling and having his girlfriend throw tennis balls at him to be ready for this season or get a head start on next season.

“For sure, right now we’re missing out,” Rinne said. “But again everybody in the league, they’re in the same situation. And we’re dealing this, everybody’s dealing with it differently. But we all in it together. And hopefully, you know, hopefully soon, again, you know, we have a chance to compete for the Stanley Cup.”