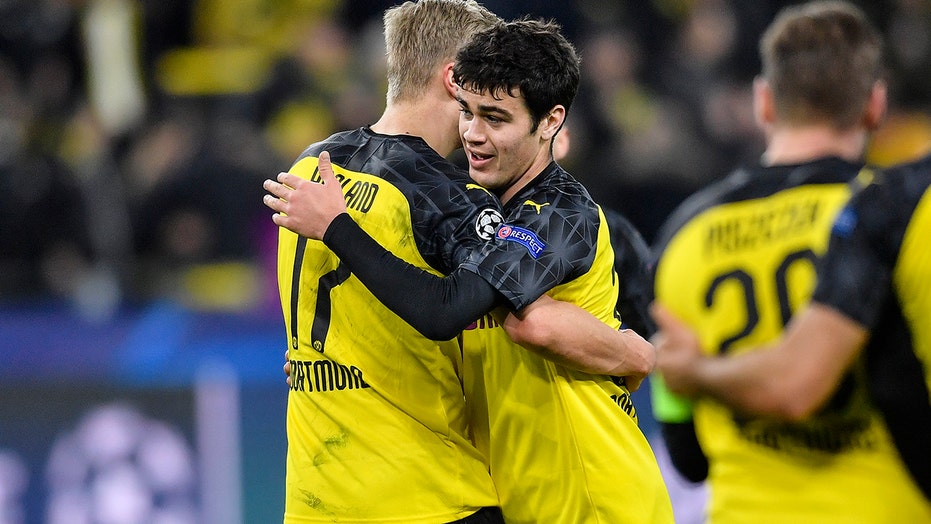 Gio Reyna became the youngest American-born player to appear in the Champions League and assisted on the go-ahead goal, helping Dortmund beat Paris-Saint Germain 2-1 Tuesday night in the first leg of the round of 16.

The 17-year-old son of former U.S. national team captain Claudio Reyna entered in the 67th minute with the score at 0-0.

Dortmund scored two minutes later, but Neymar equalized in the 75th. An assist from Reyna contributed to Erling Haaland's second goal of the match in the 77th. Reyna received the ball at midfield on a quick counterattack, took two touches as he burst into space and fed Haaland at the top of the arc for the winner.

“It's a super pass from Reyna,” Dortmund coach Lucien Favre said. “He plays it in brilliantly. ... He orients the ball very, very quickly."

At 17 years, 3 months, 5 days, Reyna set the record for youngest American. Arsenal's Gedion Zelalem was 17 years, 10 months, 13 days when he played his first Champions League match against Galatasaray on Dec. 9, 2014, but it's not clear whether that was shortly before or after he gained U.S. citizenship.

Dortmund's Christian Pulisic was 4 days shy of his 18th birthday when he made his Champions League debut in a group phase opener at Legia Warsaw on Sept. 14, 2016. Pulisic started and assisted on Dortmund's fifth goal in a 6-0 win.

A member of the U.S. squad at last year's Under-17 World Cup, Reyna made his senior team debut for Dortmund on Jan. 18 in a Bundesliga match at Augsburg. His father appeared in eight Champions League group phase matches for Glasgow's Rangers in 1999 and 2000 and also scored a key goal in a Champions League qualifier in 1999 against UEFA Cup champion Parma.