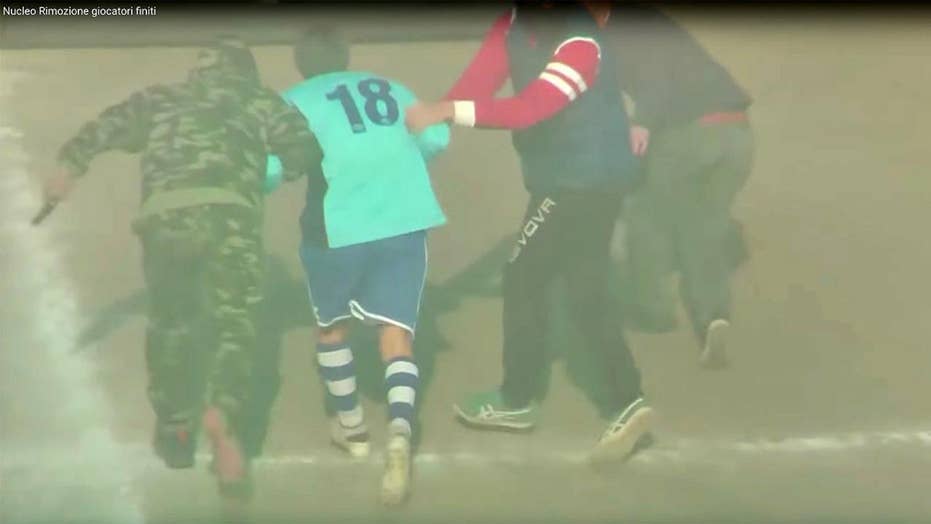 Masked men grabbed Italian soccer player Ignazio Barbagallo from the middle of a match and whisked him away in a helicopter, but the whole thing was a hoax to mark his final game before retirement.

Masked men grabbed Italian soccer player Ignazio Barbagallo -- who was on the pitch playing in the final match of his career last week --  and tossed him in a helicopter, a stunning scene that appeared to those in attendance like a brazen kidnapping.

But Barbagallo, who played for Citta Di Viagrande of the Sicily League, turned out never to have been in harm's way. One of the masked men left a sign on the field to indicate the whole ordeal was a hoax.

The sign read, “SERVICIO ELIMINAZIONE GIOCATORI FINITI,” which means “Elimination for finished players,” according to The Sun.

The stunt didn’t appear to put league officials in a joking mood, however.

FOX Sports Italia reported Citta Di Viagrande was fined more than $220 for the incident. The team was also suspended from playing until June.

Barbagallo, who is known for his pranks, was also suspended until July for leaving the pitch without permission, orchestrating the helicopter landing without permission and causing a dangerous situation, according to FOX Sports Italia. Since he's retiring, though, that penalty doesn't appear to hurt him too badly.