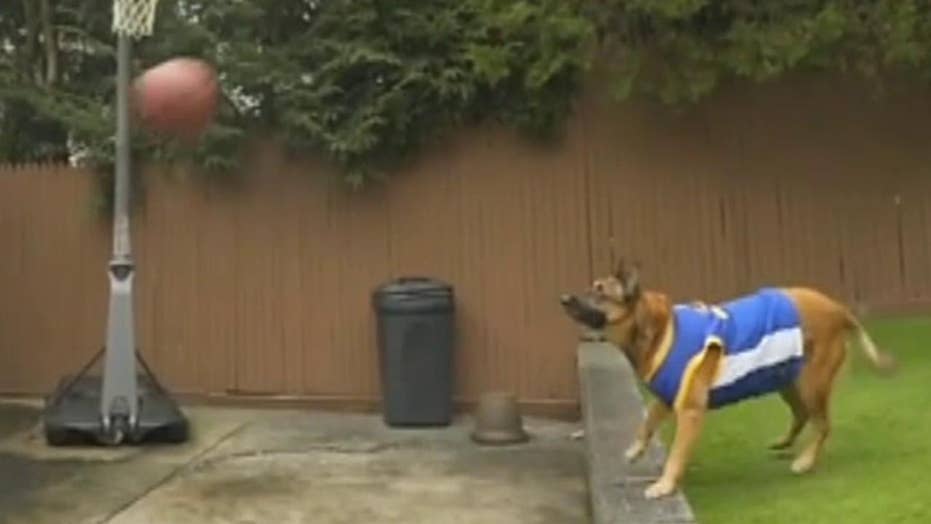 Koa the dog shows off her basketball skills by setting up a dunk for new Harlem Globetrotter Max Pearce.

Pearce told GQ that he was visiting his friend Frank D’Agostino, Koa’s owner, on Tuesday when they decided to shoot the video.

“She’s been viral before, because she was making actual shots,” he told the publication. “You’d throw the ball to the dog and she’d literally head butt it into a 10-foot basket.”

Pearce, who is seen dunking in the viral video, recently signed a one-year contract with the famous Harlem Globetrotters and was previously a semifinalist in the 2018 ESPN College Slam Dunk Contest.

D’Agostino, a firefighter in Yonkers, New York, said he taught Koa how to shoot since she was three-months-old.

Koa, also known as Steph Furry, was rescued by D’Agostino in 2014 after he said she was originally purchased by a circus. After breaking her paw learning to do back flips, she was sent to a veterinarian in Long Island to be euthanized.

D’Agostino said Koa was then adopted by a family who neglected and abused her before he was finally able to take ownership of her three weeks later.

Other videos of Koa have gone viral in the past. The latest video has been shared thousands of times on multiple platforms.

D’Agostino said he’s grateful that video has gone viral because it gives a platform to Koa’s story which he hopes can be an “inspiration to show others what can come from deciding to adopt a rescue animal.”