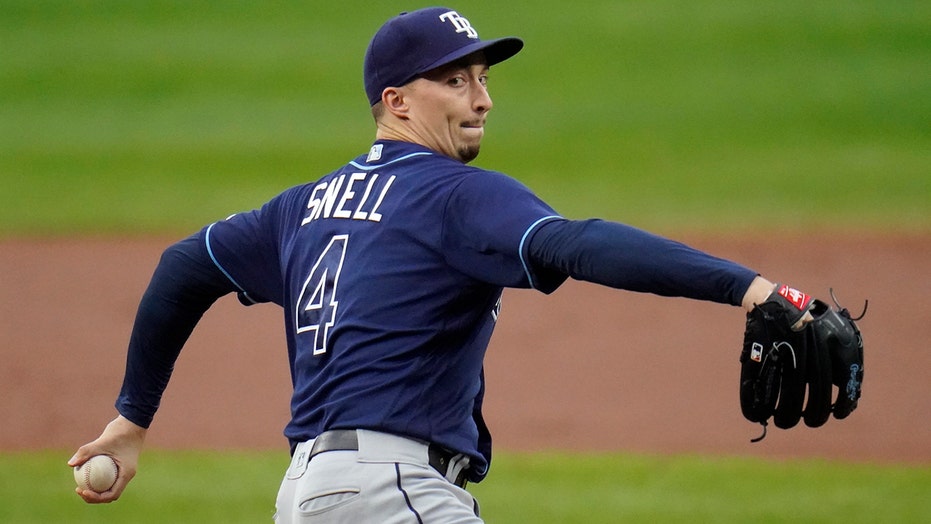 Having clinched a return trip to the postseason, the Tampa Bay Rays marked the occasion with a subdued celebration on the field before heading to the clubhouse, where they slipped on hats and shirts that will serve as souvenirs of the accomplishment.

Make no mistake, the Rays are proud of what they've done, especially under circumstances that have never been faced by any baseball team before this year. After enduring a delayed start to the season, an unyielding battle to avoid COVID-19 and strange rules such as 7-inning doubleheaders, the Rays can only hope that this is merely the first of many goals to be met before the end of October.

“They’ve got their shirts and hats on and they’re excited," manager Kevin Cash said after Tampa Bay qualified for the postseason after completing a doubleheader sweep of the Orioles on Thursday night. “This year has been pretty unique, and it’s our job to turn that uniqueness into something special."

The Rays used a strong pitching performance to win the opener, then cranked up the offense in the nightcap in a 10-6 victory that completed the sweep.

In the opener, Blake Snell and Diego Castillo combined on a three-hitter in a 3-1 win.

Needing a sweep to get into the AL playoffs for the second year in a row, the Rays got homers from Willy Adames, Hunter Renfroe and Joey Wendle before using a four-run fifth inning to break a tie and take control.

The Rays would like to enter the playoffs as AL East champions before making a run toward the World Series. The sweep increased their lead over the second-place Yankees to 3 1/2 games.

“It’s great to get into the postseason," Cash said, “but it would be pretty cool, pretty special, if we could push the envelope and win the division."

In the nightcap, Tampa Bay jumped to a 3-0 lead in the first inning when the slumping Adames connected with two on against lefty Bruce Zimmermann, who was making his major league debut.

Adames came into the game hitless in his last 15 at-bats and 2 for 36 in September.

“It was amazing," Adames said of his long ball. “It’s been a hard time for me but I’m just happy we got those two wins today and are going to the postseason."

The Orioles rallied to tie before the Rays got RBI singles from Nate Lowe and Kevan Smith in the fifth, followed by run-scoring fly balls from Wendle and Randy Arozarena.

Pete Fairbanks (5-3) pitched one inning to earn the win.

Zimmermann (0-1) gave up five runs in three-plus innings. Obtained in the 2018 deal that sent Kevin Gausman to Atlanta, Zimmermann endured a rocky introduction to the bigs.

“I thought he showed good stuff, just made a couple pitches that were up in the zone and paid for it," manager Brandon Hyde said.

In the opener, Baltimore pulled even at 1 in the sixth before the Rays took control against César Valdez (1-1). Arozarena drew a leadoff walk and took third on a double by Michael Perez.

Yoshi Tsutsugo followed with a soft grounder to the right side that produced a run — even though the infield was drawn in — and Brandon Lowe capped the uprising with a sacrifice fly.

Snell left with a 1-0 lead and a runner on second in the sixth. Castillo (3-0) subsequently yielded a tying, two-out RBI single to Ryan Mountcastle.

Snell allowed two hits in 5 1/3 innings, but his only walk — to Pat Valaika leading off the sixth — came around to score.

“The walk to Valaika was very frustrating," said Snell, the 2018 AL Cy Young Award winner. “That’s tough to see. I’ll probably have a nightmare tonight about it. I hate walks. I really just don’t like them."

Orioles rookie right-hander Dean Kremer gave up three hits and three walks with six strikeouts. He has surrendered one run in each of his three major league starts.

The nightcap was the makeup of a game postponed on Aug. 27, when both teams decided not to play as a show of solidarity for victims of social injustice and systemic racism. Because the game was to be held in Tampa Bay, the Rays served as the home team and batted last in Game 2.

Rays: RHP Trevor Richards was 29th man for the doubleheader.

Orioles: RHP Asher Wojciechowski was designated for assignment. Wojciechowski started 16 games in 2019 but this season was 1-3 with a 6.81 ERA.

Rays: OF Austin Meadows left in the third inning of the opener with left oblique soreness and did not play in the second game. “I don’t think it’s that bad," Cash said between games. “It was probably me being more cautious."

Rays: RHP Tyler Glasnow (3-1, 4.47 ERA) starts Friday night in the middle game of the five-game series. Glasnow had a career-high 13 strikeouts in his last start against Baltimore on Aug. 25.

Orioles: RHP Alex Cobb (1-4, 5.03) tries to break a four-game losing streak and earn his first victory at Camden Yards since joining the Orioles in 2018.