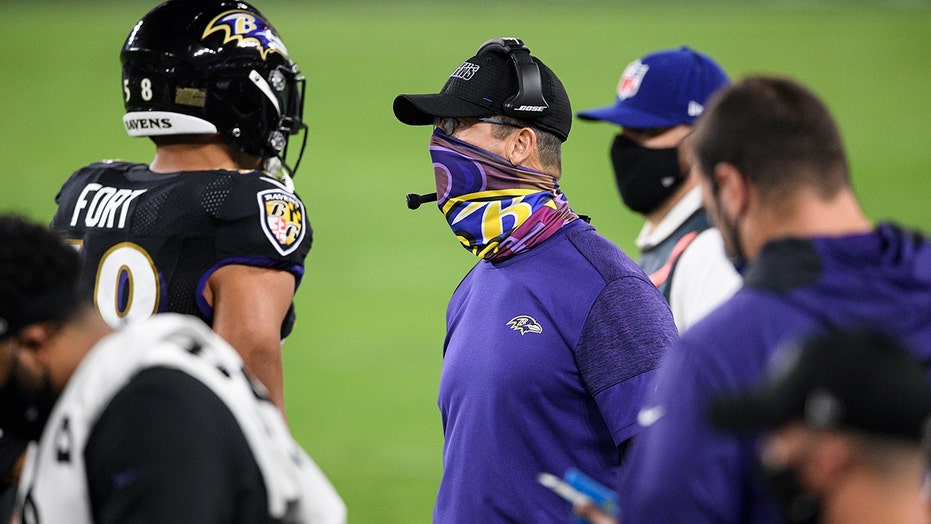 The NFL made clear it’s not going to tolerate coaches who skirt rules about wearing a face-covering during games and Baltimore Ravens coach John Harbaugh could be in the crosshairs next.

Harbaugh was criticized by fans watching the Ravens take on the Kansas City Chiefs for getting into the referee’s face arguing about a penalty call.

Harbaugh took down his neck gaiter to yell at the side judge.

NFL Commissioner Roger Goodell told USA Today that the fines are “consistent with the message” the league established before the start of the season.

PATRIOTS' CAM NEWTON ON NOT MOVING FAMILY TO BOSTON AREA: 'THIS IS A BUSINESS TRIP FOR ME'

“You can’t let up,” he said. “We’ve got to consistently do the things that have gotten us to this place and not think, ‘Okay, things have gone so well, so it’s okay now.’ It’s not. You’ve got to stay on your toes and we’ve got to continue to be disciplined.”

The punishment was meted out a week after the NFL reminded team personnel on the sidelines about the rules for wearing face coverings during the coronavirus pandemic.

More coaches and clubs can expect similar punishments as the memo last week from Troy Vincent, who oversees the league’s football operations, was largely ignored throughout the weekend.