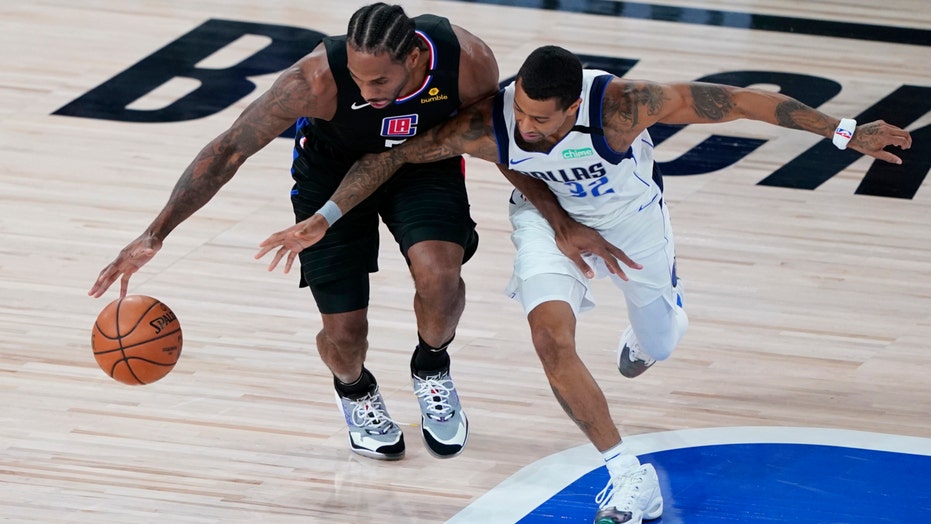 Are politics beginning to seep into sports?

Fox Sports NBA analyst Chris Broussard reacts to whether sports leagues have become political action committees, saying it's not permanent but athletes are using their platform to campaign for causes that matter to them.

At least two NBA buses were blocked from entering the Walt Disney World Campus in Orlando, Fla., on Saturday night by a small group of protesters.

The protesters, with some holding signs and shouting into megaphones, said they wanted stars LeBron James and Russell Westbrook to get more involved in the reckoning over racial justice.

According to multiple reports, the group was chanting “Black Lives Matter” and “LeBron can you help us?” Some protesters were also carrying signs with messages such as “Russell Stand With Us.”

The buses were carrying media members and some NBA staff. No players or team personnel were affected. That night, the Los Angeles Lakers and Houston Rockets had played the fifth game of their playoff series.

The protesters gathered on a road open to the public, then stopped the buses near a primary entrance to a resort. All entrances to the NBA bubble are secured by law enforcement and private security officers. It’s unclear whether any of players saw the protesters.

A small number of protesters of the August shooting in Central Florida of a Black man, Salaythis Melvin, hold signs and shout into megaphones, briefly blocking a bus chartered by the NBA from entering the Walt Disney World campus in Lake Buena Vista, Fla., Saturday night, Sept. 12, 2020, with the group saying it wanted LeBron James, Russell Westbrook and other top players to take notice. (AP Photo/Tim Reynolds)

Protesters also carried signs asking for justice for Salaythis Melvin, a Black man who was fatally shot in the back by an Orange County, Fla., sheriff’s deputy in August. Officials have said that Melvin was armed, while attorneys for his family have said he posed no threat to the deputy. The incident took place 15 miles from the NBA bubble.

Social justice initiatives have been at the forefront of the NBA restart. Earlier in the playoffs, the Milwaukee Bucks forced a postponement of playoff games when they didn’t appear on the court to raise awareness in the Jacob Blake case. It caused other postponements in the league and in several other sports.