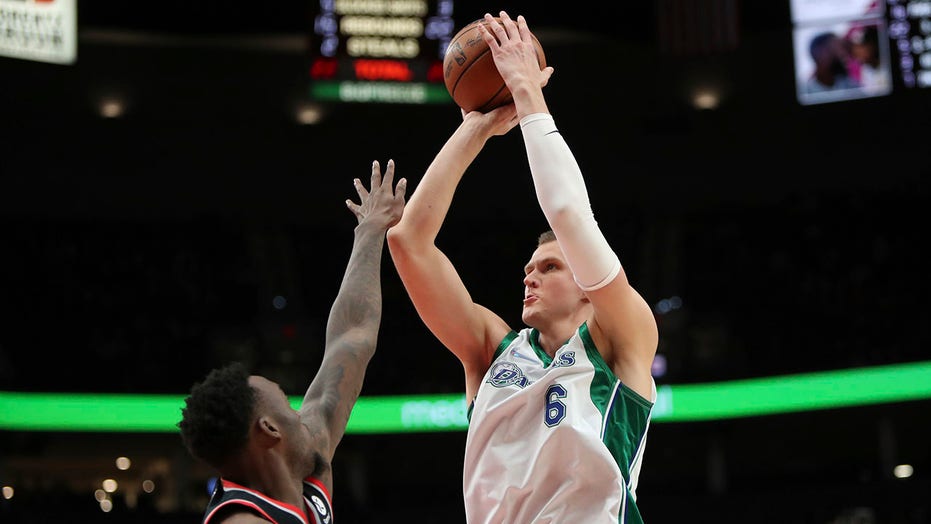 Kristaps Porzingis had a season-high 34 points and nine rebounds, and the Dallas Mavericks beat the Portland Trail Blazers 132-117 on Monday night.

Both teams were short-handed. The Mavericks were missing six players, including star Luka Doncic, in the NBA’s health and safety protocols. Portland had seven players in the protocols, as well as head coach Chauncey Billups.

Dwight Powell scored a season-high 22 points for Dallas, and Brandon Knight came off the bench to score 18 points in his third game with Dallas after signing as a hardship exemption on Dec. 23.

"In the paint, we had almost 70 points," Mavericks coach Jason Kidd said. "I thought (Porzingis) let the ball come to him tonight, he didn’t force anything. If they didn’t double, he went to score and if they did he found the open guy. I thought his rhythm was great from start to finish."

Kidd believes the way the Mavericks have played lately may lead to some "tough decisions" when they have their full roster available.

"We’ve kept things simple," Kidd said. "They’re playing hard, and in this league if you play hard it puts you in a position to win. We’re going to have hard decisions to make when this team gets healthy."

Damian Lillard led the Trail Blazers with 26 points. Nassir Little had a double-double with 20 points and 10 rebounds.

After the Blazers briefly tied the game at 41-all on a dunk by Little, the Mavericks seized control behind the play of Porzingis, who scored 24 of his points in the first half and spurred the Mavericks to a 72-53 halftime lead.

In his first game back after being in health and safety protocols, Mavericks guard Josh Green provided a spark off the bench by handing out a team-high 10 assists.

"All his passes were impressive, but his intent to attack picked up where he left off," Kidd said of Green. "Even after COVID, he was driving the ball and finding teammates. He made some incredible passes tonight."

With 9:49 left and the Mavericks up 112-89, Porzingis received a technical foul. He promptly made up for the technical with a three-point play on a slam dunk a few seconds later.

Mavericks: Kidd said the team expects guard Reggie Bullock to meet them in Sacramento for their upcoming two-game set against the Kings. ... While Kidd is still waiting on other players, he believes the Mavericks and the rest of the league will have to navigate the virus for the rest of the season. "Once we get everybody back, it’s just going to stop and COVID is going to leave us. It’s just part of life right now. It’s part of the fabric."

Trail Blazers: The Blazers are going through their own issues in the health and safety protocols. After previously not having any players miss time in the protocols, the Blazers had seven players and two coaches, Billups and assistant coach Roy Rogers, on Monday night. Brooks said Billups and all players are feeling "fine." ... Starting guard CJ McCollum remains out, although he is not in the protocols. The team says he has fully healed from a collapsed right lung. ... Portland had not played since Dec. 21, with their scheduled game on Dec. 23 against the Brooklyn Nets being postponed due to the Nets not having enough available players.

Mavericks: At the Sacramento Kings on Wednesday night.