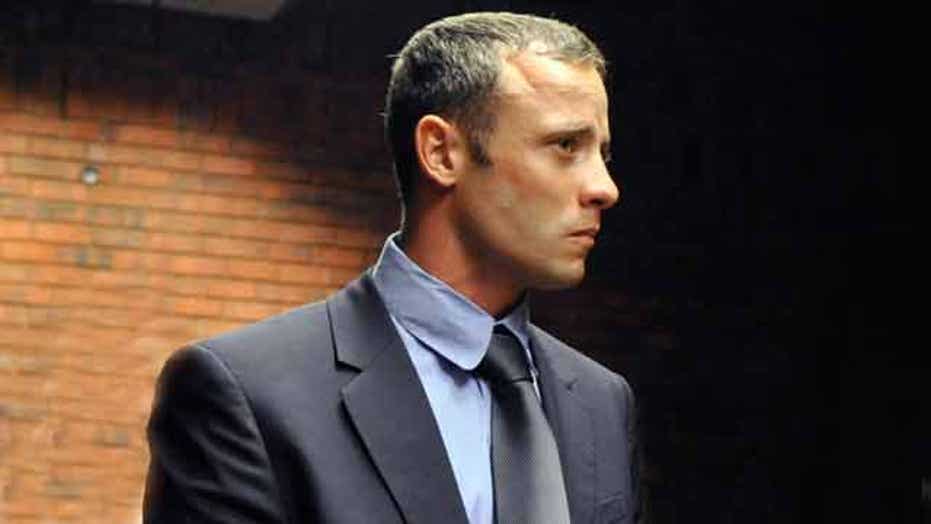 A South African police detective testifying at Oscar Pistorius' bail hearing Wednesday said the famed double-amputee Olympian shot his girlfriend to death from a high angle, despite an affidavit claiming he wasn't on his prosthetic legs when he opened fire.

In an additional revelation, police also said they found two boxes of testosterone and needles in Pistorius' bedroom. But later, Medupe Simasiku, a spokesman for South Africa's National Prosecution Agency, said it is too early to identify the substance as it is still undergoing laboratory tests.

Pistorius’ attorney, Barry Roux, said the substance was a "herbal remedy," and not a steroid or a banned substance

The name of the drug, offered later in court by Roux, could not be immediately found in reference materials by The Associated Press.

An International Paralympic Committee spokesman says Pistorius was drug tested on Aug. 25 and Sept. 8 last year and both were negative.

Pistorius said in an affidavit read in court Tuesday that he and girlfriend Reeva Steenkamp, a 29-year-old model and budding reality TV star, had gone to bed and that when he awoke during the early morning hours of Valentine’s Day last Thursday, he detected what he thought was an intruder in the bathroom.

Pistorius said he wasn't on his prosthetic legs when he fired into the door and then realized his tragic error when he backed away to his "pitch dark" bedroom and realized that Steenkamp was not in bed.

But Detective Warrant Officer Hilton Botha, a 16-year police veteran, said the trajectory of the bullets showed the gun was fired pointed down and from a height of five feet. Police found three spent cartridges in the bathroom and one in the hallway connecting the bathroom to the bedroom.

The prosecution is attempting to cement its argument that the couple had a shouting match, that Steenkamp fled and locked herself into the toilet and that Pistorius fired four shots through the door, hitting her with three bullets.

Prosecutor Gerrie Nel has said the killing was premeditated because Pistorius took time to put on his prosthetic legs before the shooting.

Nel projected a plan of the bedroom and bathroom for the courtroom and argued Pistorius had to walk past his bed to get to the bathroom and could not have done so without realizing the Steenkamp was not in the bed.

"There's no other way of getting there," Nel said.

Botha said the holster for the 9 mm pistol was found under the side of the bed on which Steenkamp slept — also implying it would have been impossible for Pistorius to get the gun without realizing that Steenkamp was not in the bed and could have been the person in the bathroom. Pistorius testified Tuesday that the bedroom was pitch dark.

Botha said Steenkamp was shot in the head over her right ear and in her right elbow and hip, with both joints broken by the impacts.

However, Roux asked Botha if Steenkamp's body showed "any pattern of defensive wounds," and the detective said it did not.

And when asked if the police found anything inconsistent with the version of events presented by Pistorius -- who claims it was an accidental shooting and not murder -- Botha responded that they had not.

On the morning of the shooting, police also found two iPhones in the bathroom and two BlackBerrys in the bedroom, Botha said, adding that none had been used to phone for help. Pistorius had said that he called the manager of his guarded and gated housing complex and a private paramedic service.

Roux said Pistorius did make calls, including to the guards of the housing estate. In one case, he said, a guard could hear Pistorius crying. "Was it part of his premeditated plan, not to switch off the phone and cry?" Roux asked sarcastically.

Nel said Wednesday that a witness can testify to hearing "non-stop talking, like shouting" coming from Pistorius’ home between 2 a.m. and 3 a.m. before the predawn shooting.

Under cross-examination, Botha acknowledged that the witness who allegedly overheard argument was 600 yards from Pistorius' house, where the shooting occurred.

But later, prosecutor Nel re-questioned Botha, and the detective said the distance was actually much closer.

Botha also said Pistorius did not have a license for a .38-caliber weapon and consequently his possession of ammunition for such a weapon was illegal, and another detective testified that Pistorius is a flight risk and shouldn't be granted bail.

Steenkamp's shooting death and Pistorius' arrest and murder charge has stunned South Africa, where he is a national hero. It also sent shock waves across the world, which knows Pistorius as a disabled sports icon known as the ‘Blade Runner’ and an inspiring story of someone who overcame adversity and the amputation of his lower legs as a baby to become an Olympic athlete.