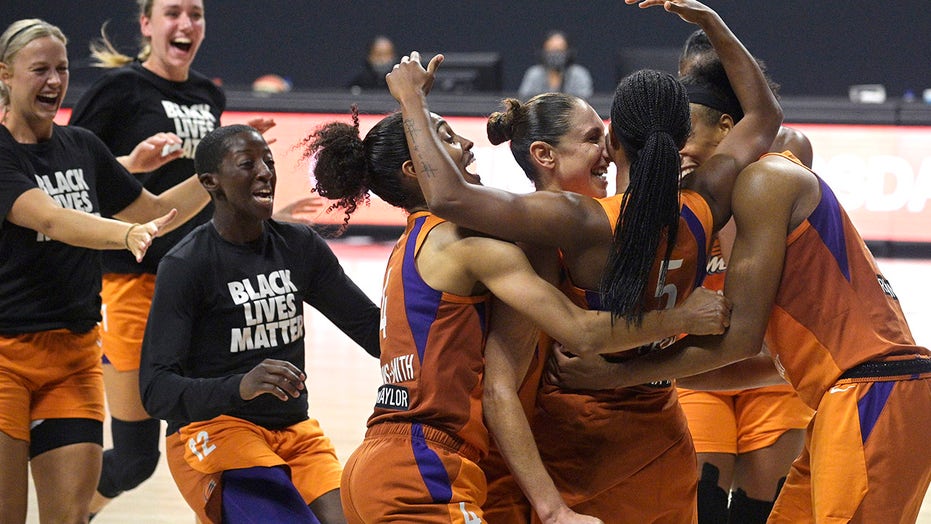 Shey Peddy made a buzzer-beating 3-pointer to give the Phoenix Mercury an 85-84 victory over the defending WNBA champion Washington Mystics on Tuesday night in the first round of the playoffs.

Fifth-seeded Phoenix moves on to play No. 4 seed Minnesota on Thursday in the second round.

“For me to hit that shot against them is a fairy tale moment,” said Peddy, who was cut by the Mystics last month. “I don’t think it can get any better than that.”

Leilani Mitchell went 1 of 2 from the free-throw line with 5.8 seconds remaining to give Washington an 84-82 lead. After a timeout, Diana Taurasi inbounded it to Skylar Diggins-Smith, who drove the lane and lofted a pass over the defense across the court to the corner. Peddy pump-faked it to get her defender in the air and calmly beat the buzzer.

“She’ll never forget that. The girls are loving on her,” Mercury coach Sandy Brondello said. “She’s a veteran, 31 years of age. Took the moment and made the shot. She had to take the shot. It's a really great story. She's a humble person and I love having her around.”

Washington brought Peddy in last year after cutting her in training camp when two of the Mystics left to play overseas. She was on the roster as a 30-year-old rookie for about a month before the players returned and she was cut. Coach and general manager Mike Thibault liked having her around so much that he offered her a video and analytics assistant position, which she accepted, and she finished out the championship season in that role.

When Thibault called her a month before this season started, Peddy assumed it was to see if she wanted to be a coach again. He said the team needed players and offered her a spot on the roster. She played the first month of this season with the Mystics before they cut her. She then signed with the Mercury.

Peddy finished with 12 points for Phoenix on Tuesday night. Diggins-Smith had 24 points, six rebounds and five assists and Taurasi, who improved to 7-0 in single-elimination playoff games, added 23 points. The Mercury went on a 17-0 run over a five-minute span for a 78-73 lead.

“Phoenix made a great comeback and they outplayed us in the fourth quarter,” Thibault said. “One of the tougher losses I had since I have been in Washington. I feel so bad for these players for how hard they worked. They had a chance to advance.”

The Mystics were missing four projected starters from last season's championship team as Elena Delle Donne was recovering from a back injury and Tina Charles received a medical exemption. Natasha Cloud and LaToya Sanders opted not to play. All are expected back next year.

Meesseman’s steal and fast-break layup capped a 5-0 run to give Washington a 83-82 lead with 38.8 seconds left. And after a timeout, Myisha Hines-Allen drew an offensive foul on Diggins-Smith for Phoenix’s third straight possession with a turnover.