Mark McGuire, a N.Y. Giants football fan, standing near the front door of the Orchids of Asia Day Spa after New England Patriots owner Robert Kraft was charged with soliciting for sex in Jupiter, Florida. (Photo by Joe Raedle/Getty Images)

Talk about kicking a billionaire when he's down!

New England Patriots haters are now making a pilgrimage to the Florida shopping-center massage parlor where the Supre Bowl champion team’s owner allegedly was a customer.

They came to take selfies and display their shock at the human-trafficking prostitution sting that’s snagged many big names. 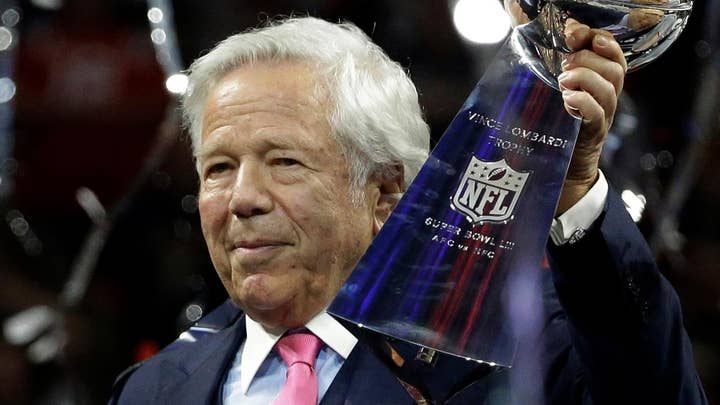 “I am a Jets fan, so I’m here to take a picture,” a Long Island, New York man named Steve, 51, told The New York Post while on holiday. “It’s so sad — you’re reading all this stuff, and Kraft was contributing to all of this.”

Robert Kraft, 77, faces charges of soliciting a prostitute after he was twice videotaped in a sex act at the Orchids of Asia Day Spa in Florida between Jan. 18 and Jan. 22, police said Friday.

Kraft was identified along with 25 other suspected johns, investigators said.

Matthew Gizze (L) and Kevin Brown, both of whom are N.Y. Jet football fans, stop to look at the Orchids of Asia Day Spa where New England Patriots owner Robert Kraft is charged with allegedly soliciting for sex in Jupiter, Florida. (Photo by Joe Raedle/Getty Images)

“Spending a long time in Boston and not being from there, I have a long animosity towards the Patriots,” said lawyer Rachel Mozzarella, 34, of Florida, who came to the spa to take a selfie.

The spa Kraft allegedly visited is in a busy, upper-middle-class shopping center with neighbors that include a dentist, a real estate office, surf and bike shops and a supermarket.

The owner of Orchids of Asia, 58-year-old Hua Zhang, was arrested Tuesday on 29 prostitution and related charges. Police in her arrest report said they watched video of her employees performing various sex acts with two dozen customers. Her attorney, Gennaro Cariglio Jr., had no comment.

Mozzarella added that she thought it was “amusing he was caught this way, but it’s also highlighting the issue of sexual exploitation.”

The Patriots won the Super Bowl this month over the Los Angeles Rams for their sixth NFL championship in the past 18 seasons, making them the most successful team in pro sports during that span. Before the Super Bowl, several retired NFL players appeared in a public service announcement decrying sexual exploitation and human trafficking in Atlanta, the host city.

Kraft lives in Massachusetts and has a home in the Palm Beach area. Kraft’s wife, Myra Hiatt Kraft, died in 2011.

Kraft, who made his initial fortune through a packaging company, bought the Patriots in 1994 for $172 million to keep the team from moving to St. Louis. He hired Bill Belichick as coach in 2000, and the team later drafted quarterback Tom Brady, launching its nearly two decades of success.

At the spa, people shouted “Kraft cheese” as they posed for selfies.

“I can’t believe how many morons like me are here taking a picture,” a man identified as Brock P. of Jupiter said. “Now this place is a historical site, it’s a tourist attraction — everyone wants a picture.”