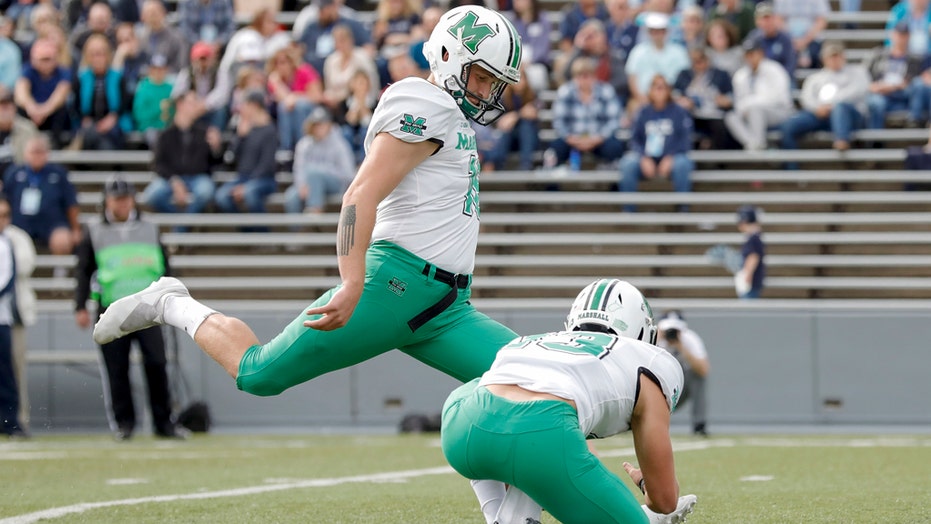 Rohrwasser told CBS Boston the tattoo, linked to The Three Percenters, doesn’t represent who he is and that he got it when he was 18. He said he didn’t know what the ink symbolized before he got drafted over the weekend.

“I went on to Twitter and I saw the tweet. I saw that someone had taken a picture of me and put it with my tattoo and linking me to some horrific events, you know, obviously Charlottesville and these horrible things,” he told the station, adding that it never came up when he played at Marshall University.

Rohrwasser initially said he was going to cover up the tattoo, but changed course over the last few days.

“As soon as I saw what it was linked to on Saturday, it was exactly that time I knew I had to get it totally taken off my body. I said cover it up [to reporters], but I want to get it removed from my body. It’s shameful that I had it on there ignorantly,” he said.

Justin Rohrwasser was taken in the fifth round on Saturday. (Photo by Tim Warner/Getty Images)

“I’m sorry for all my [friends and] family that have to defend me. Putting them in that compromising position is one of the biggest regrets I’ll ever have, so to them, I’m sorry. I’m going to learn from this. No matter what, it’s not who I am, hopefully you’ll all find that out.”

Last year, Rohrwasser’s told The Herd Zone his tattoos were “all random.”

Rohrwasser, a fifth-round draft pick, said Saturday the Patriots are getting a guy who is a “hard worker and somebody who is going to chase after the best version of themselves and a good teammate.”

He hit 85.7 percent of his field goals last season at Marshall.