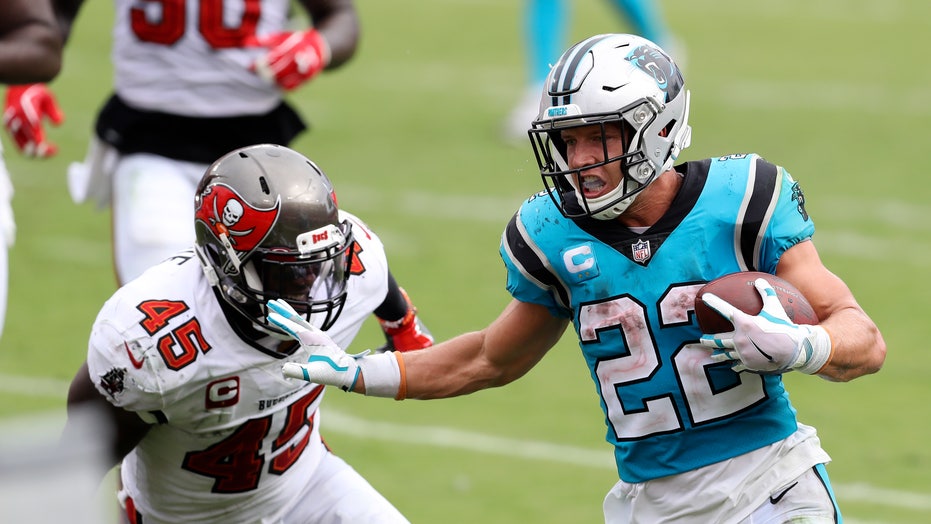 Christian McCaffrey said he plans to attack his rehabilitation from a high ankle sprain the same way he does everything else — with a full head of steam.

The All-Pro running back is expected to miss “multiple weeks” with a high right ankle sprain he sustained in Carolina’s 31-17 loss to the Tampa Bay Buccaneers on Sunday.

“I have prided myself on being on the field (but) freak accidents happen a lot, and this is one of them,” McCaffrey said Monday. “If you look around the league there are a lot of guys who are down right now. The biggest thing you can do is stay strong and fight through it. They say (I will be out) four-to-six weeks, well, that’s a challenge to me and hopefully I get back a lot earlier than that. I’m going to attack this like I attack anything else and just go from there.”

The Panthers (0-2) will turn to Mike Davis as their starting running back when they visit the Chargers this Sunday.

Davis had eight catches for 72 yards but no carries against the Bucs as the Panthers found themselves in catch-up mode in the fourth quarter. The team is also expected to sign Reggie Bonnafon, McCaffrey’s primary backup last season, from the practice squad to provide depth.

“I hate it for him,” Panthers coach Matt Rhule said. "No one wants to be out there more than Christian does. But everything happens for a reason. I’m sure he is rehabbing right now.”

McCaffrey said the injury happened “four or five plays” before he left the game for good early in the fourth quarter following his second touchdown run of the game.

“As soon as the third quarter ended I went and got taped and tried to play it off,” McCaffrey said. “I played a couple of plays and realized that I wasn't 100%. I went to the sideline and it started getting worse and worse. I realized it would be inefficient if I continued to play due to the level that I was at.”

McCaffrey, who has a reputation for taking incredible care of his body, has played 50 straight games since entering the NFL.

“It's really frustrating," McCaffrey said. "But it is the nature of the beast. It happened. The only thing you can do now is try to fix it. The more and more you tell yourself this sucks the less time you are focusing on taking care of it.”

Added Rhule: "He was upset that he wasn't out there at the end to help us."

In two games this season McCaffrey has run for 156 yards and four touchdowns and caught seven passes for 67 yards.

The loss of McCaffrey is a devastating blow for the Panthers' offense. He was the team's best offensive playmaker in 2019, becoming only the third player in NFL history to eclipse 1,000 yards rushing and receiving in the same season. The Panthers rewarded the fourth-year running back with a four-year, $64 million contract making him the highest-paid running back in the league.

Rhule said Davis is a “starting tailback in the National Football League and was ready to play. He will play well in Christian's absence.” Rhule said the offense won't change with Davis in the starting lineup. “He made the most of his opportunities on Sunday,” Rhule said.