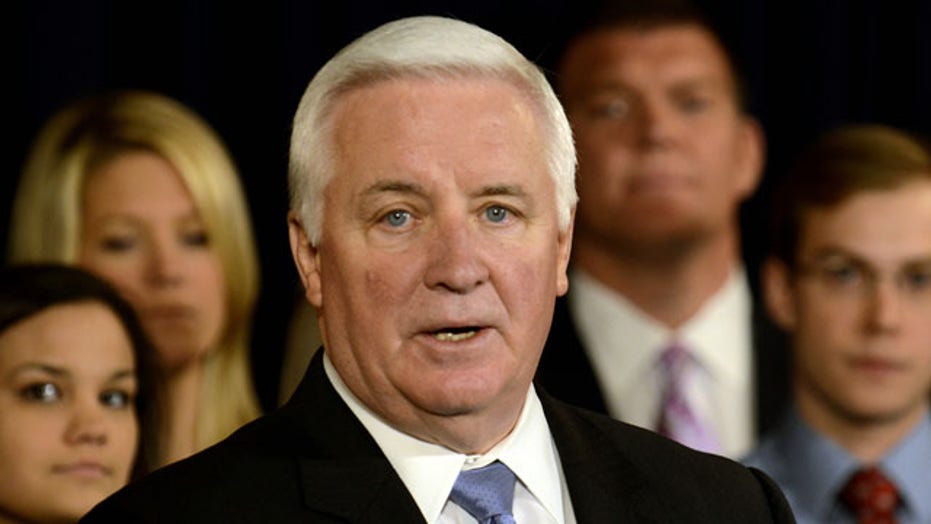 Harrisburg, PA – Pennsylvania governor Tom Corbett said he is suing the NCAA over sanctions the organization levied against Penn State last summer in the wake of the Jerry Sandusky child sexual abuse scandal.

A four-year football postseason ban, five years probation and a vacation of all wins dating to 1998 were among the significant penalties revealed by NCAA president Mark Emmert last July.

Corbett, in a news conference Wednesday, called the NCAA's actions "overreaching and unlawful." He said the penalties would result in "irreparable economic damage to the university, the commonwealth and its citizens."

Penn State was also slapped with a $60 million fine that the NCAA said was to go toward an endowment for "external programs preventing child sexual abuse or assisting victims."

Corbett said the lawsuit, filed Wednesday in U.S. District Court in the state capital of Harrisburg, will ask for all sanctions, including the fine, to be thrown out.

In response, the NCAA issued a statement and said the lawsuit appears "to be without merit" and "is an affront to all of the victims in this tragedy."

The university was punished for its collective failure to report Sandusky, a former assistant football coach who was convicted on 45 counts of sexual abuse against 10 boys over a 15-year period, to the proper authorities.

"While what occurred at Penn State was both criminal and heinous," Corbett said, "the conduct for which Penn State was sanctioned consisted of alleged failures to report criminal activity on campus that did not impact fairness or integrity on the playing field."

Penn State was penalized without the usual lengthy NCAA investigation. Instead, the NCAA relied heavily on the Freeh Report, the findings of an investigation commissioned by Penn State's board of trustees and conducted by former FBI director Louis Freeh.

The Freeh Report accused many Penn State senior officials, including the late Joe Paterno, school president Graham Spanier and athletic director Tim Curley, of concealing "critical facts relating to Sandusky's child abuse from the authorities, the board of trustees, Penn State community, and the public at large."

Corbett said the NCAA forced Penn State into the sanctions, threatening the university with the "death penalty," a complete shut down of the football program for four years, if the school fought the issue.

"These sanctions did not punish Sandusky for his despicable and criminal action," Corbett concluded. "Nor did they punish the others who have been charged criminally. Rather, they punished the past, present and future students, current and former student-athletes, faculty members, local businesses and the citizens of Pennsylvania who have come to cherish this great university."

The NCAA's response added that Penn State has "accepted the consequences for its role and the role of its employees and is moving forward. Today's announcement by the governor is a setback to the university's efforts."

Penn State, under first-year coach Bill O'Brien, had a successful season with a record of 8-4.