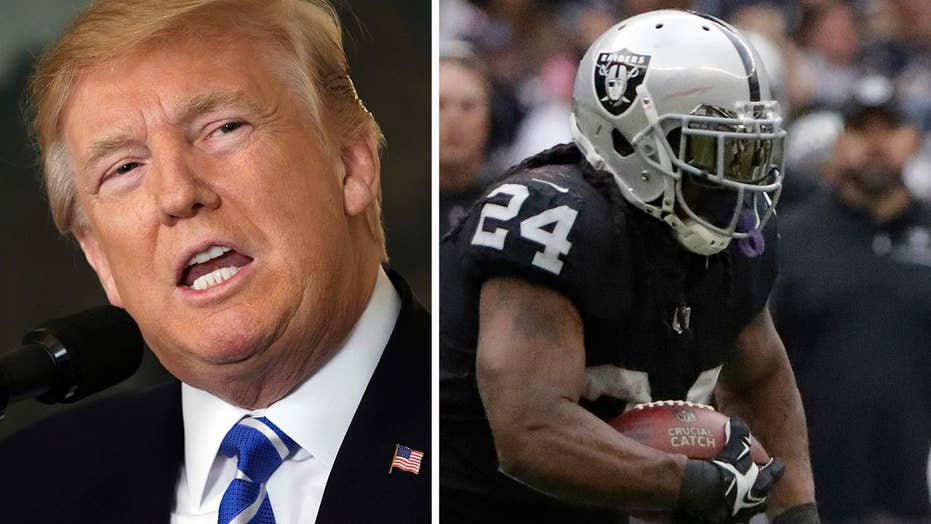 Oakland Raiders running back Marshawn Lynch on Friday took a jab at President Donald Trump and commented on gentrification in Oakland when he appeared on HBO’s “Real Time with Bill Maher.”

“That motherf----er say a lot of s—t,” he told host Bill Maher, according to SF Gate. “You call me unpatriotic but you come to the neighborhood where I'm from and you'll see me take the shirt off my back and give it to someone in less need, what would you call that?”

Trump targeted Lynch for allegedly sitting down for "The Star-Spangled Banner" while standing for the Mexican national anthem when the Raiders played the New England Patriots at Azteca Stadium in Mexico City in November 2017.

"Marshawn Lynch of the NFL’s Oakland Raiders stands for the Mexican Anthem and sits down to boos for our National Anthem. Great disrespect! Next time NFL should suspend him for remainder of season. Attendance and ratings way down," he tweeted.

Lynch then commented on gentrification in Oakland and what the term means to him.

“It's basically when a lot of white people move into the hood and kick everybody out that's there,” Lynch said. “I've been a witness of this since I was a small jitterbug, so now I'm that I'm growing up and I'm seeing it and I understand it a bit more.”

He added that he’s buying up real estate in Oakland as an effort to combat gentrification.

Lynch, should he return to the gridiron next year, would be entering his 11th season. He played six games for the Raiders in 2018 and rushed for 376 yards and scored three touchdowns.