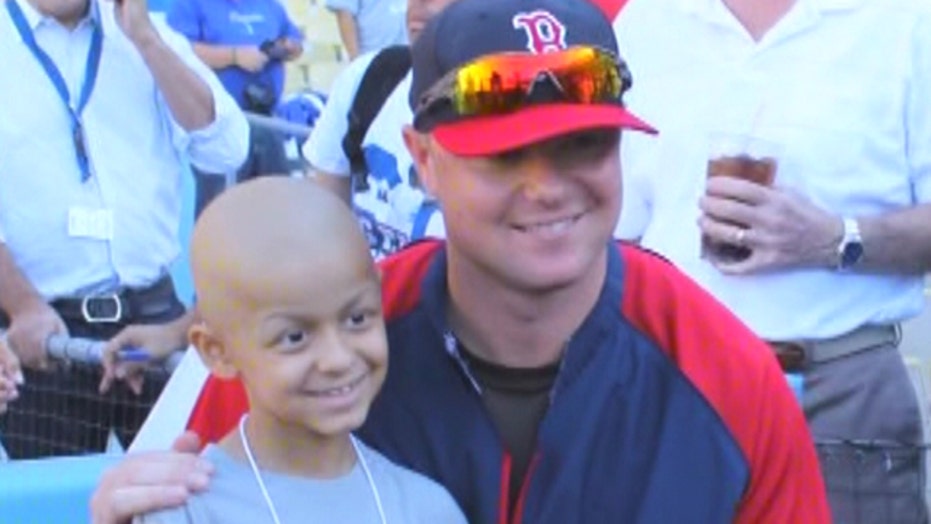 There are a lot of people that want to see Oakland A’s pitcher Jon Lester get wet, including his former teammate David Ortiz and a special little boy who formed an even tighter bond with the left-handed ace.

Ortiz, who recently submitted to the Ice Bucket Challenge, the national craze in which celebrities good-naturedly get doused with ice water in a campaign to raise awareness ofamyotrophic lateral sclerosis, commonly known as ALS or Lou Gehrig’s disease, recently called out his old Red Sox teammate, traded to the contending A's earlier this year. If Lester takes the dare, he'll join Ortiz, Bill Gates, LeBron James, Chris Christie and Taylor Swift among others. And Zein Youssef will happily do the honors.

Zein, 7, who is battling brain cancer, formed an emotional bond with Lester, himself a cancer survivor, prior to the Red Sox' World Series championship last fall. The brave little boy was on the lefthander's mind as he took to the mound, and even Fox broadcasters Joe Buck, Tim McCarver and Ken Rosenthal saluted the hurler for his work on behalf of the Pediatric Cancer Research Foundation and showed the picture that Lester had tweeted out several days before.

The pair first met a year ago, before the Red Sox took the field against the Los Angeles Dodgers. Lester met Zein as part of his effort to comfort and inspire young patients and their families before games all over the country as part of Pediatric Cancer Research Foundation's NEVER QUIT program.

Zein asked Lester if cancer was "hard," and Lester told the truth.

Now, Zein and his family have called on Lester, Jeri Wilson, executive director of the Pediatric Cancer Research Foundation, and this reporter to take the Ice Bucket Challenge. And Lester, who regularly tweets news of Zein's medical battles to his 273,000 Twitter followers, generally does what his little pal wants.

Later this month, the Oakland A’s will be playing an important four-game series.Lester will meet and greet several families who have children who are undergoing treatment for cancer.But, at some point, there will be private time between the Lester family and the Youssef family.It could also prove the perfect time to dunk Lester in the name of another dreaded disease.

As for those others of us who were issued the Ice Bucket Challenge by Zein, we'll be ready, too.

Don Fair, a coordinating producer for Fox News’ Los Angeles bureau, earlier this year celebrated his 10th year being cancer-free after a bout with non-Hodgkin's lymphoma.