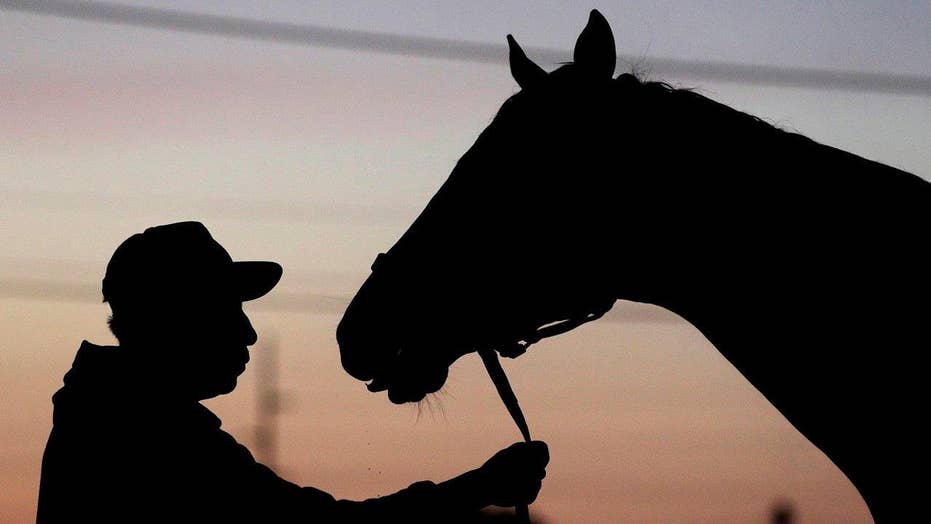 Go ahead and pity Kentucky Derby favorite Nyquist. He has the unenviable task of following in the hoof prints of Triple Crown champion American Pharoah, and so far isn't getting the respect expected for the only undefeated horse in the race.

Nyquist heads into the Run for the Roses on Saturday at Churchill Downs as the early 3-1 favorite in a full field of 20 horses. Deservedly so, based on a resume that includes being a champion at age two, victories at four different tracks in the East and West, and an ability to overcome all sorts of obstacles in his races.

Still, Nyquist isn't the buzziest of horses. Heck, even his owner J. Paul Reddam said that as a fan he'd bet against his horse. Handicappers and racing fans haven't been talking up the bay colt named for Detroit Red Wings player Gustav Nyquist (Reddam is a fan) either.

Nyquist has won his seven races, including four prestigious Grade 1s, by a combined 15 lengths — an average of just over two lengths. He rarely does more than he needs to and nothing dazzling. He tends to drift out in the stretch, which could indicate the distance he's run is about as far as he wants to go. He doesn't even have any markings — no blaze on his head, no white stockings on his feet.

His sire, Uncle Mo, was a juvenile champion and the 2011 Derby favorite scratched the day before the race with an illness. Nyquist is one of his three offspring in the race, but nobody knows if Uncle Mo's first crop of foals can run the classic distance of 1 1/4 miles because there is no proven pedigree.

Yet Nyquist has a supporter in Bob Baffert, the Hall of Fame trainer who guided American Pharoah.

"He does it workmanlike, but he does it fast. When you're fast and you stay out of trouble in a 20-horse field, that's a big edge," Baffert said. "He's got the heart, and a horse with heart will go further than they're supposed to go."

In a year of can-you-top-a-Triple-Crown winner, Nyquist has already done so financially. He's earned a record $3,322,600, including a $1 million bonus for winning the Florida Derby in his last race.

None of the doubt deters Doug O'Neill, who trains Nyquist.

"I'm optimistic we're going to win," he said. "He's definitely shown us that he's going to run a big race."

O'Neill reached the Derby winner's circle in 2012 with I'll Have Another, who went on to win the Preakness Stakes. The colt was scratched the day before the Belmont Stakes because of a career-ending tendon injury, dashing the sport's hope of a Triple Crown winner.

"It took a few minutes of being depressed and feeling sorry for yourself, but it quickly jumped into how amazing it was to win the Derby and the Preakness," he recalled.

O'Neill was dogged by controversy throughout the Triple Crown series that year for past medication violations. He served a suspension after the Belmont as punishment for one of his other horses testing positive for a higher than allowed limit of a drug. In 2014, O'Neill was forced to sit out the Breeders' Cup world championships under that event's "convicted trainer rule."

He is eager to put the past at rest when asked about his rough ride four years ago, saying, "I'm not going to go there."

"Having a horse like Nyquist has given us an opportunity to really show everyone how we're here to serve the horses and see the love and care given to the horses," he said. "He's been a gift in many ways."

Besides O'Neill and Reddam, jockey Mario Gutierrez is along for the ride again, all having learned valuable lessons four years ago.

"We found out that time that we had success doing what we'd been doing all along," O'Neill said. "It worked, so we're just doing that again — same patterns, same style. We just want to stay on course. That's what's going to work. We know that now."

Baffert is back to saddle 12-1 shot Mor Spirit in pursuit of his fifth Derby victory and second in a row. He won in 1997 and '98 with Silver Charm and Real Quiet.

"I just hope I have a horse to root for turning for home," he said.

Steve Asmussen, Chad Brown and Todd Pletcher are taking aim with two horses each. Asmussen has Creator and Gun Runner, both co-third choices at 10-1; Brown has My Man Sam and Shagaf, a pair of 20-1 shots; and Pletcher has Destin and Outwork, both listed at 15-1.

Exaggerator is the early 8-1 second choice, trained by Keith Desormeaux and ridden by his younger brother Kent.

Trainer Dale Romans, who is 0-for-6 in his hometown race, saddles 12-1 shot Brody's Cause, saying the stakes-winning colt has done everything he needs to make it to the winner's circle.

Clearly so has Nyquist.

"Hopefully this year we'll have an American Pharoah-type of journey," O'Neill said.