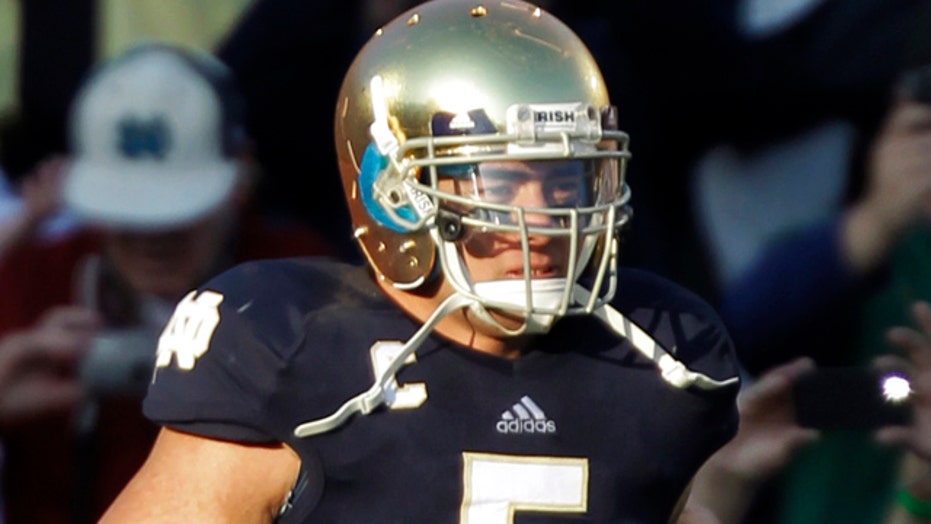 Does Manti Te'o suffer from the 'delusional disease'?

Three days after news broke about his fake dead girlfriend, Manti Te'o is still mum and Notre Dame has urged the star linebacker to speak up -- and soon.

Athletic director Jack Swarbrick said the school has encouraged the Heisman Trophy finalist to talk publicly about a hoax that turned the feel-good story of the college football season into one of the most bizarre in memory.

During the taping of his weekly radio show, posted online Friday, Swarbrick called on Te'o to explain exactly how he was duped into an online relationship with a woman whose "death" was faked by people behind the scam.

Skeptics have questioned statements from Te'o and Notre Dame, wondering why the player failed to mention he never met his girlfriend face-to-face, or tell the school about the ruse until Dec. 26 -- nearly three weeks after officials say Te'o learned he had been fooled.

"I don't have any specific knowledge as to how and when, but I can't fathom a circumstance where it doesn't (happen). I sort of share everybody's view that it has to happen," he said. "We are certainly encouraging it to happen. We think it's important and we'd like to see it happen sooner rather than later."

He said that before Deadspin.com broke the news about the hoax in a lengthy report Wednesday, Te'o and his family had planned to go public with the story Monday.

"Sometimes the best laid plans don't quite work, and this was an example of that. Because the family lost the opportunity in some ways to control the story," he said. "It is in the Te'o family's court. We are very much encouraging them."

Former NFL coach Tony Dungy, who mentored Michael Vick when he returned to the NFL after doing prison time, had similar advice.

"I don't know the whole case but I always advise people to face up to it and just talk to people and say what happened," Dungy said while attending the NCAA convention in Dallas on Friday. "The truth is the best liberator, so that's what I would do. And he's going to get questioned a lot about it."

Te'o led a lightly regarded Fighting Irish team to a 12-0 regular season and the BCS title game, where they were routed 42-14 by Alabama and Te'o played poorly.

He was said to be staying at the IMG Academy in Bradenton, Fla., where he and about 35 other NFL draft hopefuls were invited to work out. He has been projected to be a first-round draft pick in April, possibly among the first 10 picks.

Several athletes at IMG tweeted on Friday that they had seen Te'o on the sprawling campus. But he was never spotted by a group of reporters who waited nearby for a chance to ask him a question. His agent Tom Condon didn't return messages and the IMG Academy didn't respond to requests for comment.

"If I was still coaching and we're thinking about taking this guy in the first round, you want to know not exactly what happened but what is going on with this young man and is it going to be a deterrent to him surviving in the NFL and is it going to stop him from being a star," Dungy said. "So just tell the truth about what happened and this is why, I think, that's the best thing."

On campus, the mood was still supportive, though some students were looking for answers, too.

"I'd like to know more, but I'd like to give him the benefit of the doubt, that he's just being gullible," said Stephen Raab, a chemical engineer freshman from Bloomington, Minn.

Long Tran, who roomed with Te'o in his freshman and sophomore years, said he "wholeheartedly" believes his friend was the victim of the hoax, not a willing participant, as was suggested in the Deadspin report.

"Funny thing, I think he went to classes more than I did and I'm an engineering major," Tran said. "During regular season, he would barely go out. Most of the times, he didn't have the time to with his training schedule. He stayed focused 100 percent. I remember one time, a football player came into our room drunk and was talking to Manti, asking him why he didn't go out with them. Manti responded, `Because we have practice tomorrow.' He was definitely sociable. He knew most people in the dorm and everyone knew who he was, obviously."

Tran said he knew nothing about Lennay Kekua, the online girlfriend who supposedly died of leukemia during the season but, it turns out, didn't even exist. Tran said Te'o wasn't particularly tech savvy, saying the linebacker didn't own a laptop his first two years at college.

"He was using my laptop to do his homework. If he was Skyping his family he would use my laptop," Tran said.

Tran said Te'o kept a low profile and didn't date a lot. "Girls would come to the room and visit him and (Notre Dame cornerback) Lo Wood and hang out," he said. "But there was no talk of an official girlfriend or anything."

Deadspin reported that friends and relatives of Ronaiah Tuiasosopo, a 22-year-old who lives in California, believe he created Kekua. The website also reported Te'o and Tuiasosopo knew each other -- which has led to questions about Te'o's involvement in the hoax.

Swarbrick understands why there are questions

"They have every right to say that," Swarbrick said "Now I have some more information than they have. But they have every right to say that. ... I just ask those people to apply the same skepticism to everything about this. I have no doubt the perpetrators have a story they will yet spin about what went on here. I hope skepticism also greets that when they're articulating what that is."