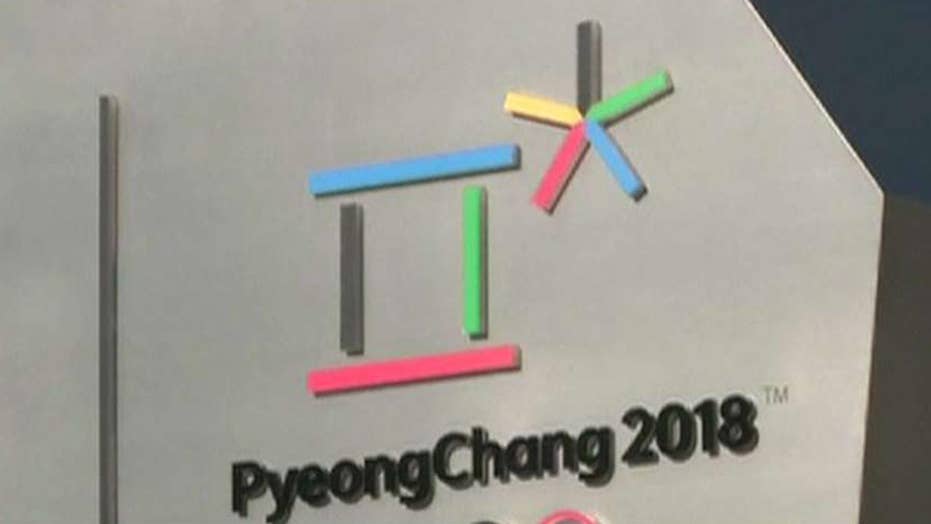 Nation sending 22 athletes to the games.

The Olympic rings with a sign of 2018 Pyeongchang Games is seen at the Imjingak Pavilion in Paju, South Korea, Friday, Jan. 19, 2018. (Associated Press)

The head of North Korea's most popular female band visited South Korea on Sunday to check preparations for an art troupe’s performance during next month's Winter Olympics.

Singer Hyon Song Wol also leads the 140-member art troupe and crossed the heavily fortified border into Gangneung, South Korea, where the troupe is to perform during the Olympics.

The games are scheduled for Feb. 9-25 in Pyeongchang, but some of the events will be held in Gangneung.

Hyon appeared live on South Korean television, but didn’t speak when she walked past a barrage of cameras and reporters before boarding an express train at Seoul's railway station, where hundreds of police officers mobilized to maintain order.

She has been the focus of intense South Korean media attention since she attended last week's talks at the border, when the two Koreas agreed on the Samjiyon art troupe's two performances — one in Seoul and the other in Gangneung.

Hyon and her six-member team were also scheduled to inspect two venues in the two cities for her art troupe’s performance during the two-day visit starting Sunday.

Photos showed Hyon smiling and shaking heads with a South Korean official upon arrival, which came just hours after the International Olympic Committee allowed 22 North Korean athletes to take part in the Olympics.

The athletes will include 12 women who will join South Korea's female ice-hockey team to form a unified Olympic team for the Koreas. Other sports events in which North Korean athletes will compete include figure skating, short track speed skating, Alpine skiing and cross-country skiing.

The North Korean athletes also will march together with South Korean players under a single "unification flag" depicting their peninsula during the opening ceremony in Pyeongchang.

The Olympic rings with a sign of 2018 Pyeongchang Games is seen at the Imjingak Pavilion in Paju, South Korea, Friday, Jan. 19, 2018. The head of North Korea's most popular girl band is visiting South Korea this weekend to check preparations for a trip by another art troupe from the North. (AP Photo/Lee Jin-man) (Associated Press)

"Such an agreement would have seemed impossible only a few weeks ago," IOC chief Thomas Bach said in Lausanne, Switzerland.

However, many South Koreans believe their government went too far by pushing athletes into a "political show" that will likely become meaningless once the lull in tensions breaks down after the Olympics.

Kim Hye-jin, a 39-year-old music instructor, said that South Korea was repeating an "outdated approach" in using sports diplomacy. She said that the previous unified teams and joint marches between the rivals never paved the way for sustained, meaningful engagement.

"We are always repeating meaningless things and North Korea isn't a country that will change easily," she said.

Plus, she said, a unified team takes away opportunities from South Korean athletes who have been working hard to prepare for the Olympics.

Heo Doo-won, a 40-year-old schoolteacher, didn't care for the reconciliatory gestures at all.

"Why are we doing this?" he asked. "We are clearly two different countries and it's better if things stay that way. I don't want a unified team or a unification flag. Why can't we just let the North Koreans march under their own flag?"

While South Korea's liberal president, Moon Jae-in, remains popular nine months into his term, the controversy over the hockey team factored in his approval rating dipping below 70 percent for the first time in four months, according to a Gallup Korea report on Friday.

But the inter-Korean effort to reconcile sparked after Kim expressed his willingness to improve ties and send a delegation to the Olympics in a New Year's speech. Hyon’s delegation was expected in South Korea on Saturday, but North Korea abruptly canceled the plan on Friday night before it proposed the two-day trip. It wasn't clear why the visit was rescheduled.

The Samjiyon art troupe, which comprises orchestra members, singers and dancers, is part of North Korea's Olympic delegation that also includes athletes, officials, journalists and a taekwondo demonstration team. As a sign of warming ties, Samjiyon's performances would be the first by a North Korean group in South Korea since 2002.

Hyon was a popular singer before she was appointed to lead the Moranbong Band, which serves as the "soft" public face of the Kim government. Its members in short skirts and high heels or stylish military uniforms sing and dance odes to Kim. There’s speculation that some of the Moranbong members may also appear in the Samjiyon art troupe.

South Korea hopes to use the Olympics to ameliorate relations with its rival after a year of tension over North Korea's rapidly expanding nuclear and missiles program.