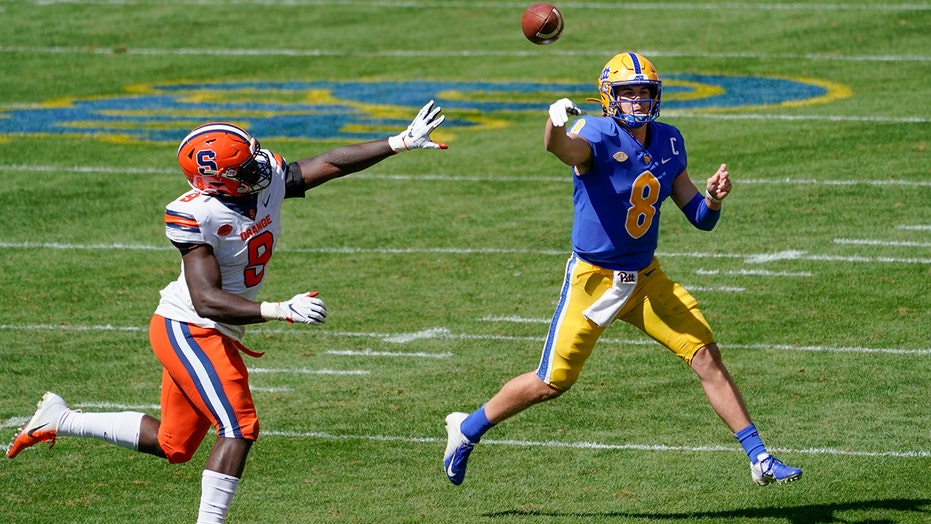 Pittsburgh coach Pat Narduzzi watched the Panthers put together a nearly flawless practice last Tuesday, one so close to perfect that Narduzzi admitted he practically had to invent something to complain about.

That won't be an issue going forward.

While Narduzzi remains high on his team, No. 25 Pitt still has plenty to work on following a sloppy 21-10 win over Syracuse on Saturday.

A week removed from a romp against overmatched Austin Peay in the opener, the Panthers (2-0, 1-0 Atlantic Coast Conference) looked very much like a work in progress against the Orange (0-2, 0-2). Seven penalties, three missed field goals and two turnovers allowed Syracuse to hang around well into the second half before Pitt finally pulled away behind a dominant defensive performance.

“It was a lot uglier than I’d like it to be,” Narduzzi said. "Disappointed more with just the penalties that we had, just some stuff that you don’t expect to have at all.”

Stuff Narduzzi told the Panthers “championship teams don't do.” Still, it's a lesson Pitt learned in a victory. It certainly beats the alternative.

“It was definitely a sloppy game,” said Kenny Pickett, who threw for two touchdowns and ran for another score. “Didn’t play the kind of football we need to play to go where we want to go. It’s almost good that it happened, we persevered.”

Having one of the best defensive front sevens in the country certainly helps. Pitt limited Syracuse to 171 total yards, 69 of them coming on backup quarterback Rex Culpepper's second-quarter touchdown strike to a streaking Taj Harris. Otherwise, Syracuse mustered very little in the face of an unrelenting pass rush.

The Panthers sacked Culpepper and starter Tommy DeVito seven times, rarely letting the quarterbacks get comfortable. Senior defensive end Rashad Weaver, who missed all of last season with a torn ACL in his right knee and was forced to sit out the opener due to mixed results on a COVID-19 test, recorded two sacks in his first game in 20 months.

Weaver woke up before 4 a.m. on Saturday ready to go. Afterward, the 22-year-old admitted he had grown unaccustomed to being out on the field.

“I’m going to get in the ice tub,” Weaver said. "I feel like I just got beat up by eight people at the same time.”

The game turned late in the third quarter when Pitt defensive back Paris Ford picked off a wayward screen pass by DeVito with the Orange in Panthers territory and only down four. Pickett drove Pitt 66 yards in eight plays, the final 17 on a touchdown pass over the middle to Jared Wayne.

Ford celebrated by dunking on a makeshift hoop the Panthers use as their version of the “turnover chain” popularized by Miami. Weaver joked he can't wait for an opportunity to throw down.

“If I get a strip sack, I’m going to put my whole elbow in it like Vince Carter,” Weaver said.

Syracuse: The Orange might have a brewing quarterback controversy on their hands. Culpepper, who beat testicular cancer in 2018, provided the only splashy play on his rainbow to Harris. DeVito spent most of the afternoon running for cover against one of the nation's top defensive lines. DeVito completed 9 of 15 passes for 32 yards and a pick while Culpepper went 4 of 9 for 88 yards and the score.

Syracuse coach Dino Babers said there are some packages the team has for Culpepper but seemed intent on sticking with DeVito as the starter for now. He's more concerned about protecting whoever is back there. The Orange have allowed 14 sacks in two games.

“At this stage of the game, we’re going to set the record (for sacks) and I don’t plan on setting the record in 2020,” Babers said.

Pitt: The defense appears to be every bit as good as Narduzzi expected. The long pass to Harris was a hiccup in an otherwise dominant performance. The offense, however, remains a bit of a mystery. The running back situation remains unclear heading into the teeth of a schedule that figures to get considerably tougher as the weeks pass.

The Panthers probably did enough to justify sneaking into the rankings last week but don't expect much upward movement until they have success against a team with a bit of a pedigree. No. 18 Louisville provides that opportunity next week.

Syracuse: The Orange welcome Georgia Tech to the Carrier Dome for the first time next Saturday when the Yellow Jackets visit.

Pitt: Continues a stretch of four straight home games to open the season when the Cardinals visit Heinz Field next Saturday. The former Big East rivals have met just once since Louisville joined the ACC, a 45-34 Panthers victory in 2015.