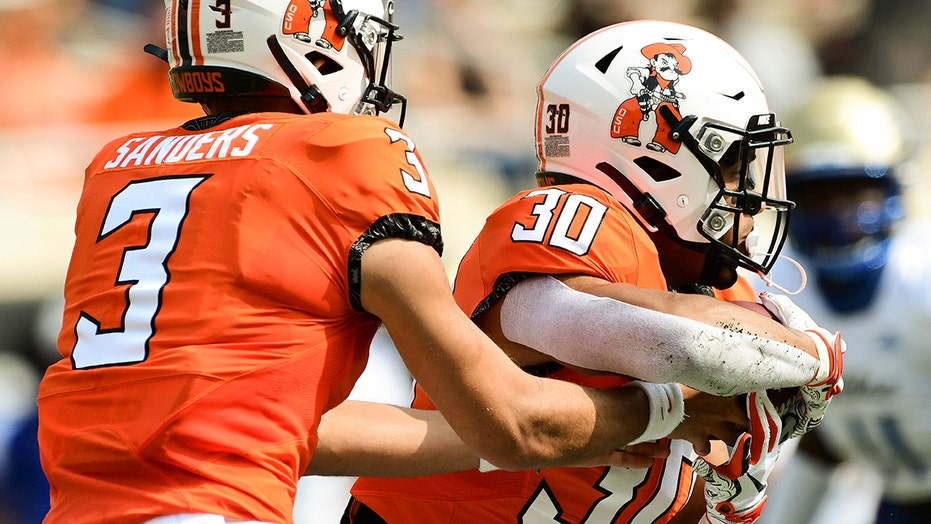 With Spencer Sanders’ status unclear for Saturday’s game against West Virginia, it is uncertain who will be at quarterback for No. 15 Oklahoma State in the Big 12 opener for both schools.

Will Sanders’ right foot injury, which caused him to leave the Cowboys’ season-opening 16-7 victory over Tulsa last week late in the first quarter, be healed enough for him to play? Will coach Mike Gundy start true freshman Shane Illingworth, who completed 4-of-5 passes for 74 yards to help lead the comeback victory in the fourth quarter?

Or will Ethan Bullock, a junior college transfer from the City College of San Francisco, get the start for Oklahoma State (1-0, 0-0 Big 12) after completing 8-of-13 passes for just 41 yards and an interception in about two quarters?

“We haven’t got that far yet,” Gundy said Monday. "We've got three guys available and we’ll have to make that decision based on practice reps.”

Sanders’ right foot was placed in a boot over the weekend. It will be a game-time decision on whether he starts.

West Virginia (1-0, 0-0), coming off a bye week that followed a season-opening 56-10 victory over Eastern Kentucky on Sept. 12, is going to be ready for whoever is at quarterback.

“I know (Sanders) is questionable for the game, but we are preparing as if he will play,” Mountaineers coach Neal Brown said. “I think that’s how we have to go about it, and we’ll adjust if he doesn’t.”

Five things to watch on Saturday:

The quarterback situation for the Cowboys will affect the running game, as it did last week after Sanders’ injury. The defense can take steps to try to minimize star running back Chuba Hubbard if they don’t have to worry as much about the pass. Hubbard, who led the nation in rushing last year with 2,094 yards (and was third with 21 touchdowns), wound up with 93 yards on 27 carries last week, including the winning touchdown in the fourth quarter, ending his 11-game streak of rushing for 100-plus yards. His contribution will be crucial Saturday, no matter who is at QB.

Three offensive starters will be making their season debut for West Virginia after they were among 11 Mountaineers suspended for the opener because of violations of team rules. Offensive linemen Junior Uzebu and Chase Behrndt, as well as slot receiver T.J. Simmons, who had 35 receptions for 455 yards and four touchdowns last season, will play after sitting out against Eastern Kentucky. The other players suspended, all backups, will be available, too. “I think there’s some anticipation, because Junior hasn’t played in a game, Chase hasn’t played in a game, but they’ve practiced really well,” Brown said.

A graduate transfer from West Virginia, Oklahoma State’s starting left guard Jeff Sills will face his former team Saturday. Sills played in 27 games, starting 24, for the Mountaineers, including the first two last year before a season-ending injury. He was part of a Cowboy offensive line that allowed six sacks last week, four against Bullock. “Josh has been really good for us, he’s come in and competed,” Gundy said. “He’s a good leader, he’s a great person, so we’re certainly glad that he’s on our team.”

Yes, it was Eastern Kentucky, but West Virginia enjoyed an outstanding day rushing in its opener. Leddie Brown gained a career-high 123 yards, along with two touchdowns, on just 10 carries in the first half, while also hauling in a 15-yard pass for a score. His backup, Alec Sinkfield, also established career bests with 15 carries and 123 yards, while also scoring two touchdowns. Overall, the Mountaineers gained 329 yards on the ground with five touchdowns. “Offensively, we ran the ball better than at any point last year,” Brown said.