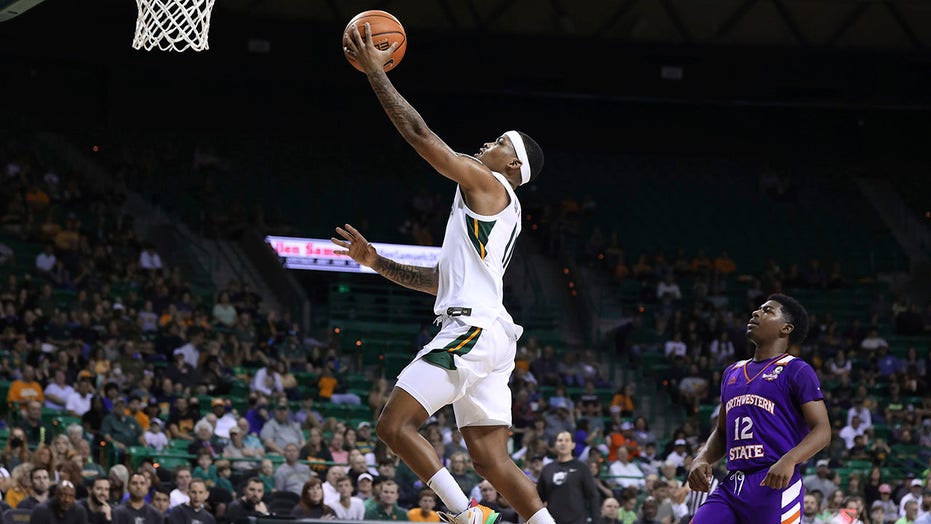 Baylor is going into Big 12 play with the No. 1 ranking and the nation's longest winning streak after another lopsided victory at home.

James Akinjo scored a career-high 27 points and added nine assists in the Bears' 104-68 win over Northwestern State on Tuesday night. It was the Bears' 18th victory in a row, a streak that started with their six NCAA tournament games last season on the way to their first national title.

"We’re excited. We have one of the best conferences in the country, so to be able to play against the best of the best every day, we’re really excited," said Adam Flagler, who added 21 points and 11 assists. "You can say it’s a tune-up, but every game we try to go out there and get better and work on things because we want to win the last game."

Baylor (12-0), which will play at eighth-ranked Iowa State in its Big 12 opener, scored the game's first 13 points against Northwestern State (3-11). Flagler had the first of his five 3s in the game-opening run.

Later in the first half, Akinjo started another 13-0 run with three consecutive 3-pointers in a span of 64 seconds — his only made 3s in the game.

"I thought James and Adam ... they really did a good job feeding each other," Bears coach Scott Drew said. "Anytime you can have your starting backcourt with 48 points and 20 assists, I think every coach would take that."

Akinjo played in his 78th college game, his 12th at Baylor since joining the team as a graduate transfer this year. He played 26 games at Arizona last season after beginning his college career with 40 games over two seasons at Georgetown.

Jeremy Sochan had 16 points, 11 rebounds and no turnovers over 33 minutes in his first career start for Baylor. Fellow freshman Kendall Brown had 12 points with nine rebounds.

Carvell Teasett scored a career-high 18 points on six 3s for Northwestern State, which has yet to defeat a Division I opponent this season.

"I think (this game) can really help Carvell because he missed the first 10 games. He’s back now, and he had a phenomenal first half," Northwestern State coach Mike McConathy said. "They found him and made it more difficult in the second half, but he’s a guy that can make shots."

Baylor scored more than 100 points for the first time this season and shot 50% from the field (39 of 78), even after missing its last 10 shots. The Bears also had a stretch in the first half when they missed 11 of 13 shots.

The Bears were without leading scorer LJ Cryer (foot issue) for the second game in a row, and Matthew Mayer was in COVID-19 protocol.

"I felt like we found the flow very easily," Flagler said. "We have guys that can step up and we’re a deep team, so a lot of guys stepped up today and we continued to play Baylor basketball."

Northwestern State: The Demons struggled with Baylor’s size advantage in all aspects of the game. In addition to being outrebounded 49-33, they were dominated in the paint 42-20. Northwestern State did have some success shooting long 3-pointers and finished 11-for-25 (44%) from beyond the arc.

Baylor: The Bears forced the tempo and outscored Northwestern State 37-13 in fast-break points. They also finished with 25 assists on 39 made baskets.

Baylor’s 18-game overall winning streak matches the fourth-longest ever by a Big 12 team in the league’s 26-season history. Kansas has had winning streaks of 20 and 22 games, and Baylor holds the league record with 23 in a row in the 2019-20 season. ... The Bears have won 21 consecutive home games, and 33 of 34. They have also won 36 consecutive nonconference games since November 2019. Both of those winning streaks are with average margins of more than 22 points a game.

Baylor: In Ames, Iowa, on Saturday to open 2022 against the Cyclones.