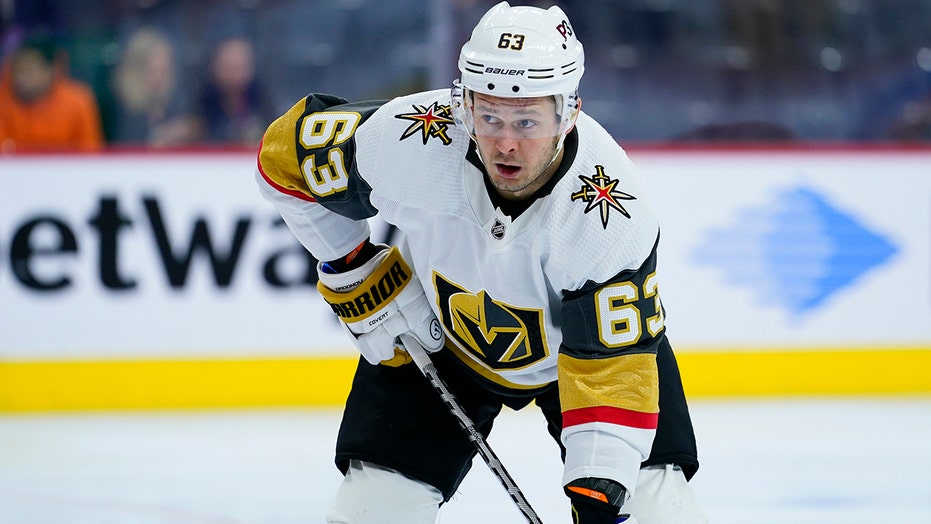 The NHL scrapped the trade of winger Evgenii Dadonov from Vegas to Anaheim over his no-trade list on Wednesday in an embarrassing end to a saga that dragged on more than 48 hours past the deadline and left the Golden Knights in a salary cap bind as they fight for a playoff spot.

The league voided the deal and said Dadonov’s limited no-trade clause "had not been complied with." Under the terms of his contract originally signed in 2020 by Ottawa, the 33-year-old Russian winger submitted a list of 10 teams to which he would not approve a trade.

While there is nothing in the rules stopping Vegas from making a post-deadline deal and sending Dadonov to a team not on his no-trade list, the team is expected to keep him. Any other decision, while permitted, could draw questions from the league office and players' union for a team that created its own cap trouble, been ravaged by injuries and lost seven of its past nine games to fall out of playoff position in the Western Conference.

The team said in a statement, "The Vegas Golden Knights recognize the league’s decision and welcome Evgenii back to our club."

Vegas tried to trade Dadonov and a future second-round pick to Anaheim for injured defenseman John Moore and the contract of inactive center Ryan Kesler, who has not played since 2019 and is not expected to resume his career. The goal was to clear salary cap space that could be used to activate captain Mark Stone and defenseman Alec Martinez off long-term injured reserve.

Dadonov filed his 10-team no-trade list to the Senators in late June 2021 prior to them sending him to the Golden Knights the following month. He did not agree to waive his no-trade clause for Anaheim when asked prior to the deadline Monday.

While it was not immediately clear how the trade was approved, a person with knowledge of the situation said the league's Central Registry was not at fault. The person spoke to The Associated Press on condition of anonymity because the details behind the trade being canceled were not announced.

His agent, Maxim Moliver, did not immediately respond to a message seeking comment.

"We respect and accept the decision made today by the NHL with regard to our trade with Vegas on Monday," Ducks general manager Pat Verbeek said. "Evgenii Dadonov is a player we thought could help our team this year and beyond."

Verbeek added his team will move forward and welcome Moore to the organization once he's healthy and ready to return. Anaheim acquired Moore on Saturday in the trade that sent defenseman Hampus Lindholm to the Boston Bruins.

Dadonov, who has 15 goals and 12 assists in 62 games with Vegas, counts $5 million against the cap this season and next. That money remains on the Golden Knights' books for the rest of the season, keeping them in a cap bind months since acquiring Jack Eichel and his $10 million cap hit in a blockbuster trade with Buffalo.

The Golden Knights as currently constructed would not be able to activate Stone ($9.5 million) and Martinez ($5.25 million) before the playoffs without further cap gymnastics. And that's if they even get there after getting passed in the standings by Dallas on Tuesday on a night they lost 4-0 at Winnipeg.

Dadonov in his eight NHL season in two separate stints sandwiched around time in the KHL. Dadonov has been playing in North America again since 2017 when he rejoined the Florida Panthers and would have been on his fourth team if the trade had gone through.

It is believed to be the first NHL trade voided since 2017, when Russian winger Alexander Korolyuk decided to remain in the KHL rather than continue his career in North America. The New Jersey Devils had agreed to trade Korolyuk to the San Jose Sharks, who said at the time the deal was contingent on him reporting to the NHL.