Whitlock: NFL tried to please everyone, not sure they can

Fox Sports 1's Jason Whitlock weighs in on the NFL's decision to require players to stand for the national anthem if they are on the field, tells Tucker better options could have been explored, like refusing to let kneeling players play. #Tucker

A decision from NFL owners requiring players to stand for "The Star-Spangled Banner" if they are on the field when the anthem is played triggered intense reaction from supporters and opponents Wednesday, as one owner revealed that he abstained from the vote.

"I want to work with my team to make sure everything we do is about promoting the right types of social justice reform and getting to a better America," said York, who added that he planned to meet with his players to discuss the new policy. 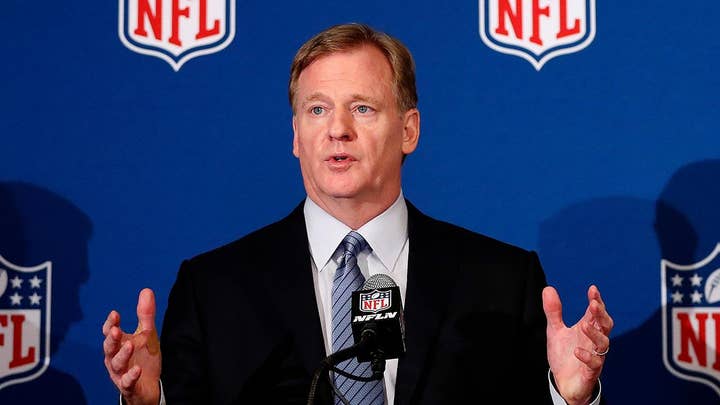 New York Jets chairman Christopher Johnson told Newsday that he voted for the new policy because "I felt I had to support it from a membership standpoint."

"[Y]ou have to understand that the plan we ended up with ... was vastly less onerous than the one that was presented to me late last week," said Johnson, who added that the team would not fine or suspend any players who choose to stay in the locker room while the anthem is played.

"I never want to put restrictions on the speech of our players," he said. "Do I prefer that they stand? Of course. But I understand if they felt the need to protest. There are some big, complicated issues that we're all struggling with, and our players are on the front lines. I don't want to come down on them like a ton of bricks, and I won't.

"If the team gets fined, that's just something I'll have to bear."

49ers CEO Jed York said, "I want to work with my team to make sure everything we do is about promoting the right types of social justice reform and getting to a better America." (AP, File)

York said other initiatives were in the works, including a suspension of all concessions sales during the national anthem.

"If we want to be sacrosanct, if we want to honor the flag, we've got to make sure we go through a litany of things," he said. "We're not going to force people to stand in their seats, but we're certainly going to make sure we're not profiting during that two or three minutes of time during the game."

HOW NFL NATIONAL ANTHEM PROTESTS HAVE EVOLVED SINCE KAEPERNICK

York's 49ers kicked off the protest debate during the 2016 season when quarterback Colin Kaepernick sat on the bench when the anthem was played, then got down on one knee as a protest against police brutality.

Other players took up the cause, and the gesture carried on during the 2017 season even after Kaepernick left the 49ers and failed to land a job with another team. Kaepernick and Eric Reid, a former 49ers teammate and fellow protester, have filed collusion grievances against the NFL.

The controversy even reached the White House, with President Trump telling supporters in September 2017: "Wouldn't you love to see one of these NFL owners, when somebody disrespects our flag, to say 'get that son of a b---- off the field right now, out, he's fired.'"

Vice President Mike Pence, who left a game between the 49ers and Indianapolis Colts this past October after some 49ers knelt during the anthem, tweeted a link to a news story about the policy change with the phrase, "#Winning." Donald Trump Jr., the president's eldest son, also tweeted about the story, saying he was "STILL NOT SICK OF WINNING!!!!" 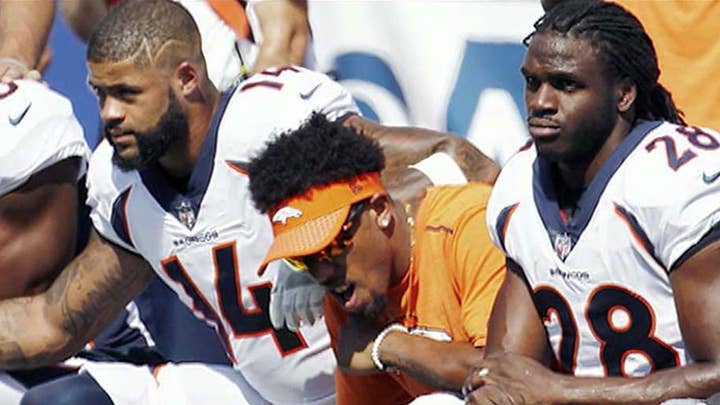 Sen. Cory Booker, D-N.J., told Fox News that the anthem policy "to me seems like the NFL is really undermining the very values that they profess to be protecting.

"Our flag stands for something. There are soldiers who have died for the ideals of that flag and the Constitution that it stands for and one of the most important elements to the Constitution, in fact our very First Amendment to that Constitution in the Bill of Rights was the freedom of speech," Booker said. "To me it is an affront to the ideals that I hold dear to a league that should be doing everything they can to represent those ideals that we all share."

Steelers guard Ramon Foster shrugged his shoulders when asked about the new policy, saying the owners will always hold an upper hand over the players.

"If the team says 'this is what we're doing,' and ownership (does too), you either deal with it or you're probably going to get cut," Foster said. "You can fight the resistance on that one, but same as we can't smoke marijuana because it's illegal in certain states, or it's legal in certain states, it's the same issue. You have to adhere to the rules and if not, they'll find a way to get you up out of there."

The NFL Players Association expressed skepticism about the new policy in a statement: "The NFL chose to not consult the union in the development of this new 'policy.' NFL players have shown their patriotism through their social activism, their community service, in support of our military and law enforcement and yes, through their protests to raise awareness about the issues they care about."

The statement added, "The vote by NFL club CEOs today contradicts the statements made to our player leadership by Commissioner Roger Goodell and the Chairman of the NFL's Management Council John Mara (co-owner of the New York Giants) about the principles, values and patriotism of our League."

The NFLPA did not immediately respond to questions about whether they would mount a legal challenge against the new policy.

Philadelphia Eagles safety Malcolm Jenkins, a prominent protester, said the owners had "thwart[ed] the players' constitutional rights to express themselves and use our platform to draw attention to social injustices like racial inequality in our country.

"Everyone loses when voices get stifled," said Jenkins, who added the Twitter hashtag, "#TheFightContinues" to his statement.

The NFL started requiring players to be on the field for the anthem in 2009 -- the year it signed a marketing deal with the military. Goodell insisted the league met with countless players over the last year to get their input on the fractious anthem debate anthem, which some have even pointed to as a major reason for the NFL's declining TV ratings.

"We think that we've come up with a balanced process, procedure and policy that will allow those players who feel they can't stand for the anthem to stay in the locker room," the commissioner said. "There's no penalty for that, but we're going to encourage all of them to be on field. We'd like for all of them to be on the field and stand at attention."

Goodell was asked who would get to decide what actions would be considered disrespectful to the anthem or the U.S. flag.

"Well, I think the general public has a very strong view of what respect for the flag is and that moment," he said. "We have language in our policy that talks about that, standing attention, hats off and focused. And I think the general arbiter will the clubs and the league and we'll work with our players to get their viewpoint also."