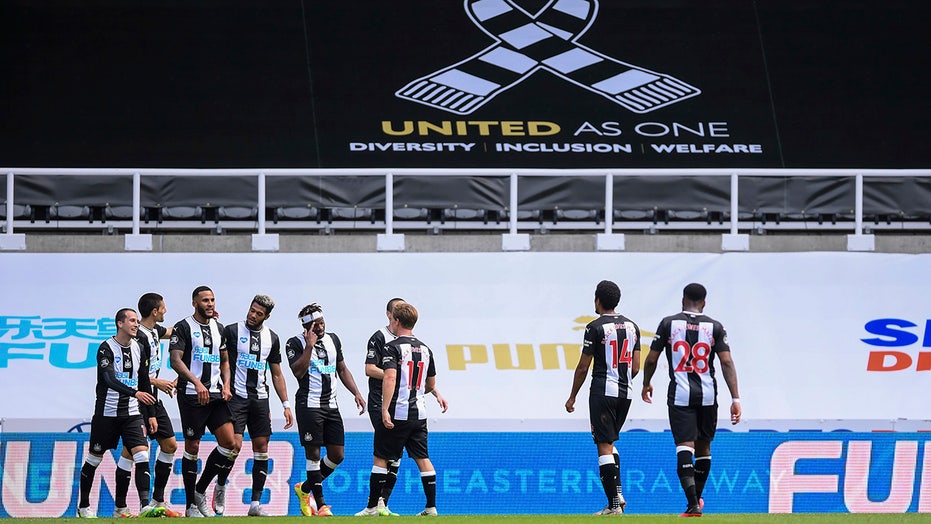 Newcastle beat 10-man Sheffield United 3-0 in the Premier League on Sunday to virtually guarantee its top-flight status for another year and make the club an even more attractive option for its controversial potential buyers.

Newcastle capitalized on the 50th-minute sending-off of Sheffield United center back John Egan for a second yellow card to score through Allan Saint-Maximin five minutes later, Matt Ritchie in the 69th and Joelinton in the 78th.

The win at an empty St. James’ Park lifted Newcastle to 38 points, 11 clear of the relegation zone with eight matches remaining.

The future of Newcastle has been one of the big talking points during soccer’s three-month shutdown, with Premier League officials currently deciding whether to approve a takeover of the northeast club by Saudi Arabia’s sovereign fund.

The deal is complicated by a recent ruling by the World Trade Organization that the Saudis facilitated sports broadcasting piracy of rights owned by Qatar’s beIN Sports — one of the Premier League’s broadcasting partners — while others have expressed concerns about the kingdom’s human rights record.

A decision on the takeover is expected in the coming weeks, by which time Newcastle might have mathematically ensured their survival and secured a fourth straight season in the lucrative top division.

Sheffield United was looking for a win that would have lifted the team into fifth place, currently a Champions League qualification spot pending Manchester City’s appeal against a two-year European ban for a serious breach of financial fair play rules.

This was the visitors’ second game since the restart, after drawing 0-0 at Aston Villa on Wednesday, and the game turned on the decision to hand Egan a second booking for pulling back Joelinton as they fought to reach the ball after a long clearance by Newcastle.

“Obviously the second one was a definite yellow card," Wilder said, "but the first one it is just ridiculous."

Five minutes later, Ritchie played a ball across the area, Sheffield United left back Enda Stevens completely missed his kick, and Saint-Maximin applied a finish at the far post past goalkeeper Dean Henderson.

The winger marked the goal by kneeling and raising his right arm into the air. All players, coaches and match officials did the same after the first whistle was blown in support of the Black Lives Matter movement.

Ritchie added a goal of his own with a fierce strike from the edge of the area, before Joelinton made up for an embarrassing early effort — when he was clean through on goal — by sliding in to convert Miguel Almiron’s cross.

It was only Joelinton's second Premier League goal and it came 301 days after the first.

“He’s a really genuinely good lad and he gives his all for the team," Newcastle manager Steve Bruce said, "so once you keep doing that and you’re a team player like he is, then you’re going to get the respect of everybody.

“He personally has suffered in the lockdown more than anybody. He’s had no family here, no friends, holed up in an apartment somewhere, so it’s been really, really difficult for the kid. So I’m delighted for him because he’s a really genuinely good pro and he can only get better.”