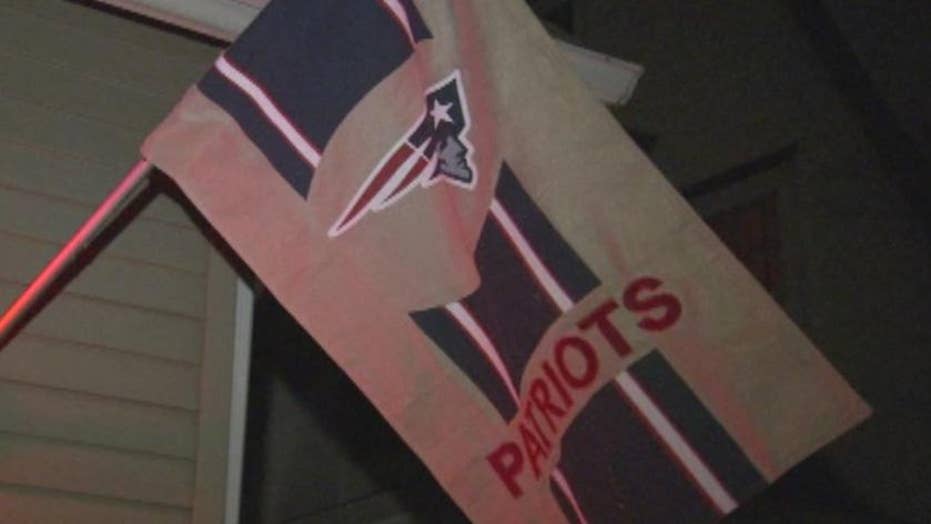 South Jersey mayor sends neighbors an 'ordinance' threatening to shut off their water if Patriots flag is not taken down, while they set up a light display of team spirit in defiance.

The Philadelphia suburb of Collingswood may sport a large display supporting the Super Bowl-bound Philadelphia Eagles, but it's another sports spectacle that's attracted the attention of the mayor.

Collingswood Mayor Jim Maley told FOX29 he recently took action, albeit a (probably) joking action, against his neighbors for flying a flag celebrating the New England Patriots, the Eagles opponent on Sunday.

"We've passed an ordinance to outlaw the flying of any flags that show colonial figures or any nationalism," Maley said.

Maley even made sure to send the family a letter, telling them if they refuse to take down the flag the borough will cut off their water.

A copy of the the letter the mayor of a New Jersey town sent to a family for having a New England Patriot's flag outside their home. (FOX 29)

"I really have not had any great reason to tell them it needed to come down," he said. "Frankly, with the success that they've had, it's been difficult to tell them that. But things change this weekend."

The mayor's tongue-in-cheek letter ended up escalating things on Virginia Avenue, and now the home has added Patriot's logos projecting all over the outside walls.

"My father had season tickets to the Patriots, he raised me as a Patriots fan," homeowner Greg Jerome told FOX29. "He'd bring me to the games when I was younger as a kid so just die-hard Patriots fan through and through. No matter where I moved to I was going to represent the Patriots no matter what."

The Connecticut-native said he decided to turn-up the off-field feud after receiving the letter.

"You're going to turn off my electricity now too?" he said.

Jerome said he was able to put together his Patriot's-themed display by stopping by the clearance section of a nearby store.

SUPER BOWL FANS SHOULD STAND FOR THE ANTHEM -- WHEREVER THEY ARE, SOUTH CAROLINA GOVERNOR SAYS

"I thought it was an indication that there's a Patriot left in the Philadelphia area, it's showing you a sign there," he said.

Regardless of this fight he now has with city hall, the Collingswood resident said he's glad this recent rivalry is bringing residents together.

"Just this kind of comradery we have as sports fans, that's what sports are really all about," he told FOX29.