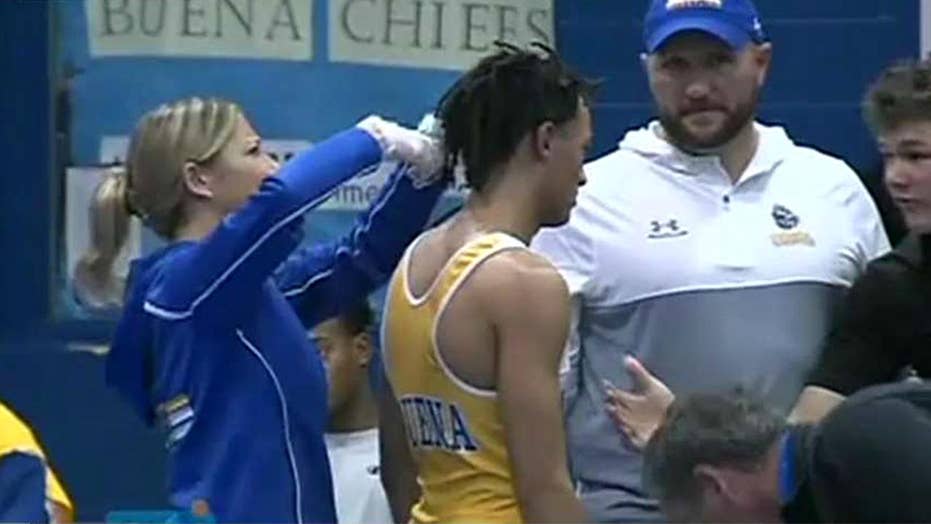 A New Jersey school district has said its wrestling team will no longer compete in events officiated by a referee who told one of its athletes to cut his dreadlocks before a match or risk a forfeit.

The announcement was made during an emergency meeting Wednesday with the Buena Regional School District and members of the community.

Last week, Buena Regional High School wrestler Andrew Johnson, who is black, was captured on a video obtained by SNJ Today receiving a haircut from an athletic trainer. Johnson had a cover for his hair, but referee Alan Maloney, who is white, said it wasn't acceptable. Johnson went on to win his match against a rival from Oakcrest High School but appeared visibly upset.

Andrew Johnson won his match after he was forced to cut his dreadlocks. (Michael Frankel/SNJTODAY.COM via AP)

The video sparked outrage from the likes of Olympic gold medalist Jordan Burroughs and New Jersey Gov. Phil Murphy among others.

The organization that assigns referees to matches, the New Jersey Interscholastic Athletic Association [NJSIAA], previously stated over the weekend that the referee would not be assigned to any more games until further notice.

Maloney previously came under scrutiny in 2016 for using a racial slur against a black referee, the Courier-Post reported. Maloney said at the time he did not remember using any racial epithets at that event but accepted witness accounts that he did. After the incident was reported, he agreed to participate in sensitivity training and an alcohol awareness program. His one-year suspension was overturned.

The high school’s wrestling coach and athletic trainer discussed the incident with board members behind closed doors Wednesday.