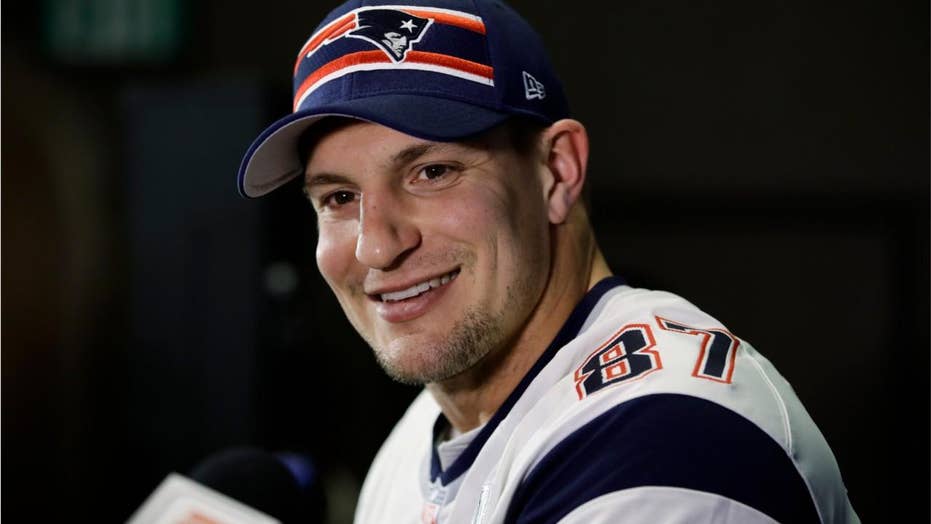 Former New England Patriots' tight end Rob Gronkowski shocked fans when he made his debut as a Los Angeles Lakers cheerleader at the teams halftime show.

Former New England Patriots’ tight end Rob Gronkowski may have hung up his jersey in March, but the three-time Super Bowl champion took center court at the Staples Center Tuesday night to try his hand at something new.

Dressed in a bright yellow uniform with gold trim, the 6’6” 265-pound former pro danced alongside the Laker Girls during the half of the Los Angeles Lakers - Oklahoma City Thunder matchup.

GRONKOWSKI WILL BE IN MIAMI FOR SUPER BOWL AS PARTY HOST

An enthusiastic Gronk appeared to hit (almost) every move.

He was also joined by tennis pro Venus Williams and comedian James Corden.

Venus Williams and Rob Gronkowski laugh after participating with the Los Angeles Lakers girls during halftime of the game against the Oklahoma City Thunder at Staples Center on Nov. 19, 2019, in Los Angeles. (Jayne Kamin-Oncea-USA TODAY Sports)

Gronkowski’s appearance at the Staples Center came hours after he announced that, despite retiring from the NFL in March, he will be hosting a Super Bowl party in Miami.

“I may not be playing the game this year, but I will still be going to Miami and I'm going to be debuting my very own music festival and its Gronk Beach,” he said. “I mean, you can't ask for any other situation that better than that.”