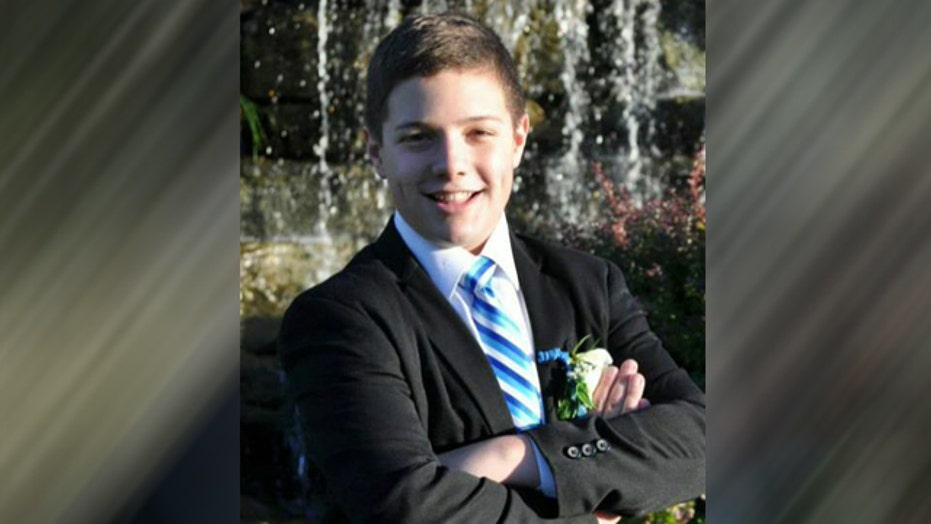 Of the 2,430 Major League Baseball games this season that will open with the singing of the national anthem, one performance this weekend will carry a special emotional tribute and resonate with inspiration and faith.

On Saturday night, when the New York Yankees take the field against the Kansas City Royals at Kauffman Stadium in Kansas City, the familiar tune will be sung by 14-year-old Reat Griffin Underwood. His rendition will be shown on video, because the high school freshman was one of the three victims who was shot to death in a suspected hate-crime attack in Overland Park Kansas on April 13.

"That was one of the things that he wanted to do, which was to audition for a game. He loved to perform," said his mother, Mindy Corporon. "It's going to be amazing. He's going to know it, because he's not here physically but his spirit is with us."

Reat was killed when he went to an audition for the "KC Superstar" singing competition, a local "American Idol"-type presentation being held at the Jewish Community Center of Kansas City. As he and his grandfather, 69-year-old retired doctor William Corporon, were getting out of their truck in the center's parking lot, police say 73-year-old former Ku Klux Klan leader Frazier Glen Cross walked up to them and opened fire. Both were killed instantly.

Cross is also charged with murdering Terri LaManno, 53, outside the nearby Village Shalom Jewish retirement home.

Cross, a former so-called "grand dragon" of the Ku Klux Klan, is described as "a violent white supremacist" by the Southern Poverty Law Center. Cross has a history of anti-Semitic behavior as well as hatred aimed at minorities, and had founded the Carolina Knights of the Ku Klux Klan in his native North Carolina and the White Patriot Party, SPLC officials say.

But Reat's mother wants the message of the tragedy to be about hope and faith. She also says the offer to show her son singing came as a surprise.

When she got that call, "I cried."

The video was recorded last August when Reat sang it in front of 1,100 people at the annual Blue Valley Educational Foundation breakfast at the Overland Park Convention Center.

Saturday’s pre-game event is not only intended to honor the victims, but also, Reat’s mother says, to highlight the power of faith. Reat's family and friends will be donning T-shirts with the logo "Faith Wins" on the front. Printed on the back are these lines: “Hate tried to divide us but love always wins; Evil tries to destroy us but good always wins; and Fear tries to defeat us but faith always wins.”

"We are going to show our community and the nation that faith wins," says Corporon, who told Fox News the commemoration "is more than just singing the national anthem, but to spread the message that faith wins ... when you have faith, God exists and when heaven is available to you, when you are climbing that mountain and you are in that valley, you have strength."

The family has started a foundation, Faithalwayswins.org, and the Reat Griffin Underwood Memorial Fund as a lasting tribute.

"The Royals are honored to remember these precious souls in a special way," said Toby Cook, the team's Vice-President of Community Affairs and Publicity.

In a statement to Fox News, Cook noted that "immediately following the tragedy, the entire Kansas City area reacted with shock and horror, followed by tremendous support for the families of the victims. We hope this tribute for Mrs. LaManno, Dr. Corporan and Reat will further the healing process for the families and the community that supports them."

Terri LaManno's husband and two children will also be recognized, as well as other members of the Corporon family and the first responders who tended to the shooting scene from the Overland Park Police, Fire, and Paramedic departments.

The stadium announcer will introduce the video by telling the crowd that "it was Reat Underwood's greatest wish to sing The Star-Spangled Banner at a Royals game. Tonight we honor that request in his memory ... as we pay respect to our flag and country as we honor America with this video performance of our national anthem by Reat Underwood."

Fans in the nearly 38,000-seat stadium will certainly be moved and also reminded of a higher power, Corporon hopes.

"Heaven is all around us," she said. "We just have to listen and feel it. I really believe that. The more we rely on God and knowing there is a God, the stronger we can be."