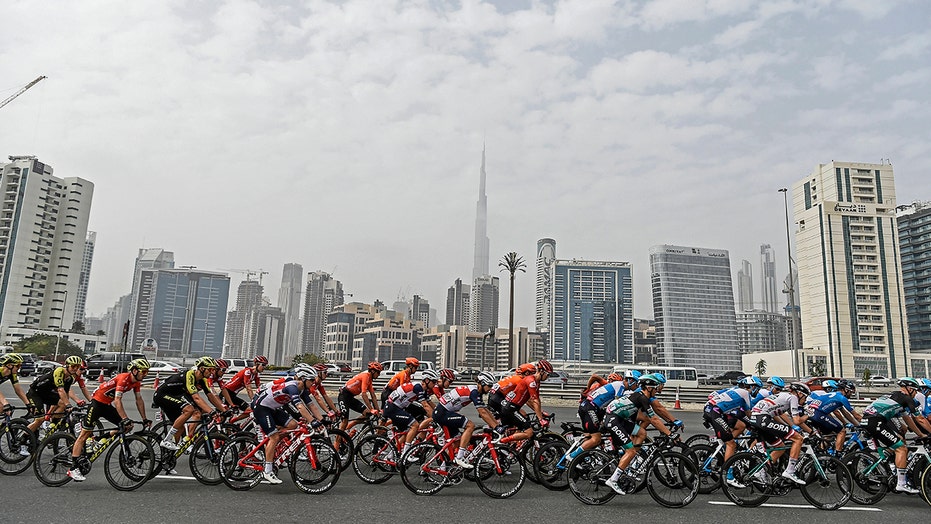 Six more people with links to the canceled UAE Tour cycling race have been infected with the virus spreading around the world.

The Ministry of Health in the United Arab Emirates said in a statement that two Russians, two Italians, one German and one Colombian have been diagnosed with the virus. They were all linked to two previous cases involving Italians, it said.

Rider Igor Boev of the Gazprom-RusVelo team told Russian news agency RIA Novosti that he was in the hospital after being diagnosed. Boev said he was waiting for more test results and said the hospital food was “more than fine for a normal person but not enough for a pro rider.”

Riders from other teams are staying in isolation in case they develop symptoms. Arnaud Demare of Groupama-FDJ posted a video of makeshift fitness routines in his hotel room and eating food delivered in a paper bag.

The UCI said Abu Dhabi authorities ordered riders and staff from Groupama-FDJ, Gazprom-RusVelo and Cofidis to be isolated until March 14. They're all staying on the same floor of a hotel.

Cofidis team president Thierry Vittu said Wednesday it was a relief to have a deadline for when riders and staff could leave, even if it's still some time away.

“Now we know where we stand, and even if the confinement in the room continues, everyone will manage to find occupations, distractions, activities,” he said on the team website. “We are going to stay in solidarity with each other, conscious that we are living a collective adventure, that we would have liked not to live, but which will teach us about ourselves and others. We already tell ourselves that in a few months, we will be laughing about it among ourselves.”

The last two stages of the UAE Tour were canceled on Feb. 28 after two virus cases among team staff members. British rider Adam Yates was declared the winner because he was leading after the first five stages.

In Italy, soccer officials said the second leg of the Italian Cup semifinals between Napoli and Inter Milan scheduled for Thursday in Naples has been postponed indefinitely.

The other semifinal match, Juventus-AC Milan, scheduled for Wednesday had already been postponed.

Ten Serie A matches scheduled over the past two weekends have also been postponed.

German soccer club Borussia Dortmund on Wednesday canceled a preseason tour of Asia because of the virus outbreak, while some fans have been asked not to attend a Bundesliga game this weekend.

Dortmund apologized to fans in Asia, saying that the planned tour of China and other countries couldn't go ahead because it is “not possible to make safe travel arrangements.”

Dortmund is to play at title challenger Borussia Mönchengladbach on Saturday. That is the closest Bundesliga team to the area of Heinsberg, where a cluster of virus cases have been reported.

Following talks with regional government officials, Gladbach said the game would go ahead but asked fans from Heinsberg not to attend. They will be offered a refund and a free ticket to a European home game next season.

The French league is trying to reduce players' physical contact at games. The league said players won't have to shake hands with their opponents, and the players and referee will hold child mascots by the shoulders, not by the hands.

In tennis, players will have to handle their own towels at an Italy-South Korea Davis Cup qualifier scheduled for this weekend — freeing ball kids of the duty.

The match in Cagliari, Sardinia, could be called off or played in an empty stadium, however.

The International Boxing Association postponed its congress from March 20 to June 20, citing concerns by Hungarian authorities about delegates from countries with virus cases. The Hungarian capital of Budapest remains the host despite the delay.

The congress was a key step for the association, known as AIBA, to restore confidence after years of infighting and financial crises.

AIBA was barred last year from running the Tokyo Olympic boxing tournament after the International Olympic Committee criticized its leadership and questioned the integrity of its judging and refereeing. AIBA said interim president Mohamed Moustahsane, a former ringside doctor, would remain in office until the new June congress.