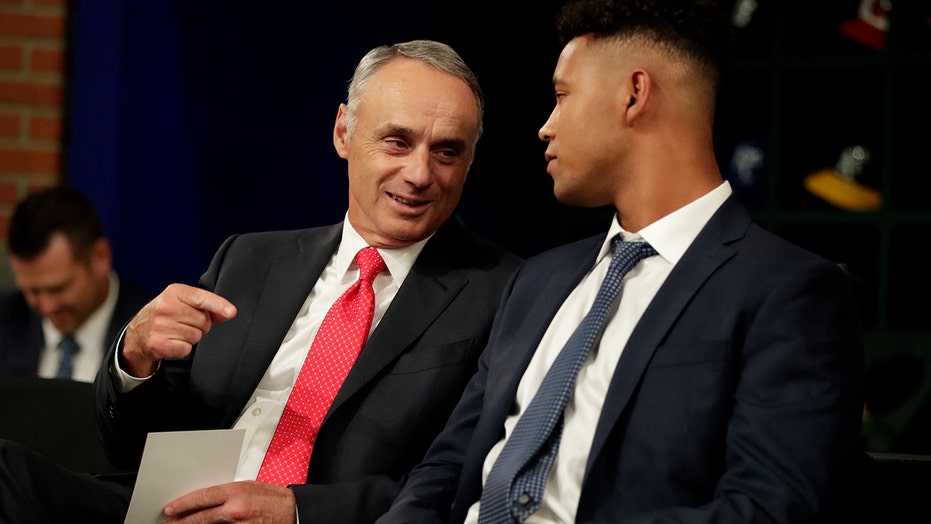 Major League Baseball will cut its amateur draft from 40 rounds to five this year, a move that figures to save teams about $30 million.

Clubs gained the ability to reduce the draft as part of their March 26 agreement with the players’ association and MLB plans to finalize a decision next week to go with the minimum, a person familiar with the decision told The Associated Press. The person spoke Friday on condition of anonymity because no decision was announced.

Teams made the move with the season delayed by the coronavirus pandemic and the sport trying to cut expenses to cope with revenue loss.

“Particularly given the negligible economic impact to what’s already a cheap acquisition cost, this approach is is grossly shortsighted," said agent Jeff Berry, co-head of CAA Baseball. "To drastically reduce opportunity and talent and talent pools, it stunts growth and diversity at all levels and is really a self-inflicted sabotage of the long-term health and popularity of the game."

The start date of the draft will remain June 10 and the deadline to sign likely will be pushed back from July 10 to Aug. 1, the person said. The draft will be cut from three days to two.

As part of the agreement with the union, slot values to determine signing bonus pools will remain at 2019 levels and players passed over in the draft are limited to signing bonuses of $20,000 or less. That might cause more high school players elect to go to college. And because of the NCAA’s limit of 11.7 baseball scholarships, the change may lead to more prospects attending junior college.

“You can’t afford to live when you sign for $20,000 in the minor leagues," agent Scott Boras said. “They also may develop in college to be first rounders, which is the category we’re looking for. So so it gives you more opportunity to have more first rounders.”

Berry said the decision was part of “furtherance down that slippery slope of diminishing the value and the importance of players" and linked it to other moves players decry and to the Houston Astros' cheating scandal.

“For any ownership group that supports this course of action as advisable or, frankly, is so cash-strapped that this mid-six-figure savings is a financial necessity, they should do everyone a favor, including their fellow owners, and sell their franchises," he said. “Does anyone think it’s that big of an ethical jump from hijacking the draft, tanking and service manipulation to hidden cameras and banging on trash cans? All those behaviors and attitudes, they're not analytic or intelligent or efficient, they're just unethical, and they reveal a lack of respect for players and fans.”

All but six of last year’s sixth-round picks signed for $200,000 or more. Chicago Cubs catcher/first baseman Ethan Hearn had the highest bonus of the round at $950,000, deciding to sign rather than attend Mississippi State.

“On every major league team, development and scouting departments are extremely upset about this," Boras said. “This is strictly about minimal short-term economic benefit that could cost millions of dollars, with the loss of a No. 1 pick being injured or a No. 1 pick not developing to the full stature of his potential.”

Signing bonus pools started in 2012 and limit the amount of money teams can spend. Each slot in the first 10 rounds is a signed a value — the range last year was $8,415,300 down to $142,200 -- and each team’s values are added to a form a pool. Signing bonuses in the first 10 rounds count against the pool along with the amounts above $125,000 of players selected after the 10th round or who were bypassed in the draft and then signed.

A team that exceeds its pool is taxed, and a club more than 5% above loses a first-round draft pick the next year -- a threshold never reached.

Players turned down a proposal last week that would have kept rounds 6-10 in exchange for cutting their slot values in half.

As part of the deal with the union, teams have the right to cut the 2021 draft to as few as 20 rounds. That fits in MLB's proposal to cut their minimum minor league affiliations from 160 to 120 in 2021, allowing each organization to drop one farm team.