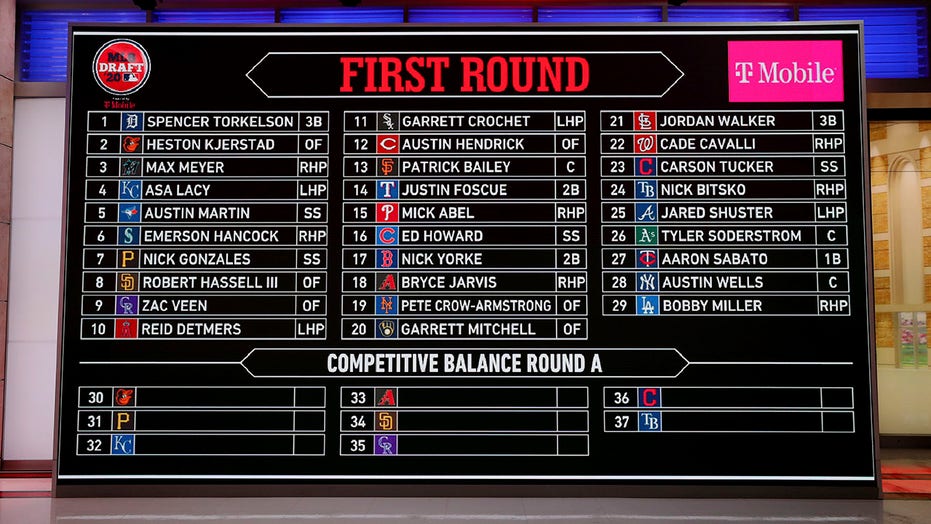 Before the first pick was made, Major League Baseball delivered a message: The sport stands fully behind the Black Lives Matter movement.

At the outset of the amateur draft broadcast Wednesday night, Commissioner Rob Manfred said “this moment is a call to action” and baseball “can do more as an institution” to combat systemic racism and inequality. Executives from all 30 teams working remotely held up signs that read: “Black Lives Matter. United For Change.”

The baseball operations officials were joined by MLB and club owners in announcing donations to several organizations that support and fight for racial justice, including the NAACP Legal Defense and Education Fund; Equal Justice Initiative; Color Of Change; Campaign Zero; and the Jackie Robinson Foundation.

“While we compete with each other on a daily basis,” New York Mets general manager Brodie Van Wagenen said on a Zoom call, “this was a conversation that started internally among that group. And it was a conversation that is happening across our country right now. And we felt like this was an opportunity and a platform ... to be in front of a national audience.

“We have a systemic racism problem in the country. It affects all of our institutions. Baseball isn’t immune to it. And the way we discussed it was, we have to have a voice. We can’t sit quietly and watch the pain and suffering that continues to happen throughout our country, watching history repeat itself, and not say something — which we collectively have. So that’s where the united for change comes, is that we were doing this together. We felt like we could amplify the Black Lives Matter message,” he added. “We’re in a position both from a voice standpoint but also from a financial standpoint to be able to try to make an impact, and this was hopefully a first step of action.”

Manfred, speaking from a podium at MLB Network studios in New Jersey, began his opening remarks by thanking the inspirational “front-line heroes” who are helping fellow citizens during the coronavirus pandemic and saying some of them would be honored throughout the broadcast.

Then he turned to the recent protests that have occurred all over the nation and the world.

“For many reasons, these are unprecedented times in our country, and also painful times. We share in the sadness and outrage that has resulted from the national tragedies that include the deaths of George Floyd, Ahmaud Arbery, Breonna Taylor and others,” Manfred said.

“Tonight, I join our 30 club baseball operations officials as they recognize on behalf of our entire industry, that systemic racism and inequality are devastating problems. That we can each do more to help. That baseball can do more as an institution. That black lives matter, and that we are united for change. This moment is a call to action, to acknowledge the ills that exist, to show solidarity with the black community in its efforts to end racism and injustice. We want to utilize the platform afforded by our game to be not only allies, but active participants in social change.”